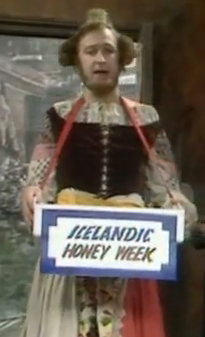 For those without comedic tastes, the so-called experts at Wikipedia have an article about Sigur Rós.

The lead vocalist (along with several unexpected events of aid by Kjarri the Beardful), and fóunder (with Goggi The Suave), of the band. He's known for making inhuman animal noises noises on most of the albums, being a part of the endangered species of Jónsi whales, being a gold-medal winner of reaction images for Sigur Rós-obsessed Tumblr users, and many other silly antics. He likes to go off and make albums with his boyfriend, mythical Icelandic creatures, and natives from Hawai'i when the rest of the band goes off and has babies without him. Most notable is his band that goes under the name "Jónsi", an "...(insane), pop album" he made with four other musicians that he never really had known for much and liked to sing "Happy Birthday" in Icelandic with on tours. Another notable side-project which received an international backlash due to it's racist themes was "Riceboy Sleeps", which was a collaboration with his boyfriend, Alex Somers, which actually includes the mythical Icelandic creatures and natives from Hawai'i that were mentioned before. It was also played live with the help the Latavian National Choir. He was blinded in the left eye with an icicle on a tour by Björk, or as others believe, in a bar fight in London. Others maintain that it was damaged by Kjarri's prickly beard, as he once drunkenly attempted to kiss him for a photoshoot.

The guitarist of the band, and a suave man with an incredible suavity which must only be a gift from Odin himself. His incredible coolness with cameramen and interviewers, and relatively average wardrobe, has earned him the role of "The Normal-looking Dude" in Sigur Rós. He's also quite famous for attacking Tom Cruise (read below), smiling more often in group photos, actually speaking in interviews, and not having his surname end in "-son". It is rumored that he's half-puffin and sending money home to his puffin family instead of supporting local economies. He's a pretty awesome man, but in all honesty, there isn't much to write about him either.

A man of few words. Has a strong grudge against cats, speaking in interviews, smiling, and other social acts. He's cool, though.

Mr. Dýrason is part of an underground society of Icelandic troll-elf hybrids that travel the country, stealing innocent tourists Lopapeysas before they can go back to their home countries and brag to all of their acquaintances of how hipster they are because they got those sweaters as a souvenir. Before involving himself in the full-time citizenship of the organisation, he would be seen strongly supporting it.

In late 2010, another group started with the help of him was founded in hopes of raising awareness of the Lopapeysa incidents, though a massive influx of Orri fanatics decided to join, and flooded the forum on the organisation's site with cheaply photoshopped pictures of a pairing called "Kjorri", which involves Kjartan Sveinsson and himself in a homoromantic relationship. When asked about his thoughts on the event, his only response was "...".

Sigur Rós were formed in 1994 by Jónsi Þór Birgisson (guitar, sea-mammal mating calls), Georg Hólm (bass, tuba) and Ágúst Ævar Gunnarsson (jazz flute), they were later joined by Kjartan 'Kjarri the beardful' Sveinsson (piano, wind chimes, foghorn) and Orri Páll Dýrason, who arrived at a practice one day banging a leather suitcase with a human femur and refused to leave.

Their first album, Váúúúggghhhn (1997), was a humble release that the band themselves recorded, printed and slipped into issues of House & Garden at gas stations around Reykjavik. Early gigs were mostly spontaneous, the band becoming known for playing unannounced in parking lots, ATM vestibules, fishing trawlers and often disrupting local events, funerals and super-market openings. 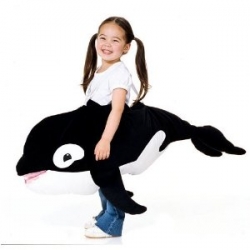 Sigur Rós recorded their second album Áæéæðáú býæðí(1999) in Jónsi's bathroom. It was when David Attenborough used Sigur Rós on the soundtrack to his controversial documentary on the Gay Whales in Darfur, that the band became an international sensation. Their initial success in the United States however, was largely due to a marketing error which saw the album released in packaging that implied that the music was performed by a singing whale named Björn.

Furious at the mistake resulting in their success in the USA, the band recorded (*3*), a far darker album than before, with unintelligible lyrics, castrati wailing, screeching, violent distortion, and the occasional twinkling music box. (*3*) became a worldwide hit despite this, when a track on the album was featured in the movie Vanilla Sky. Sigur Rós were invited to the USA to attend the film's premier, but were asked to leave after bassist Georg sprayed Tom Cruise with a fire extinguisher, claiming that he mistook the actor for the mischievous cave-troll Grýla. Ágúst went missing at some point during the ensuing riot, and is rumoured to be living in an Amish commune in Indiana.

The band would go on to tour worldwide, their shows becoming increasingly violent. Critics have remarked upon the 'suspicious' nature of song titles at the time, such as 'The Death Song' and 'The Kill the Audience Song'. Concert-goers at the time reported witnessing audience members bleeding at the ears, being sent into apoplectic fits and even instances of spontaneous human combustion. The band eventually calmed down, and found time to record their next major release, 'Takk...' as a 'thank-you' to fans that had stuck with them despite their attempts to alienate and sometimes destroy them.

During this time, pop-star, ambassador to Iceland and known eccentric Björk was outspokenly distraught at another Icelandic act gaining worldwide attention, claiming that Sigur Rós 'stole a leaf out of my book of fucked-up sounding leaves'. Unreliable sources claim to have seen the singer lurking backstage, and once attacking frontman Jónsi during a gig with an icicle, leading to him being blinded. Luckily, Jónsi had long since been capable of navigating via sonar.

Sigur Rós released Með fiski í eyra ég öskra endalaust in 2008. The band had by this time adopted a number of eccentric habits. Jónsi became increasingly paranoid on tour and would only eat salad leaves arranged in concentric spirals. Orri wore a hat made of dried seaweed and teeth onstage, and Georg and Kjartan would throw raw fish to their fans. Following a tour in which the band would fire cannons of confetti, asbestos and hard candy into the crowd, Sigur Rós announced that they would be taking an indefinite hiatus.

Georg and Orri focused on raising families, Kjartan took time to compose a seven hour choral piece entitled Spennanditilfinning on Ice!, and Jónsi went on to find solo success with his cooking and lifestyle show, Show me the Hrárspínat. As of 2011, rumours persist that Sigur Rós have indeed found time to record a new album in the men's room of a local vegan restaurant, and that it will be released sometime in 2012. It will, as unreliably cited by a mysterious newspaper in Höfn, "be the sonic recreation of an orgasm".