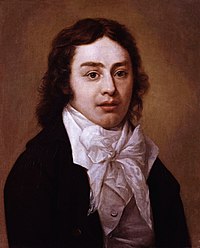 This page is about the nineteenth century English poet. For someone with not even the most tangential links to Coleridge's life and works, and dissimilar in name, see Mr. T.

Samuel Taylor Coleridge (31 October 1772 – 4 July 1834) was a Romanto–Celtic Freemason, communist, wordsworth, wordsmith, musician, and bard of the 18th and 19th centuries. He was skilled in the lyrical arts, general horseplay, and vices such as debauchery, tomfoolery, drinking, and the use of hard drugs. Coleridge said, "Methinks lest I die, it shall be because I taketh too much gin and juice."

Coleridge is probably best known for his poem The Rime of the Ancient Mariner. Since any fuckwit knows that it's spelt 'rhyme', not 'mariner', we can safely conclude Coleridge probably suffered from severe dyslexia and hence stole almost all of his poems from Patron Saint Oscar Wilde. He also wrote a poem entitled "Xanadu", but he was pretty messed-up at the time after tripping for some inspiration on that one, and did not complete it. Thus, this work was later finished by Neil Peart and Olivia Newton-John.

Coleridge is also famous for triggering the Albatross War between humans and albatrosses after killing an albatross, dipping it in gold, and wearing that bling on the cover of his bestselling phonograph album The RYYYHME of the Ancient Marinader. The provocation lead to his death in 1834 at the hands of a albatross gang, and later to the war which continues to this day.

After Coleridge's death his fame as a musician increased greatly, leading to a series of albums released posthumously under his stage name, S.T. Cole. Increasingly desperate attempts to cash-in on his legend led to a series of ill-conceived duet albums, where living people attempted to pretend the dead guy was still there and singing with them, ultimately cheapening the legacy of the greatest albatross killer in history.

For those without comedic tastes, the so-called experts at Wikipedia have an article about Samuel Taylor Coleridge.

In 2003, Coleridge was listed in The Observer as one of the 50 Funniest Acts in British Comedy.