For those without comedic tastes, the so-called experts at Wikipedia have an article about Ryan Tubridy. 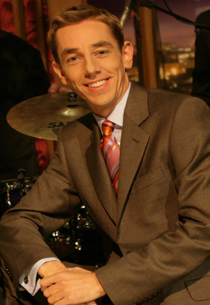 “How does this bollocks get on TV?”

“You really need to eat, Brian.”

“I am delighted to finally meet you Ryan. I have always been a fan of American Idol.”

Ryan Tubridy is a former Irish pornstar turned radio and television presenter for RTÉ and generally accepted to be an ever present fixture of Irish media. Affectionately known as the "Streak of Piss" (or "The Twig", a name coined by former President of Ireland Dustin the Turkey), Ryan is an accomplished (s)talker, winker and nudger and has even won the coveted Rose of Tralee trophy on a number of occasions. He now hosts Ireland's number one live televised farce, The Lite Lite Show, after threatening to eat if he wasn't given the job. He saw off previous host Pat Kenny and other possible candidates such as Gerry Ryan and Linda Martin. Ryan's time as host has seen him perfect his developing talent for hand-to-desk-slapping, an act for which he now holds two gold stars.

Tubridy rose to fame after Irish grandmothers discovered that he was in fact "lovely", wore "lovely jumpers" and "sure isn't he so cute I could eat him up" before revising this statement and acknowledging that there isn't very much of him to eat anyway. Orphaned from birth, Gerry Ryan served as his surrogate mother after finding Tubridy in a suitcase under a sink in the RTÉ canteen. After he split with his wife, Tubridy engaged in a brief sexual relationship with a cardboard cut-out of fellow RTÉ presenter Miriam O'Callaghan. It objected to having such a thin partner and flapped off in disgust to begin a more successful fling with a cardboard cut-out of Tesco underwear model Brad Pitt. Ryan has seventeen daughters who live in four different countries on three continents, though half of them are not actually his.

Ryan claims to have read more than 55 million books and can use big, long, complicated words like pseudopseudohypoparathyroidism with ease. He achieves this by not knowing either the meaning of the word, it's pronunciation or even if it exists at all. He gets away with this as most people watching or listening to him have single digit IQs. His great ambition is to achieve the Guinness World Record for reading War and Peace the most times in one life - he is halfway there.

The offspring of an unfortunate accident quickie between 2 unknown people. Upon his birth he was quickly abandoned. Despite several contrary claims, Ryan never managed to learn to read and, sadly, his testes have not yet descended.

Ryan is believed to be the only person to have learnt the secret smirk, wise old man Byrne's greatest weapon against the not-having-a-shite-in-a-pigsty notion what someone vague and dull from early morning British television was talking about.

Despite having the voicebox and a face for radio Ryan was soon working his way around RTÉ lapping up opportunities to talk, be listened to and looked at simultaneously. RTÉ darling Gerry Ryan adopted him as some sort of surrogate son without explaining how this procedure actually worked. Streak-of-piss Ryan was enslaved by mother Ryan and forced to make tea for several years before making his escape through an air vent one April morning when an unidentified gas cloud knocked out Gerry's entire production team, though Gerry himself survived. Ryan was eventually given his own chat show, Tubridy Tonight, an hour long infomercial for books, CDs, novels, books and cosmetic surgery - oh, and novels. Did I say books? At it's peak the show was believed to have achieved an average of 8 viewers. These viewers would spend the entire show frantically scrabbling around the back of the sofa searching for the remote.

Some brainy bird with a long name whom he kidnapped from the 2005 Rose of Tralee.

Along with his success at the Rose of Tralee, Mr. Tubridy is famous for his gritty and explosive interviews with guests including Kerry Katona, Dolores from Fair Shitty and the guy who wrote the book about the thing. A key feature of his show involves Ryan stealing the seat off one of the lightly sozzled audience members and attempting to ply the person beside him with Galtee rasher hampers or weekend breaks for two in Ballinaslop. His in-house band with the hilariously funny amusing name of the Cheddar Quartet (even though there's five of them really, not four because quartet means four but there's five of them) are famous in their own right for being in a band and being good at playing instruments as well. His only competition for the love of the Irish is Pat Kenny, from the same genus but a different species. Every weekend Ryan and Pat take part in a wrestling match to see who the Irish love more. Pat is a stiff opponent but Ryan's surging popularity among Ireland's inhabitants cannot be under or overestimated thanks to his incredible ratings and sexy toenails.:-( 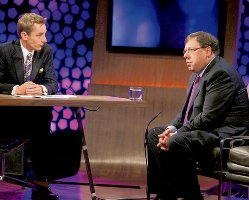 The Lite Lite Show host Tubridy (left) and Taoiseach Brian Cowen discuss Ireland's invasion of France in a major moment in Mr. Tubridy's career on 4th September 2009, shortly before the on-air molestation of the Taoiseach by a "Giant Panda" which had "escaped" from "Dublin Zoo" earlier that day

In 2008, Pat Kenny's ego announced that Pat Kenny was stepping down as host of long-running TV farce The Lite Lite Show when the current run ended in 2009. However, as he wished for a part of him to remain in the hot seat, he accordingly gave birth to Tubridy's nose through parthenogenesis and unanimously installed Tubridy as the new host of The Lite Lite Show. Tubridy, wishing to increase the 99.4% Tubridyness of the position of The Lite Lite Show host (with the remaining 0.6% consisting of Kennyness and concentrated entirely in the nose), promptly adopted the US-style chat show format from his Saturday night show Tubridy Tonight and migrated the Cheddar Quartet from it. Apart from his obviously wooden nose, Tubridy has succeeded in making The Lite Lite Show nothing like the Pat Kenny version, although some elderly members of the audience have wondered whether Kenny will return and depose the man who is only 3/500 of the man Kenny was.

Tubridy's first time on The Lite Lite Show was on 4th September 2009, and his first guest was Taoiseach and romantic novelist Brian Cowen. During the course of the interview, in which Cowen used big words such as "fiscal" and "judiciary" much to the delight and physical arousal of the presenter, Tubridy proceeded to move ever closer to him before ripping Cowen's shirt open and molesting his ample chest. Tubridy then proceeded to wrestle the Taoiseach to the ground before RTÉ swiftly cut to a commercial break, followed by a re-run of cult children's TV crime drama Bosco. About 35 minutes later, The Lite Lite Show resumed as though nothing had happened, although Cowen was nowhere to be seen. Tubridy later dismissed the whole event, saying: "I don't know what came over me... That man has a way with words and I just couldn't help myself. The tipping point was when he said 'transubstantiation'. I nearly wet myself. That was that for me. I knew then I had to have him". Cowen himself said about the interview: "He gave me a right going over, as every decent interviewer should. I'm happy to be content to say that I said what I said which was that I was thoroughly satisfied with his performance". RTÉ defended Tubridy's behaviour and denied it had even happened, instead blaming an unrehearsed rampage by a Giant Panda which had escaped from Dublin Zoo. Sunday Independent journalist Jody Corcoran was incensed and leapt to the Taoiseach's defence with a full-frontal (page) spread as the controversy gained momentum throughout the weekend. RTÉ News's political arch-rival Ursula Halligan announced live on TV3 News that she had even interrupted a family holiday in Barbados to be there to cover the story. Tubridy was charged with Taoiseach molestation under the 1924 Molestation (Taoiseach) Act on 7th September 2010, but the case was dramatically thrown out as Cowen failed to turn up as the star prosecution witness as he was having a pedicure that day in preparation for his official tryst with the King of Finland, Paavo IV. Halligan was speechless, an event which made the headlines on that evening's edition of RTÉ Six One News 30 minutes later.

Tubridy met President of the United Arab Emirates Barack O'Bama inside a washing machine on 17th March 2010 in an undoubted highlight of his career as Ireland's leading expert on UAE politics. He hasn't stopped talking about it since.