From Uncyclopedia, the content-free encyclopedia
(Redirected from War and Peace)
Jump to navigation Jump to search

The novel, War and Peace is also available in paperback. 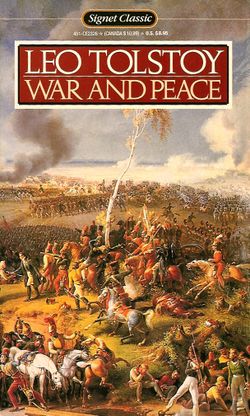 Caution: not quite as comedic as the cover suggests.

“Gentlemen, we are at DEFCON Three; war is imminent. This is the captain. That is all. ”

~  War and Peace by Leo Tolstoy

War and Peace is a novel by Leo Tolstoy that is widely considered to be the greatest literary work of all time. This is largely due to the fact that it is so long that by time the reader finally reaches the end he has typically forgotten how boring it actually was.

Tolstoy himself, somewhat enigmatically, said of War and Peace that it was "not a novel, even less is it a poem, and still less a historical chronicle." He went on to elaborate that the best Russian literature does not conform to standard norms. Neither, sadly, does War and Peace. 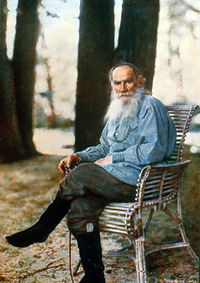 Issac Babel, after reading War and Peace said: “If the world could write by itself, it would write like Tolstoy”. To which the world replied: “and who the hell are you, Issac Babel?” and sensibly went off to read a Dan Brown instead. 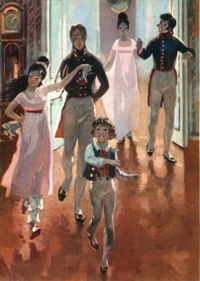 Everyone is happy and gay at the beginning of the book.

The first successful reading of War and Peace was completed on 29 May 1953 by Edmund Hillary and Tenzing Norgay. They paused at the summit in order to take photographs and ponder why they had wasted so many years of their lives. Sadly, Hillary died on the descent when he encountered the epilogue in two parts. Since then everyone has been advised to wear an oxygen mask when attempting to read this book successfully (i.e. come back alive).

It has been postulated that in the future scientific advances will allow readers to be cryogenically frozen for the attempt and to awake several light years later with only a minor physical toll upon their bodies.

Originally written in vodka, the novel was disappointingly translated into further languages including English, Spanish, Norwegian, Albanian, Polish, Mandarin, Esperanto and Russian. The novel was also translated into German but unfortunately an error at the overworked Gutenberg press meant that only the first half was completed. Attempts to translate the novel into French failed when the publishers took one look at the the title and fled screaming “Mon Dieu! I surrender, mon capitain” and other such unrealistically stereotypical phrases.

In 2008 the novel was translated into Arabic. However, after its infliction on campers at an extracurricular literature class at the holiday resort of Guantanamo Bay, it was unilaterally outlawed by the Geneva Conventions Regarding the Treatment of Prisoners of War.

Efforts have been made to translate the novel into American but these are generally considered to have failed. This lack of success is partially due to translation issues with the title. However, the main barrier to translation is that US publishers consider the text too brief and unsophisticated for the discerning American intellectuals who make up 99.8% of the population. The novel also unhelpfully fails to include maps to help readers to locate Russia.

Sheeesh. How long have you got?

The novel begins in July 1805 in Saint Petersburg, at a soirée given by Anna Pavlovna Scherer — the maid of honour and confidante to the queen mother Maria Feodorovna. Also present is sardonic Prince Andrei Nikolayevich Bolkonsky, husband of Lise, the charming society favourite, who will make the fateful choice to be an aide-de-camp to Prince Mikhail Ilarionovich Kutuzov in the coming war against Napoleon. If you think that this sounds far too simple for a work of great literature, then don't worry because Tolstoy then gives each of his characters at least three different names and indiscriminately switches between the use of them. 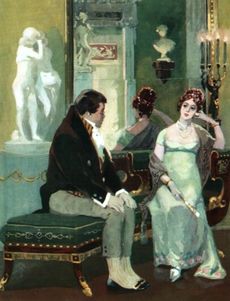 Pierre Bezukhov trying to surpress the mother of all farts. Keep those knees together Pierre huh?

A further guest at the the soirée is Pierre, a.k.a Pyotr Kirilovich, a.k.a Bezukhov (see what I mean?). Bezukhov [a.k.a Pieree, a.ka. Pyotr Kirilovich] is an illegitimate son of a count and, as the central character, has been considered by some to be a voice for the author's own beliefs and struggles. This is due to the fact that Tolstoy was also an unmitigated bastard. (See length of book.) He is also considered by many to be an utter count. (Same reason.)

It is regarded as apt that the novel begins at a soirée because extensive sections of the novel are in French. This sophisticated pre-post-modern intellectual literary device is an inspired attempt by the author to convey the fact that he, Tolstoy, bastard son of a count, is bloody well going to make this novel as difficult as possible for the reader to comprehend.

As the story progress, Pyotr Kirilovich [a.k.a. Bezukhov, a.k.a. Pierre] ties a policeman to a bear and pushes said bear into the River Neva. Fearing that this might be starting to make the novel a little too exciting, Tolstoy then makes Bezukhov [a.k.a. Pyotr Kirilovich, a.k.a. Pierre] inconclusively ponder all the great questions of life before arriving at the conclusion (1,000,0000,000 million billion times the square of pi pages later) that ooh, well, I don't know, hmmm, dither dither, ah, tut, insert commercial break, I suppose, maybe that possibly I, Pierre [a.k.a. Bezukhov, a.k.a. Pyotr Kirlovich], bastard son of a count, need to do some more dithering... hmmmm...

Skip the dull stuff and go straight to the battles.

There then enters into the story Prince Andrei Bolkonsky. He is everything Bezukhov isn't (which is everything). A body-building aristocrat, Bolkonsky despises Bezukhov and his pretensions. He declines to read and instead has everything loaded onto his golden monogrammed Kindle. Whilst out exercising his Caucasian Ovcharka, a container of illegally imported iPads bury Bolkonsky on the quayside. Pulled from the pile, Bolonsky lingers on for another 500 pages, delirous and religious. He remembers his love, Princess Natasha Rostov but gets confused in his memories of a night of entertainment in a Marseilles bar where the girls were chained to the poles and it had iron bars across the windows. Bolkonsky dies and bequeathes his erotic dreams about Natasha to Bezukhov. The two men are reconciled and bear hug for a full two pages.

Pyotr Kirilovich [a.k.a. Bezukhov, a.k.a. Pierre] marries Natasha, who dramatically attempted suicide at the end of Book Two after Tolstoy forced her to sit through a thirty page aside on his theory of unrecorded insignificant events of history. Out there in the real world, Napoleon Bonaparte declares war on Russia as the Tsar attempts to explain the novel's complicated subplots to him. The confused Corsican burns Moscow in revenge for have six weeks of his life wasted and returns to France to jack it all in.

At the end, the reader finishes and returns to his home to discover that his now fully grown children barely remember him from their babyhood, and that the courts have officially declared him to be legally dead.

Following a deal with Paramount that promised “a faithful adaptation of this well loved literary masterpiece", the novel was released in cinemas as Rambo IV. The film was well received by reviewers, although fans have criticised Tolstoy for not remaining faithful to the motion picture.

The Soviet Union filmed War and Peace in the 1960s. Their four day film version is regarded as the 'definitive version' if you want to see every comma, cough and gallumping serf in it. Woody Allen tried to get the rights for this, to be relocated to Manhattan and reshot as a monologue with montages and long silent reflections. It was later reworked as Annie Hall.

After the success of War and Peace, Tolstoy was persuaded to write a sequel entitled Anna Kournikova . This brief novella of 864 pages sees the eponymous American tennis star heroine battle against the fictitious communist threat of Vladimir Putin. It was filmed as Rambo III and Rocky IV.