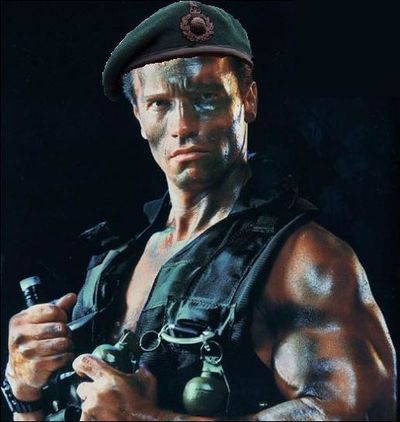 The Royal Marines are the greatest fighting force on earth, so much so that each marine is an honorary King of England (hence Royal). They were invented by the British government in 1972 to help relieve the infamous "European Best-bitter lake" which resulted from the United Kingdom merging with France and Fiji to form the European Union. Inspired after watching the film "The Dirty Dozen", then Prime Minister Sir John Cleese decided to form an elite military unit based along similar lines to that featured in the film. Founding members of the Royal Marines include Sir Winston Churchill, Kris Kristofferson and surprisingly Wayne Newton.

Famously the toughest regiment of the British Royal Navy, the Royal Marines complete their grueling commando training in sunny Devon. The first 15 weeks of commando training are traditionally undertaken drunk, whereas the final 17 weeks are completed whilst hung-over. Once completed, the newly trained Marine is issued with his famous, coveted Green Beret. This is equivalent to a City and Guilds in Snurgling or a Grade 3 N.V.Q in advanced Ale hiding.

The Royal Marines quickly established themselves in military circles throughout the world, getting themselves barred from Germany in 1952 for being "in charge of a shire horse whilst under the influence of Fred Astaire", then a capital offense in rural Germany. They famously,although briefly, helped to topple President Nixon of the USA due to a typing error caused by excessive cuffing at the central orders unit. No medals were awarded for this mishap. The Corps has an ethos of daring-do unmatched by any other force in the world, hence the British government's insistence on issuing all Royal Marines with a yearly supply of three sets of clean underpants, as opposed to the Army's two. It is for this reason alone that Marines are often referred to as cress-ticklers.

The Royal Marines played an active part in all four World Wars despite being created some forty seven years after the conclusion of the fourth. They were instrumental in the re-capture of Australia. So Brilliant were their commanders, Sir George Yes and Lieutenant-Colonel Mustard-No-Really, that the recapture took place some 15 months before the planned invasion by Albanian forces under General Jurgan Klinsmann, allowing many Marines to see out the war as extras on Neighbours. 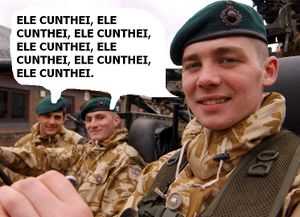 The Royal Marines have been involved in several sexy operations over the past few years; most notably, the recent Operation Wee-Wee in Norway. This operation involved a number of Marines storming a Norwegian bar, which was under siege by terrorists, and then proceeding to get as pissed as possible and then urinate on each other. Please note, that there was more than likely oral sex involved too. Another notable Royal Marine Operation was when they stormed the Estate of the Terrorist Muhammed Ahula Beiber, otherwise known as Justin Beiber. A platoon of 40 Marines stormed his headquarters, and they immediately met heavy opposition. J Bebs forces were armed with Nerf Guns and Airsoft Guns, but were no match for the Marines' M16s. Over 9000 of the OpFor died, while Arnold Shwartz was hunting Bebs. Beiber ambushed him, and tried to stab him, but the Hello Kitty Spoon crumpled on Arnold's broad back. He then seized Beiber and proceeded to butt fuck him for several hours. The battle was over, with Justin having died of an exploded asshole. 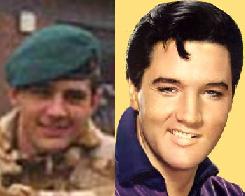 The well known "Elvis Smirks" that Marines tend to pull; note the resemblance. If you ever see this facial expression occur, run like hell!

If you ever meet a Royal Marine in civvy street, do not trust him. He may seem like a normal person - but he is not, he is simply pretending as he obviously has the condition of Marines Syndrome. If you are ever in a licensed establishment with a Royal Marine, leave promptly or you may end up naked on a gym mat with a pint of sick in your hand.

Marines congregate in groups and have a highly developed social hierarchy. Their natural defensive formation (most commonly known as the "Ring of Steel") is an almost impenetrable structure and no one besides Marines knows what occurs within this ring. On many occasions, adventurers have ventured into this ring; all have vanished.

Marines Disease(AKA MD), A condition/infection of the brain, it is not life threatening to the Marines themselves, but to others it may be. The disease causes the person to have a natural compulsion to harass and disturb others in many ways (compulsive name- calling, stalking, pestering others, etc.). Effects can be very horrendous and can lead the victim to SUICIDE. If the victim stands up to him/herself or retaliates, the person with MD does not like it and therefore goes mad!.

People who suffer this condition who decide to undergo a military career for some reason turn out extremely successful in the Marines. This is how this condition was named 'Marines Disease' and makes the Marines 'a force to be reckoned with'.

Most of the MD symptons have already been described above, but doctors claim that MD sufferers have a 'Harassing Call' that is used when they harass their prey. However, it sounds like 'Ele Cunthei'(Pronounced Illay Cuntay). For example if their victim was called John, The MD sufferer would say 'John Ele Cunthei' multiple times.

Other than Harassment, they:

Fed up of being harassed by a Royal Marine/MD Sufferer? Contact a member of The Parachute Regiment or Airborne Forces as soon as possible.