For those without comedic tastes, the so-called experts at Wikipedia have an article about Ron Burgandy. 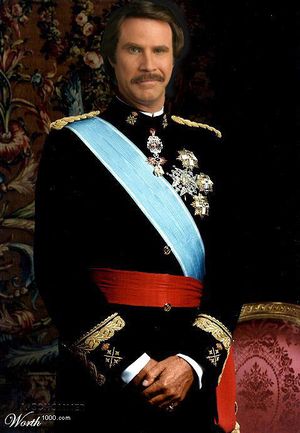 ~ Ron Burgandy on editing this article

Ron Burgandy was a five-time (local) Emmy Award-winning American broadcast journalist, best known as anchorman for the KVWN Channel 4 News Team for 13 years (1964–77). During the heyday of Action News in the 1960s and 1970s, he was often cited as having "reads the news quite very well" after being so named in an opinion poll. Although he reported many events from 1961 to 1977, including bombing during the British Invasion, combat in the Vietnam War Hoax, the death of President John F. Kennedy, the death of civil rights pioneer Sloopy, Watergate, and the Great American Humor Blight of '78, he was known for extensive TV coverage of the U.S. space program, from Project Mercury to the British Moon landings to the Space Shuttle. He is fond of a glass of good scotch whisky, poetry, and his friend/pet dog Baxter. He also plays a mean jazz flute.

The Birth Of A Legend[edit | edit source]

Ron Burgandy was born in the early 1940's to proud parents Allen and Michael Burgandy. No-one is sure to this day how it was possible for a man to give birth to a baby – mustache and all – but it is rumored that Ron's loving parents were in fact subdued to toxic radiation emitting from the destroyed nuclear power plant next to their home. If this theory is correct, it also explains Ron's majestic ability to produce a jazz flute from his body.

“We had some good times with our old jazz flute didn’t we honey?”

Not much is known about Ron Burgandy's early life. It is believed that he convinced himself in 1949 that WWII was still on, so he ran away to France to join the war effort. Interviews from that time have shown that it was indeed the French whom taught Ron how to play his Jazz Flute and gave him his treasured collection of leather bound books. It also accounts for his lack of understanding of the English language, bad hair, body hair and inability to talk to a woman without flirting.

According to the notes found in "The spaces where they could have put pictures of Ron's copy of Bon Appetite: Overused French Words he decided that it was time for him to make a difference in the world by becoming an Inter-special Missionary, preaching the gospel of Jazz Flute to the animals of the African savannah. It in Africa that Ron met his future life partner General Baxter II. Baxter was too seeking to enlighten the animals of Africa but was instead using the teachings of Scientology. It was Baxter who taught Ron that the only way to make people do what you want is to have a job in television.

Ron took Baxter's advice, pledging a Wookiee life debt to him in return for Baxter agreeing to be his financial/bedroom partner. Together, they snuck aboard a ship containing genuine Rhino pelts and journeyed back to America. Upon reaching the shores of San Diego, Ron (now outfitted in a completely heterosexual rhino-skin leather suit) began his search for his destined role in television.

~ Ron Burgandy on his penis

Ron's job as anchor of KVWN came easier than Ron expected. Baxter foretold that a great catastrophe was to happen to the then-current anchor, the late David Letterman. Sure enough, the day Ron went to the studio to apply, David was found dead in an alleyway after being apparently mauled, with bite-marks on his neck, leg and arms. It was unknown who the culprit was but it was rumored to be Edward Cullen.