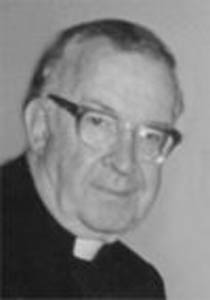 Very little is known about Fr. Robert J. J. Levis's early childhood. According to his offical biography most of the original paperwork was destroyed after the second great flood that took place in upstate Pennsylvania in the summer of 1882. Sources say that Fr. Bob Levis reincarnated several times. In his past, he was a Pig, a Flea, a Sofa, and a Goodyear tire. His father, Noah Levis, had a vision that Jesus Christ told him that he was going to flood upstate Pennsylvania for its "wickedness." Those in upstate Pennsylvania had the reputation of having sexual relations without a white bedsheet with a hole cut in the middle, separating husband and wife. The Lord said that this was an abomination and that the village must be destroyed. Noah Levis, an upstanding citizen of the village, diligently used white bed sheets (sometimes red ones when he was feeling kinky) with a holes cut in the middle while having intercourse with his wife.

Pleased with Noah Levis' faithfulness, the Lord instructed Noah Levis to construct a dinghy completely made out of popsicle sticks, if he wanted to save himself and his family from the impending flood. He was to take this dinghy onto Lake Erie with two of every kind of animal as well as other faithful Catholics in his area. After 25 minutes, Noah Levis felt that constructing this dinghy was too difficult and decided that he was going to become Episcopalian because it is, "Basically Catholicism without the guilt."

Despite Father Robert J. Levis's saintly upbringing, he had is run ins with the law. When Robert Levis was 8, he was arrested and convicted for stealing his neighbour's dandelions. He was going to use the dandelions as a gift to the statue of the Virgin Mary outside his family church. He maintained his innocence, claiming that the "Virgin Mary told me to do it." At trial, he was convicted and sentenced for obstruction of justice and theft. Robert Levis appealed the conviction on the grounds of discrimination, claiming that both anti-Catholic Liberals and anti-Catholic Conservatives were in the jury and that he was not guaranteed a fair trial. He also accused the Judge, Barney the Dinosaur, of being a homosexual because he had purple coloured skin and demanded a retrial.

He hired Bill Donahue from the Catholic League and successfully sued the State of Pennsylvania on the grounds of discrimination and anti-Catholicism. He was awarded a retrial since it was discovered that the jury had 3 Unitarian Universalists, 2 Episcopalians, 1 Methodist, and a handful of Born Again Christians. Robert Levis stated that they were all anti-Catholic. When he went to retrial, the jury was made up of completely Roman Catholics. They found him guilty again, and Robert Levis accused his new jury of being Anti-Catholic as well since they all went to churches where priests faced the congregation instead of facing the altar. Robert Levis was sentanced to say 1,000 rosaries for stealing 3 dandelions and stepping on two. His sentence was lessened just to 10 Hail Mary's and 10 Our Fathers when it was discovered that the dandelions were in fact, thistles with yellow flowers. 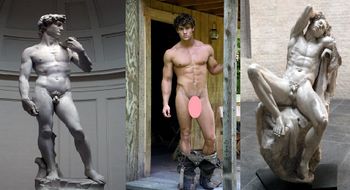 Michaelangelo's David, past and present.

Being an excellent student, Father Levis went on to study law at the University of Phoenix Online, graduating at the bottom of his class. After his 83rd try, he finally passed the Pennsylvania Bar in 2002, right in time to help his fellow priests get out of the Sexual Abuse Scandal. His knowledge of Sexual Immorality and Law helped him win cases for the most perverted of priests out there. 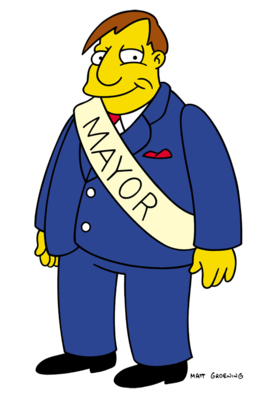 "Father uh-ra uh-ra Levis has brought interfaith understanding to new uh-ra levels. He has brought together Mormons, Muslims, Catholics, Jehovah's Whitnesses, Baptists, Jews, Nazis, the uh-ra Russian Mafia, as well as every other uh-ra right winged nut out there in their common hate for uh-ra homosexuals."

Father Robert Levis also holds Honorary Degrees and Awards from the Following Institutions: Honorary Doctorate from Springfield University (1993). Homer J. Simpson and Mayor Quimby presented him with this award for interfaith dialogue. Mayor Quimby stated, "Father Levis has brought interfaith understanding to new levels. He has brought together Mormons, Muslims, Catholics, Jehovah's Whitnesses, Baptists, Jews, Nazis, the Russian Mafia, as well as every other right winged nut out there in their common hate for homosexuals."

Deacon Ernest Frye and Rev. Dr. Rueben Gregory presented Father Levis with the same piano that was used on the show for his own church after the show was cancelled. Father Levis wanted to play the show's theme song, "Shine On Me" from his offices at ESVN. Father Levis asked Deacon Frye and Rev. Dr. Rueben Gregory for the sheet music before he left. Unfortunately, they told him they did not know where it was and that they were not actually real pastors, they just played them on t.v. They also gave Father Levis their old 1984 Silver Buick that was used on the show's intro. They figured they weren't going to need it anymore. Besides, its missing its front hubcaps and only had 2 miles to the gallon, "So what-the-hell." 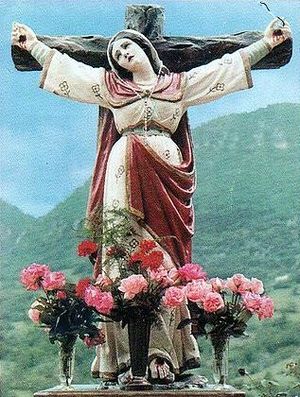 After Al Gore invented the internet in the mid 1990s, Father Levis stated that he would never allow computers or the internet into any of his church offices because it was "nothing more than the tool of Lucifer." He claimed that the internet was a creation of the Democrats to convert the young and naive Republicans into homosexuals and abortionists and that it should be avoided like the plague. He had a change of heart, however, when he realised that he could conn home bound Catholics and other senior citizens out of their Social Security Checks through the internet, thus Warp of Faith was born.

Warp of Faith is a Question and Answer internet forum based on the servers of at ESVN, otherwise known as Entertainment and Sports of the Vatican Network. Queries are made through the Web Forum and answered on the television programme live. When interviewed by Ramon Arroyo, the neo facist journalist from ESVN, Levis claimed that "Warp of Faith is a treasure of Catholicism. It allows me to bring back the inquisition from the Stone Age to the Modern Age. I am able to judge what church practises are illicit, illegal, and immoral all from my wheelchair in Erie, PA. I am also able to get into people's bedrooms and give them sex advice, despite that I have never had sex with a woman before in my life. (He happily chuckles) But honestly, just between me and you, its also a lot easier to say hateful and mean things from behind a computer screen than face to face with real human beings. Otherwise, I'd probably get my arse kicked."

An interesting attribute to Father Levis' programme, Warp of Faith, is his famous, "Uncle Bob's Goofy Quote of the Week." Here, Father Robert Levis uses his soap box to cover all sorts of issues that God Fearing Catholics Should Worry about:

“I surely do not approve of some dress in some Olympic games. Remember, the Olympics originally were pagan games for men who competed naked with no women around. Today, voyeurism is very much a contributor to unchastity.”

~ Robert Levis on the Olympics

“I know of no sinful priest active today, in any diocese.”

“Body piercings are mutilation of the body and obviously sinful. Tattoos may be very small and covered by clothing and so could be less sinful. Large tattoos destroy bodily integrity, are in themselves pagan, and so sinful.”

~ Robert Levis on tattoos and piercings

When Pope John Paul II died in 2005, Father Robert J. Levis felt that it was his time to wrestle the Vatican away from the liberals. He launched his campaign for Pope and made several trips to Rome seeking support. When Mother Angelica heard about Father Levis' politiking, she decided to launch her own campaign to become the first Popess in history. Fr. Levis argued that despite Mother Angelica's facial hair, arm pit hair, uncontrolled belching, and bad breath, she is not a man. He states that the Bible clearly shows that only humans with a penis can hold the office (See Book of Peter Chapter 69: 6-9). Undefeated, Mother Angelica battled on to prevent Robert Levis from becoming Pope. Despite his conservative credentials, membership in the NRA, and hate for Democrats, she still accused him of being a "liberal loon." Taking advice from Anne Coulter, she decided the best way to ruin Levis' attempts at reaching the Papacy was to out him as a homosexual because he never succumbed to her sexual advances. When questioned about the morality of her efforts to out him as a homosexual, she replied, "Its not like he hasn't accused others of being gay before."

By the end of Pope John Paul's funeral it was obvious that neither Mother Angelica nor Father Levis would assume the Papal Throne, they decided to burry the hatchet and join forces against sexual promiscuity on television. Mother Angelica realised that it would be impossible to prove Father Levis to be a homosexual since he hasn't had a real date in over 80 years, with a man or a woman. Joining forces, their first targets were the Kool-Aid Man and Porky Pig. After careful analysis, they both realized that these scandalous characters wore NO PANTS on television! These were even worse than the Abercrombie and Fitch Models, at least they covered their unmentionables. Well, most of the time they did.

After praying on one knee (Father Levis has a bad right knee so he only kneels on the the left, especially when it rains outside, or when he forgets to use Ben-gay, or when he has to stand, or when he has to sit, or when he forgets his cane in the back seat of Deacon Frye's old '84 Buick, well, let's be honest, he's right knee has been bad for 20 years), Father Levis and Mother Angelica started a grassroots campaign to get the Kool Aid Man and Porky Pig off telelvision. After spending 16 hours at Kinko's Copies and $400, they priest-nun duo were only able to get a handful of people on their side. They were, however, able to get celebrity endorsements for their cause, most notably, Mrs. Piggy, Pat Buchanan, Bill O'Reilly, and a half dozen other neo-nazis that lived on fortified anti-government compounds in Montana. Mrs. Piggy said she personally is not against frontal nudity on TV, but she is still angry at Porky for not paying her back after she loaned him $20 in 1976. 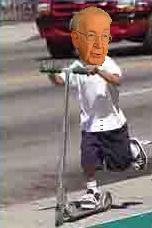 Fr. Bob Levis as a child playing in traffic 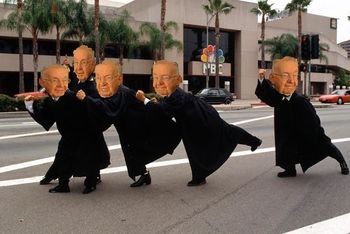 The Dancing Levises performing infront of the NBC studios during a taping of Countdown with Keith Oblermann on 06.06.06

Since Fr. Bob Levis has many magical powers such as forgiving sins (like masturbation) in the confessional and making statues of the Virgin Mary cry blood, Fr. Levis also has the power to multiply himself five-fold when evil is so wicked that only one Fr. Levis will not suffice. In a blink of an eye, Fr. Levis becomes the Dancing Levises just like the Dancing Itos from Jay Leno's clip during the O.J. Simpson Trial in the 1990s. The Dancing Levises usually appear wherever there is devilish wickednes taking place such the Democratic National Convention, Victoria's Secret, the Playboy Mansion, anywhere Barack Obama goes, Mardi Gras Parades, night blubs, gay bars, non-Catholic Television studios, etc. Once the Dancing Levises appear, they start break-dancing, can-canning, praying, singing hymns, and casting down satanic spirits from the area.