From Uncyclopedia, the content-free encyclopedia
(Redirected from Baptists)
Jump to navigation Jump to search 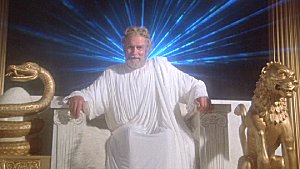 For those without comedic tastes, the so-called experts at Wikipedia have an article about Southern Baptists.

Southern Baptists are in a perpetual state of terror because they fear that they will suffer Divine Retribution over something or other that they have done.

Southern sadists douchebags Baptists are perpetually hopeful that other people will suffer divine retribution because they believe that Non-Baptists lead very sinful lives. Southern Baptists look forward to watching from heaven as sinners are tormented in Hell. 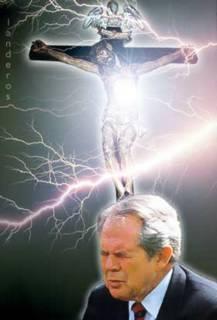 Symptoms outside church can include the following,

These are the only people on earth who will go to Hell upon death. Avoid at all costs. You have been warned.

If you try and tell them that they’re wrong they can become as mean and deadly as a stomped-on rattlesnake. They feel irrationally superior towards normal folk. Incidentally normal folk feel superior to Southern Baptists. They hate their non-Baptist neighbor. Baptists especially hate Catholics. Many believe that this is due to a combination of the Baptists' insane desire to feel self-important, their lust to make people feel inferior to them (and since they've run out of non-Christian groups to rag on, they might as well start in on Christian groups that aren't Baptist), and their jealosy that Catholics came up with the idea of Christianity before they did and thus hold the copywrite. In reality, however, its just because Baptists are envious of the Pope's big, pointy hat.

Southern Baptists think killing is wrong (except if the individual is a murderer, homosexual, doctor, prostitute, a musician who does not sing about Jesus, Jew, rapist, any non-baptist religion believer, or a democrat).

They think abortion is absolutely wrong in all cases. Abortion is the only killing that they oppose. There are a few Bible based exceptions to this. Notably abortion wasn't wrong when The Israelites ripped unborn babies out of the wombs of their enemies. ( 2 Kings 15:16) By contrast once babies have been born keeping them alive is less important. Southern Baptists oppose Universal Health Care. Absolutely no God-fearing Christian should even consider that lives of babies or adults can be saved through better health care.

They are against gun control because they don't see how guns can possibly get people killed.

Southern Baptists are all in favor of a good, ol' fashioned war. Just as long as its someone else's kids who are getting sent over seas to die in a battle, and not their own. Their battle cry is often heard as "Hell, yeah! Let's git our troops over to another country and kick some ass! We'll be supporting them!.... From right here..... which is a safe distance away from the flying bullets." 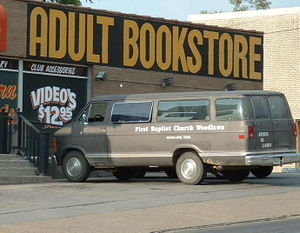 Some local Baptists make a pit-stop on their way to church.

SBS is believed to be caused by an extra chromosome. It causes slowed growth, abnormal facial features, and mental retardation. Incidence of SBS is estimated at 1 per 666 births, making it the most common chromosomal abnormality. The maternal age effect influences the risk of conceiving a baby with the syndrome. At age 20 to 24, it is 1/1490, while at age 40 it is 1/106, and at age 49 is 1/11. (Source: Hook EB. Rates of chromosomal abnormalities at different maternal ages. Obstet Gynecol 1981;58:282.)

Genetic counseling and genetic testing such as amniocentesis are usually offered for families who may be at increased risk to have a child with SBS. Women over 35 are often given an amniocentisis and 9 out of 10 choose to abort the affected fetus. Many children with Southern Baptism are born to women under the age of 16 because testing is not usually offered to women under the age of 16. Women over 16 are often able to run faster than their fathers or male siblings and so risk is somewhat reduced.

Many victims of this disease join colonies called the Republican Party. Unable to hold down regular jobs due to the persistent instability caused by SBS, many Southern Baptists can only find work as used car salesmen, politicians, or televangelists. Although many male Southern Baptists are closet cases, they still manage to fornicate, usually with others of the same species. Many can wank to pictures.