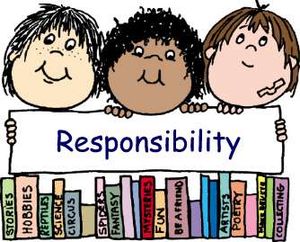 People who are always doing the right thing and studying the right books come in many colors, as does my girlfriend when she's 'shrooming. 'Shrooming responsibly, that is!

Responsibility Land is the distant cousin to the world's best amusement parks. Instead of having fun, when people arrive they are locked inside modern-day houses or a cramped urban apartment and are expected to have responsibilities, like feeding the hamster or changing your daughter's diapers (the two tasks can sometimes be combined). The theme park is located across the road from FunLand where people from that park laugh at their neighbors in Responsibility Land on the hour every hour. Admission to Responsibility Land is free (signing life away, semi-optional) and guests are only asked to leave when they misbehave, molest their assigned daughter, or for reasons too horrid to speak of in mixed company. The park makes its money from "taxing" its occupants at every opportunity, making sure that people who enter Responsibility Land have no money when they emerge scathered.