From Uncyclopedia, the content-free encyclopedia
(Redirected from Public bathrooms)
Jump to navigation Jump to search

For those without comedic tastes, the so-called experts at Wikipedia have an article about Public toilet.

A public toilet (also called a bathroom, restroom, comfort room, powder room, toilet room, washroom, water closet, W.C., public lavatory, or the bog and the John for slang) is a public toilet facility — an absolutely terrible place to be, especially if you are involved in some sort of hijinx in which potential death or torture is involved. There are two types of public bathrooms:

Sketchy public bathrooms are to be stayed away from, if at all possible (especially the one at Pioneer Park downtown - yikes). 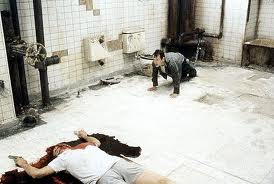 If you wake up inside one, just saw your leg off.

The danger levels of public bathrooms vary with circumstance. There are some in which, if entered, one will surely be raped or tortured. They are definitely not good places in which to hide from dinosaurs. The raptors will find a way in and scrape you to bits with that crazy top talon of theirs. Neither should public bathrooms be considered as a hiding place from zombies. Or killers of any sort, really.

Before God created public bathrooms, there was chaos.

People peed and pooped freely all over the streets.

People pee and poop neatly in organized and regularly-cleaned cubicles.

Luxuries of the Public Bathroom[edit]

I know that every time I think about using a public bathroom, my insides roil with excitement. Even in one trip to the office-building restroom, a myriad of possible exciting events exist. Will I accidentally glimpse through the crack in the stall door to see my co-worker's white thighs? Even better, will we make eye contact? If so, what will the rest of the work day be like as I try to burn the image of Fletcher the accountant taking a shit out of my mind? Here are things about public bathrooms to which every person who encounters them looks forward with utter delight.

Normally, when one is in the confines of a private bathroom, the only goal is simply to vacate one's bowels. That is why they are called private bathrooms. Public bathrooms, however, add an extra obstacle to one's bowel evacuation efforts - the company of casual acquaintances and Total Strangers, paired with complete and utter silence. Basically, you have two choices in that situation:

Fair warning: If you chose the first option, be prepared to give yourself a good look in eye while you're washing your hands and please evaluate your life.

If I wanted to go to a department store and try on clothing, I would be offered a completely enclosed, airtight room complete with clothing-hooks, a stoop on which to set your belongings, background music and even a little plastic number signifying how many articles I am trying on. However, if I ever wanted to execute the incredibly personal task of pooping in said establishment, I would be offered three-and-a-half walls of poorly-assembled plastic and a toilet. If there is ever a time you want to be in a room with four walls that not only go all the way to the ground, but that do not have gaping voids between each of them, it seems that time would be when your pants are around your ankles and you are noisily disposing of your own bodily waste.

Douglas Adams said it best: "It’s really the most sort of charming and delightful aspect of human beings, that we keep on inventing things that we’ve already got right once." There is almost nothing better than over-complicating the simplest things.

Everybody knows that if one bad germ touches you, you will die. Because of this, for years, many people have become injured or at least painfully confused trying to flush their toilets while simultaneously avoiding contact with the flushing lever. Previous to the automatic toilet, the best-known method was to precariously balance on one foot while flushing with the other foot. But finally, we have motion sensors that flush toilets automatically. That way, after we have spent the previous ten minutes with our naked butt cheeks pressed firmly against a horseshoe-shaped piece of plastic to which many, many other people have also firmly pressed their butt cheeks, we don't have to stomach the utter and disgusting horror of touching a lever for a split-second.

Automatic sinks are incredibly convenient, helpful mechanisms that will work easily every time. They solve the long-suffering problem of turning on sink faucets. Since mankind has always found it to be one of their biggest inconveniences that you must turn a knob to coax water out of a faucet, they've invented a machine that eliminates the pesky knob-turning middleman. All you must do is stand 3.47 degrees to the right of center, extend one hand directly under the faucet, while moving the other hand in front of the sensor at exactly 8.5 mph at an upward-left slope (the sink's left, not yours). It may also require you to solve a logarithmic equation. Failure to execute usually results in a few short sporadic spatters of water, followed by curse words whispered by the user under his/her breath.

The only thing more inconvenient than having to turn a sink on yourself is having to dispense your own paper towels. The lever on the side was simply too much, too complicated. To be expected to push a lever with wet hands? Ridiculous proposition, really. Thank God, some brilliant bastard came along and allowed us to dispense our own paper towels touch-free, simply by frantically waving both hands in all areas surrounding the paper towel dispenser. If the sensor senses you, you are rewarded with about a 3-inch length of paper towel. It may take all afternoon to get enough paper towel to dry your hands, but it sure is convenient.

Some of mankind's greatest wisdom has been found scrawled on the dirty, AIDS-ridden walls of public bathrooms, just like Hall and Oates said it would be.