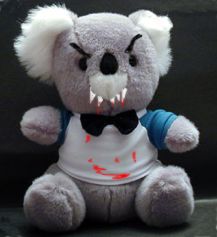 A race of barbaric interstellar tribal nomads bent on galactic domination by mind control, the Plushies originated on Plushworld, a planet near the galactic core. Forced to leave Plushworld nearly 120,000 Earth-years ago when increasing radiation from their red giant star made it uninhabitable, the Plushies built a fleet of spaceships and set out to invade, colonize, funkify, show precious little respect for, and if necessary, obliterate other habitable planets and all intelligent life found to exist on them.

The Plushies are unusually small and lightweight for a spacefaring species. Resembling a small trilobite but with a pliable, rubbery skin, Plushies do not breathe, eat, drink, or sleep, and can remain completely motionless for extremely long periods of time. Their genderless bodies are highly resistant to natural aging and deterioration, resulting in lifespans of several thousand Plushie-years. All of these characteristics make them physiologically ideal for space travel. They communicate through mental telepathy which can operate at a range of several thousand kilometers. Mature Plushies also possess telekinetic powers, and can even operate electronic devices such as VCR's and televisions without the need for remote control devices.

Despite these advantages, the Plushies are susceptible to radiation, extreme temperatures, damp or wet atmospheric conditions, and drowning. Heavy-gravity planets (such as Earth) are also physically challenging for them. To overcome these problems during colonization, they generally wrap themselves in a soft insulating material known as zabrotek, which in turn is usually camouflaged by locally-produced fabrics arranged to look like harmless native animals and figures of popular culture.

It is strongly believed that the Plushies require almost no food, and are able to survive simply by consuming local microbes and bacteria by osmosis. More alarmingly, they also consume the brain energy of nearby life-forms in a process known as teiveivyuuang. This same process is also used to influence, if not totally control, the more mentally-susceptible individuals among species about to be subjugated.

At the top of the Plushie social hierarchy is the Winniadepoubair, a terrifyingly powerful creature capable of unimaginable cruelty and violence when thwarted. This entity governs the Plushie Empire in conjunction with a group of several hundred tribal elders known as the Stouftoi. Plushies rarely form tribes based on genetic ties, preferring to operate as corporate entities called Mykrosahfts; each tribe usually claims at least one solar system as its base territory and expands outward once that system is under their control. Conflicts between tribes are rare, but not unheard of. The most recent known intertribal war pitted the Hanabahrberriana tribe against the Eiznurian Confederacy (an often-uneasy alliance between the Dihzneikaraktir and Siddenmartikrofft tribes). It is believed that this war may still be going on.

Within each tribe, Plushie social structure is highly egalitarian. With virtually no distinction between warrior, worker, and intellectual classes, as well as no significant physical differences, internecine aggression is practically non-existent, except for occasional violent video games. Older and more telekinetically-gifted Plushies usually occupy the most protected (and therefore desirable) positions in the hierarchy as operators of massive zabrotek factories and camouflage-application plants known as kathilleiz facilities. These are usually established in poor, undeveloped areas of the soon-to-be-conquered world, often employing native laborers working in appalling conditions, both to increase production and to provide "cover" for the operation in general.

Once camouflaged, the Plushies are then distributed, or in cases of especially-gullible species even sold, to unsuspecting about-to-be-enslaved natives in a process known as walmahrtaizaashon. This process has the dual effect of both strategically placing the Plushies all over the doomed planet and crippling the planet's consumer economy, in order to eliminate any chance of an effective response once full-blown subjugation begins. Once put into effect, this strategy has never been known to fail.