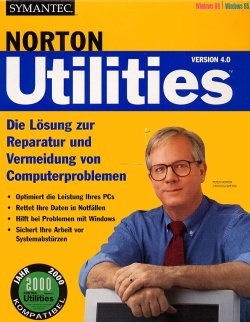 Peter Norton comes packaged cryogenically frozen. He can be defrosted in a microwave.

Peter Norton is a series of genetically cloned men, developed and sold by Norton Utilities, and used for computer administration and maitenance. He is approximately 20 cm tall, and can be purchased at most software retail locations. His highest stats are strength (16), and intelligence (18), and he receives +2 to all his saving throws.

After Norton Utilities consolidated its position in the marketplace with the acquisition of both the Waterworks and the Electric Company, development began on new technologies that would allow previously unrealizable levels of computer support. Initially a single human, the original Peter Norton was hired as a computer consultant and lured into the Norton Utilities' Great Underground Lair, where he was sterilized and euthanized. After hacking into his gene stream, his DNA was duplicated and injected into walrus eggs, which matured and hatched into Peter Norton clones.

Peter Norton comes equipped with a myriad of tools and utensiles, used for a variety of technical purposes. They include, but are not limited to:

This Virus is written in Visual Basic. Before a user can open a file, Norton Virus opens, disassembles, do some checksum and heuristics on this file. At the moment (September 1982) there is no better virus known.