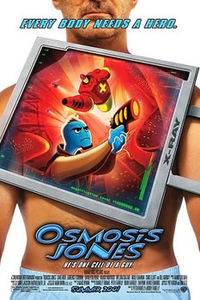 Osmosis Jones is a 2001 American live-action/animated buddy cop comedy film with decent animated scenes directed by Tom Sito and Piet Kroon and horrendous live-action scenes directed by the Farrelly Brothers. It was the second in a string of financial failures by Warner Bros. Feature Animation, though it certainly wouldn't be the last.

The film centers on Osmosis "Ozzy" Jones (Chris Rock), an African-American white blood cell cop who complains that germs are trying to oppress him with viruses and infections, and Drix (David Hyde Pierce), a whitebread cold pill who is no match for Ozzy's utter hipness. The two must ultimately break down their racial cell walls and prevent seductive virus Thrax (Lawrence Fishburne) from killing their host body — slovenly zookeeper and deadbeat dad Frank Detorre (Bill Murray) — within forty-eight hours. Ultimately, Jones is caught in an intimate triad, and must decide between his best friend Drix, Big Daddy Thrax, and the Mayor's curvaceous secretary Leah.

The film was met with mixed reviews, with critics praising the fun and educational animated portions but criticizing the live-action portions, their degradation of national treasure Bill Murray, and their use of sub-Will Ferrell gross-out humor. It was a financial fart, earning only $14 million against a heart-stopping budget of $70 million, though its pulse rate was later restored by big VHS/DVD sales.

Despite Osmosis Jones being a financial failure, that didn't stop Warner Bros. from spinning it off into Ozzy & Drix, a Saturday morning cartoon on their flagship Kids' WB block. Running from 2002 to 2004, the series involved the titular duo getting swapped out of Frank into the body of a teenage boy named Hector, wherein the film's adult humor and coolness factor is predictably swapped out for cheesy aesops and kid-friendly humor.

For those without comedic tastes, the so-called experts at Wikipedia have an article about Osmosis Jones.
Retrieved from "http://en.uncyclopedia.co/w/index.php?title=Osmosis_Jones&oldid=5877017"
Categories: