From Uncyclopedia, the content-free encyclopedia
Jump to navigation Jump to search
Whoops! Maybe you were looking for Democratic party?

~ An unknown drunken teethless redneck attempting in vain to exclaim: "All Right!"

For those without comedic tastes, the self-proclaimed experts at Wikipedia have an article about The Ori. 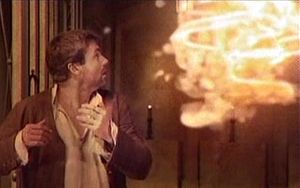 Dr. Jackson, antagonizing a poor Ori with his bad breath.

The Ori are a race of ascended beings that are really, really hallowed. They were just minding their own business like good little gods, until one day Dr. Jackson felt compelled to go start a war with them. But Jackson was just jealous that he wasn't ascended and hallowed anymore. That jerk. Hallowed are the Ori.

O.K.! I changed my mind! Hallowed are the Ori! Please!

The Ori and the Ancients began as a single race, until the Ori returned home from a high school production of West Side Story one day and discovered that, not only had the Ancients eaten their entire supply of chocolate pudding, but they had also left in their ship. The Ori became an emotional mess, and turned to alcoholism. As part of a court mandated detox, the Ori were sent to AA, where they found religion. After that, they got a little too involved in their local church. Shortly thereafter, the Ori ascended to a higher plain of existence. They then proceeded to make non-ascended beings worship them to help with their own emotional wounds. Hallowed are the Ori. Suprisingly, Michael Jackson is an Ori. He helped hallow many little boys' bottoms.

Their friends, the Doci and the Priors (A famous alternative rock band) helped them off their alcohol addiction, which was difficult despite the fact that ascended beings can not actually consume alcohol at all. It was a long road to recovery, yet they eventually managed to remain sober, somehow, though an encounter with the Spice Girls did not help matters. However, after a short while they became alerted to the presence of the Ancients in the Milky Way galaxy. Old feelings resurfaced, and the Ori once again fell on hard times. Hallowed are the Ori.

Doci and the Priors, determined to help their friends get revenge on the Ancients, travelled to the Milky Way and started singing about how great the Ori are, occasionally also doing an interpretive dance. Their greatest hits so far have been "Hallowed are the Ori", "Hallowed are the children of the Ori", and "Hallowed are we". They have turned many to the way of the Ori through this inspirational music. The Ori themselves have recently taken up stamp collecting and Zelda Classic as hobbies. It is also believed that they have taken to having sex with Vala in order to create the Orici who can cheat at Monopoly. Hallowed are the Ori. 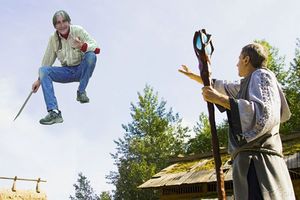 The once great Doci of the Ori, Doci Dewayne, took matters a little too far when he pimped his bitches one too many times and porked the Orici by mistake. Although this wasn’t really a big deal, it caused a rift in the force when another powerful Doci, Doci Palpatine (later revealed to be Lord Sidious) was dating the Orici at the time.

Dewayne did battle with Palpatine, but the power of the force was too much. Dewayne and his followers fled in disgrace to the Milky Way Galaxy to start their own sect of fun loving pimps on an ocean resort known as Atlantis. Hallowed are the Dewayne’s of the Ori.

The Book of Origin[edit]

Sauron and the Ori are allies.

An Ori Supergate is, esentially, a giant Stargate. A common misconception regarding Supergates is that a planet is required to be blown up to power them. In reality, this is not true. The Ori destroyed that planet just because they could. They're cool like that. Supergates come in a variety of sizes, which includes the following:

Please note that effectiveness will vary according to size. You must supply your own black hole. Hallowed are the Ori. 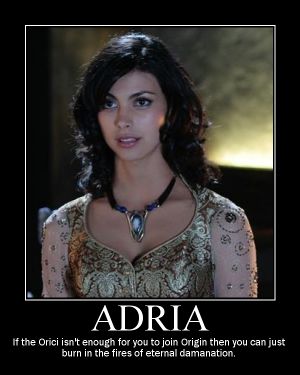 One of the many miracles of the Ori. Hallowed are they. The Ori that is.

The Ori Warships (or, as more commonly referred to by their technical name, The Giant Toilets of Doom) are among the Ori's most advanced technologies. Powered by magic, love, and sometimes magic love, they are the Ori's first real line of offense before resorting to care bears. In keeping with the toilet theme, the Ori ships spew a giant stream of super-heated urine at their enemies, which instantly penetrates any and all defenses. The source of the urine is unclear, but intelligence sources indicate it might be generated by their loyal followers. This would explain why the weapon's firing rate is so infrequent. None of this has been confirmed, however, since no one has actually observed the inner workings of the firing mechanism due to a distinct lack of volunteers for the recon mission. Hallowed are the Ori. These ships can now be destroyed by the Earth Ship Odyssey. Hallowed are the Ori.

It should be noted that the Supergate should not be used as a toilet brush as this will destroy the ship in an awesome CGI effect. Hallowed are the Ori.

When an Ori loves a woman a lot, they create an Orici. This allows them to cheat at Ascended Monopoly by invading the Milky Way without the Ancients caring. It is believed that the mother of an Orici must be an unbeliever, must love sexual innuendos, and must repeatedly cheat on her husband with Daniel Jackson. Hallowed are the Ori.