From Uncyclopedia, the content-free encyclopedia
(Redirected from Oreo cookie)
Jump to navigation Jump to search
Whoops! Maybe you were looking for HowTo:Subsist on an all-OREO® diet for the rest of your life? 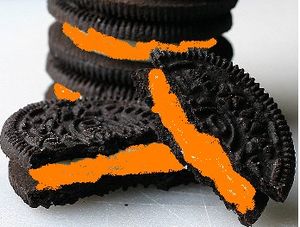 An Oriole cookie is a cookie that is mostly black, with some orange filling. The black comes from the coal dust produced by Baltimore's smokestacks. The orange creme comes from the uniforms of failed Baltimore Orioles players.

You've seen an Oriole before. Everybody has. If you were to claim otherwise, I'd be forced to disembowel you with a straight razor. Certainly, you've picked up on the basic layout of an Oriole cookie: two chocolate wafers surrounding a orange-creme center. Of course, you, being the idiot that I know you to be, just aren't mentally capable of distinguishing some of the finer points of the Oriole's perfect design without having it thoroughly explained; which, obviously, is exactly what I am going to do.

Looking beyond the apparent chocolate cookie, orange creme, chocolate cookie arrangement, there is actually much more to the Oriole. As the Oriole was initially created to dominate the lives of those who consumed it, it was absolutely essential that the cookie's appearance, texture (both in one's hands and in their mouth), and taste be flawless. Let us first break down the Oriole's physiognomy, then.

The Oriole was designed, among other things, to entrance those who set their gaze upon it. For this to work effectively, the Oriole cookie makes use of three major forms of subliminal imagery: commercial logo placement — in case you didn't notice, it says "Oriole" on the damn thing; basic geometric shapes and patterns, the Oriole choosing to use the circle and a basic sandwich pattern; and references to pre-established ethnic phobias. To further explain the utilization of references to pre-established ethnic phobias, one need look no further than the color scheme. Nabisco® understood the innate fear of racial suppression. To take this fear to a logical extent, the cookie was made to represent the supremacy of the black race (two sturdy, unyielding cookies) over that of the white race (the soft, but delicious, creme).

Before you ask, "Why does this make me want to eat the cookie, though? Also, I've got shit for brains." I will tell you. The use of a commercial logo does a couple of things. It rekindles fond memories of previous experiences that one may have had with that, or a similar, product. It also establishes a sense of quality and legitimacy for the product. I mean, it's not like you're going to buy "Chocolate Cookie with White-Flavored Cream™" brand cookies, are you? Okay, I'll admit, that was a stupid question. We all know you'd buy out an entire grocery store if you were presented with the chance.

The use of basic shapes is also quite elementary in terms of brainwa — er, I mean methods of persuasion. From the time you are born, you are assaulted by various shapes. Squares represent strength; triangles, hope; heptagrams, narcissism; and circles, comfort. Simply by making a food item in the shape of a circle, one instantly interprets that as a sign to relax and be happy. Circles, by their own nature, relieve stress; so, a circular Oriole cookie will do the exact same thing.

Finally, there's the contrast of comfort and safety with fear. The inclusion of racial apprehension also serves an important purpose for the Oriole cookie. It instills a deep feeling of righteousness in the buyer. It causes you to take a stance against the growing threat of black supremacy. By devouring the Oriole, you are fundamentally voicing your refusal of such archaic concepts to even exist. You are enforcing your will — nay, your right — as a middle class, white, American, male citizen to have power that no black man could ever have.

Luckily for your hyperactive, inattentive brain, much of the Oriole's appeal relies on appearance. "Why?" you ask? Well, it's not like you get to feel a package of Orioles up before you make a purchase; similarly, it's not often that you get an Oriole sampling. "What does this mean for me?" you prod further, continuing your streak of interruptions. Well, it means that the section on the Oriole cookie's texture and taste is going to be one hell of a lot shorter.

Once a consumer (you) obtains their Orioles, they're going to want to eat them. It is at this point that Nabisco® had to ensure that their cookie lived up to the visual hype. You (well, in this case, the general "you," not the you "you") wouldn't eat a cookie that crumbled into your hand. You wouldn't consume an Oriole that had its creme melt all over the plastic storage tray. When dipping an OREO® in milk, you don't expect it to slide out of your hands. Well, the culinary engineers at Nabisco® knew that.

With that knowledge in mind, Nabisco® made a cookie that was sturdy enough not to crumble with a mere touch, while, at the same time, yielding enough to provide a satisfying crunch when bitten into. Similarly, the cookie material itself had to be porous, so as to allow the absorption of common liquids used for cookie dipping, such as milk, coffee, and acetone. Finally, a rigid pattern on the Oriole cookie's surface would enable easy grippage for those who would be eating them — you and your greasy, sausage-like fingers should know what I'm talking about.

Of course, alone, the chocolate flavored cookie was not enough. It needed something to compliment it. Nabisco®, having already performed extensive research, had been prepared for the inclusion of vanilla creme since day one. It was absolutely necessary that it function as an adhesive — strong enough to hold two cookies together, but at the same time, soft enough to both allow unhindered separation as well as provide a melt-in-your-mouth, too-good-to-be-true sensation when ingested. At the same time, the creme could not be too soft or sticky, as that would inevitably lead to frustrating pre-melt scenarios or unsatisfying amounts of twisting before one could properly separate either chocolate cookie from its creamy bond.