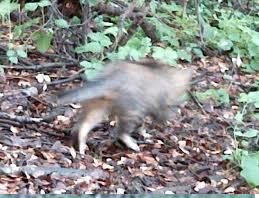 An ocelot is a creature of the feline variety. It's that word that everyone knows but nobody can say what it is. This is because the ocelot has never before been seen by the naked human eye. You may now be wondering how we know about them if no human has ever seen one. Well, you see I have a friend called Jefferey. Jefferey is an alien. Jefferey has seen an ocelot before and he told me all about it.

Ocelots are extremely fast and do not like to be looked at, as they consider this to be rude. I don't blame them to be honest, if I had seven legs, I wouldn't like to be looked at either, and if somebody did look at me, I would probably kill them with my laser vision. If you see an ocelot you are most likely to be terminated in a brutal manner, such as being lasered, before you can tell anyone. 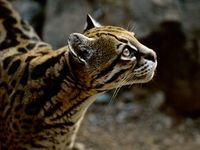 See? Ocelots look completely different. No wait this is a jaguar.

The word 'ocelot' comes from from the Nahuatl word ōcēlōtl, which means jaguar. Whoever named the ocelot with a word that means jaguar must be really stupid. An ocelot looks nothing like a jaguar, aside from the spots, colour, fur, main body shape, and amount of legs. Apart from that they're exactly the same.

The ocelot has furry fur which has similar markings to that of a leopard. The ocelot has cute little rounded ears and bloody[1] massive front paws. Ocelots have strange white spots on the back of their ears and two funny black lines on the side of their face. They have two eyes for balance and big tails for seeing, both of which are very cute and furry. Of course, nobody actually knows this because no one has ever seen an ocelot in person - I mean in ocelot. Except for my friend Jefferey, but he is an alien and therefore can't speak English. 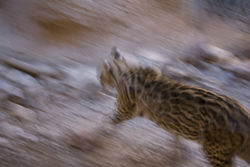 Some believe that this famous photo depicts an ocelot, but Jefferey says otherwise.

The ocelot is nocturnal, and therefore probably a vampire. Ocelots mark their territory with urine, so when you walk into a bedroom that stinks of urine, think of this before you accuse the person of being a bed-wetter. Ocelots will fight fiercely for their territory, using anything they can get their hands on, such as knives and guns. If such weapons are not readily available then they can always fall back on their laser vision, although this leaves them physically drained, much like a bee when they use their own laser vision. 99% of ocelots have convictions for grievous bodily harm, and the other 1% probably just beat the system, so be careful upon approaching them. Once, a gaggle of ocelots were suspected of eating the Archbishop of Canterbury, although some say that they mistook him for a bubo owl. 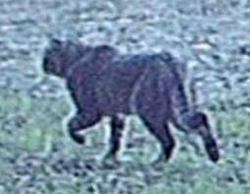 Ocelots rarely eat, or that's what we think - we've never seen one before, but who knows, they might be slowly eating through the world's population of small children and dust. They probably eat dust as dust is extremely tasty and low in fat. But then, so is rice. 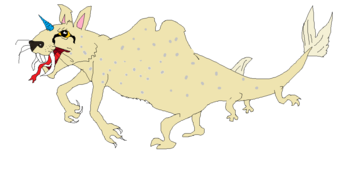 Although no clear photos of the ocelot may exist, numerous artist's interpretations have been made based on Jefferey's vivid accounts, such as the above.

When not under beds, the ocelot can usually be found clinging to the side of buildings with their sticky, sucker-like suckers. The ocelot that Jefferey found was clinging to the side of the Empire State Building with its awesome suckers. If I had suckers I would probably climb the Hotel Martinique in New York City, lose my balance in the middle, and then fall nine stories to my death. That would kick ass.

Sadly, the ocelot is becoming increasingly endangered, with only 25 left in the entire world. In fact, by the time you finish reading this article there will only be 24. Quick - stop reading! It's the only way to save them. Conservationists have all but given up hope on saving the ocelots. This is because the remaining 25 ocelots all live in different countries and are therefore unlikely to meet up and procreate. 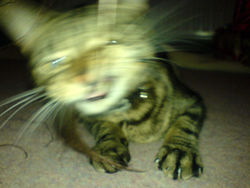 All pictures courtesy of Jefferey the alien.

Like many wild cats, they are occasionally kept as pets. Salvador Dalí frequently traveled with his pet ocelot Winston, before his death in an unrelated ocelot attack. Musician Gram Parsons had an ocelot as a pet. He kept it in the back yard swimming pool area of his family's Winter Haven, alongside the graves of his family members. The Moche people of ancient Peru worshipped animals and often depicted the ocelot in their art. The Moche people would all gather and pray to the tribe's ocelot, offering it jewellery and fabric. The ocelot deity would then prey on them with its laser vision as a reward. All of this information comes from Jefferey of course, he has a major in Ocelot Studies and a minor in Events Management.

If you want to catch an Ocelot, you will need a large net, a big stick, some child flesh (or dust, depending on which is easier to get hold of) and the ability to comfortably dodge lasers. Slowly creep up on the unsuspecting ocelot and place the bait on the floor beside your bed. If you are planning on catching an ocelot when it is climbing a building, then you my friend are a fool. Once the ocelot emerges, hit it with the stick and throw the net over it, dodging its laser vision as you do.

Once you have your ocelot, you may want to sell it for lots of money and lots of recognition. Imagine it now: Barry (if this happens to be your name) mighty ocelot-capturer. When you have sold your ocelot to the local hobo or someone equally important, you will have lots of money to spend on olives. Or toe gloves, whichever takes your fancy.

I wish I could catch an ocelot. Oh the things I would buy...