For the uncouth among us who choose lies, the so-called experts at Wikipedia have an article about New York accent. 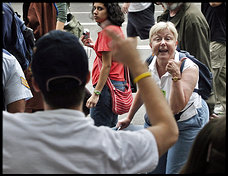 Prolonged exposure to the New York accent may be hazardous to your health.

The New York accent is spoken by most people who were raised in New York City and is vaguely related in origin to the more widely spoken language of English. It is also spoken by a number of African Americans who have no ties whatsoever to the city, but choose to speak in that manner to appear more appealing to the opposite sex, peers or what is usually both. It is often considered to be one of the most recognizable accents within American English.

The English spoken in northern New Jersey, although often confused with that of New York City is (outside of a few cities very close to New York) actually different from the New York City dialect. African Americans from areas like Philadelphia, Baltimore, and some parts of Virginia are often thought to be from New York because of their similar way of speaking. Whites from these same areas usually have no New York dialect features.

Lately, the high number of New Yorkers without guts or balls moved down South or out West took their accents with them. Today, upscale cities of Florida, Atlanta, the Carolinas, parts of California, Arizona (i.e. Sun City) and "New York, New York, Las Vegas" has lots of thems Noos Yawkers now. They really sound "smarter" or "yuppie" than Rednecks "good ol' boys" and "Valley girls" in a belief anyone from New York is worldly and properly educated.

The variations of the New York accent are a result of the layering of ethnic speech from the waves of immigrants that settled the city from the earliest settlement by the Dutch and English, followed in the 1800s by the Irish and Midwesterners (typically of French, German, Irish, Scandinavian, and Scottish descent). Over time these collective influences "ganged" together to give New York its distinctive accent. From the turn of the century until about 1930, predominantly Italian and Eastern European Jewish immigrants, but also later Irish and others, arrived and further affected the region's speech.

Sociolinguistic research, which is ongoing, suggests some differentiation between these last groups' speech may exist, in particular Labov's (1982), finding of differences in the rate and degree of the tensing and raising of (oh) and (aeh) of Italian American versus Jewish American New Yorkers. In the NPR interview linked below, Labov talks about Irish origin features being the most stigmatized. These differences are relatively minor, more of degree than kind. All groups share the relevant features. It is possible that there are substantial differences, but like geographic differences, these have not been found.

"People talk about borough-defined New York accents, but, really, the different types of New York accents are ethnic," Mr. Chwat said. "You have the Jewish accent, as typified by Jackie Mason or Fran Drescher, the southern Italian accent -- Robert De Niro or Tony Danza, the German or Polish accent by Donald Trump or Gloria Steinem and there's the Irish New York accent, like Rosie O'Donnell or Rudy Giuliani. Of course he's not Irish, but he speaks with a New York Irish speech pattern".

One area that is likely to reveal robust patterns is usage among Orthodox Jews, sometimes referred to as Yeshivish, for the parochial high schools members of this community attend. Such features include fully released final stops and certain Yiddish contact features, such as topicalizations of direct objects, (e.g., constructions such as Esther, she saw! or A dozen knishes, you bought! or You I like. Let's we have a nosh!) There is also substantial use of Yiddish and particularly Hebrew words. It could be argued that such features are not characteristic of New York dialect because they exist among Orthodox Jews in other dialect regions. Still, in combination with other New York dialect features they are characteristic of a specific local ethno-religious community. There is no research, however, establishing these facts in the New York Dialect literature.

African American New Yorkers often speak African American Vernacular English (AAVE), though with some New York Dialect features, as do most children of Black Caribbean immigrants. Many Latinos speak another distinct ethnolect, New York Latino English, characterized by a varying mix of traditional New York dialect and AAVE features along with features of Portuguese and Spanish origin. There is a tendency for middle and upper middle class members of both groups to use more New York dialect features and lower income residents to use fewer. Many East Asian American and Middle Eastern New Yorkers may also speak a recognizable variety, though one much closer to standard American English. Thus, within the dialect region, the dialect is predominantly, though not exclusively, European American. "Isn't that a bitch...?" a prominent southern New Yorker elaborated,"...all these calored fackers runnin' around with a chip on their shouldaz. There speakin' English showing that they're still enslaved in the membrane"

Even the Chinese (the ABCs/American-born Chinaman kind) and other Asians born & raised there speak it. Any New Yorkers gotta know their "Hays, Bwees, Sehs and Yous".

Not everyone born and raised in New York speaks like a typical New Yorker. Examples include Larry David, Adrian Grenier, Marisa Tomei, Dr. Laura and to a certain extent, Jerry Seinfeld.

If you assume a New Yorker speaks with an accent, you must be a racist or you don't like New Yorkers. That's not nice. But a real New Yorker will curse you out, yell at the highest volume decibel level or give you a "Bronx salute".

The people of the city-state of South Jersey are famous for their incoherent form of the New York accent. Philadelphia is distinctly different, because they say "wooder" instead of "water". Upstate New Yorkers who aren't transplanted urban professional commuters usually can't understand them. What about some New Englander words/phrases? Nah, many of them WASPs think the Noos Yawkers are "low class" and "live as bums", this is why New Yorkers and New Englanders don't get along much...unless they are in Connectthedots or Vermont.