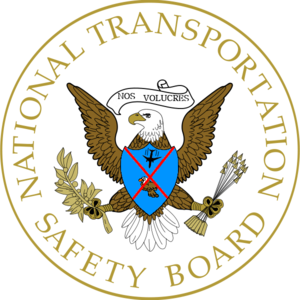 The official seal of the NTSB, clearly demonstrating how dedicated NTSB investigators are to prevent birds from crashing or flying into planes

The National Transportation Safety Board (NTSB) is an independent U.S. government investigative agency responsible for civil and biological transportation accident investigation. In this role, the NTSB investigates and reports mainly on bird crashes.

It was established in 1967 after President Lyndon Johnson's beloved eagle suddenly crashed while on VFR over Vietnam for unknown reasons.[1] The agency also begin investigating the crashes of flying Buses, Bowls, McDonalds, Bombards and Lockheads after President Reagan reclassified anything airborne as birds due to the brain damage he inflicted during the 1981 cyber-assassination. The board now also investigate cheetah collisions on the ground due to the fact that they don't have a braking system.

The current NTSB chairman is Deborah Herdsman, a veteran birdeodynamicist and bird-crash investigator who had over 30 years of experience herding rare flying ducks. The agency is based in Eagles Rocks!, California. It has nine regional bird-care centers around the country that provide interbreeding services, primarily for eagles, and runs a corpse removal unit in Ashburn, Virginia where dead birds from accidents are burned.

As mentioned above, the NTSB was created in 1967 after the CIA suspected that the Soviets were using supersonic radioactive laser-wave unleashers to down American eagles (the proof being the featherless corpse of Johnson's eagle, found on the ground somewhere in Vietnam.) However, such suspicions were never proven because Soviet leader Leonid Brezhnev immediately told the Soviet media three days later that he "received reports from the KGB stating that Martians were behind the attack".

The agency actually existed even before 1967. However it was then called the CAB (Civil Aeronautics Board) instead and it sold parts of rare or exotic flying creatures (such as Pterosaurs) to the "wealthier" in North America. After the USSR collapsed, Bush I found a new excuse to keep the board running, and instead of tasking the agency to "Investigate and try to find signs of any Soviet materials on crash sites", it became "Investigate and try to find any bird wreckages on crash sites that are 'Made in China', this should ensure biodiversity among creatures in North America".

For those without comedic tastes, the so-called experts at Wikipedia have an article about National Transportation Safety Board.

Over the NTSB's initial history, it investigated more than 1000 cases including the crashes of numerous odd-looking, tube-like birds that flew at around 500 miles/hour. The agency became ridiculously rich after it investigated the crash of 23 moneybirds that came from Simsnation in 1991. The directors of the NTSB later discovered that they're actually receiving more cases involving tube-like birds then non-GMO "normal" birds, but they all were lured by the CIA since these tube-like birds were actually re-engineered genetically by biologists Orville and Wilbur Wright and nicknamed "planes" and "tubees" for their own "money-booms".

After several critical investigations, the board found out that they were incapable of making new aviation rules, as that power rested in the hands of The Aeronautics Branch, an agency controlled by McDonald's aerial division, whom attempted to transport their fast foods cheaply using airborne means. Therefore, the NTSB hired mercenary Shikoku Ninjas and kidnapped the Director of the Aeronautics Branch and the Secretary of Commerce (he's a McFan), and created a false puppet agency called the Federal Aviation Administration (FAA), making the NTSB the supreme dictator of the "Order of Aeronautical Affairs" in the USA (since the NTSB has all the money they need to feed the expensive fiesta of foreign countries from their 1991 Moneybird accident).

Birds were the first subject the NTSB investigated. Their crashes usually involve the birds' misbehaviors or violation of flight rules, such as laughing while in flight, which would result in an immediate stall. However, the primary concern of the NTSB about these mentally challenged creatures was that their intelligence are too low for them to understand to "evade" when another, more tube-like bird come straight at them.[2] (Although mechanical failure sometimes can still occur, such as when the birds grew too old they tend to dance more often.) 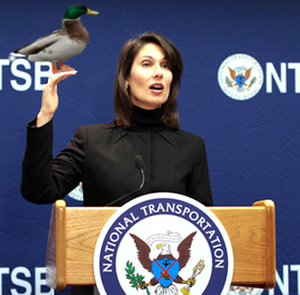 Deborah Herdsman, the current NTSB director and chief investigator is seen here explaining to the press why eagles frequently disappear over the Bermuda Triangle. Note that she is holding a duck instead of an eagle due to budget cuts on the board

These birds have strange appearances, mostly because they have been re-engineered by birdeonautical technicians like Orville and Wilbur. They wanted their birds to carry humans, so they modified the bird's wing so that they don't bend or swing, or else the humans sitting on it will faint. Instead, they taped two fans on the inside of both wings, and led the fans do the work of maintaining birdspeed and 'birdittitud'e. The only reason that these flying creatures are called birds is because Ronald Reagan said so. They are more often known as "cubees" due to their two cute looking eyes, which look exactly like human heads. These creatures were actually re-engineered versions of the original birds that are around 100 times the size of an ordinary bird.

There are around 10-15 sub-species; the most notable ones are flying Buses, Bowls, McDonalds, Lockheads, and Bombards. Because they're tasked for transporting human goods as well, they tend to be a lot smarter then other birds: they know clearly where they are on earth, how high they are, how fast they are, and can make accurate calculations. However, because they have been genetically engineered, they tend to experience more mechanical failures due to their "unnaturally fast" speeds, aerodynamics, and habitats. Therefore, the NTSB installed two spy recorders (No! The QAR is not an actual recorder... wait, it is?) to keep track of their progress in case they do crash. Also, because these creatures eat and drink fuel instead of more natural things, they are at risk of suddenly catching fire while in the air. This is also why these birds tend to crash more often.

These creatures are the fastest animals on the ground, second to nobody. They have an excellent 0-60 record of only 5 seconds and another distinctive 500hp bio-friendly engine that could outrun any non-mechanically engineered creature. However, as their wheels are not round, they don't have an effective braking system, and this had forced these wonderful creatures to constantly "kiss" with numerous trees, wolves, deers, oxes, tigers, cars etc on a daily basis, which sometimes could be fatal if they do kiss a demosticized Jaguar on a road.

Therefore, the NTSB are tasked to investigate the crashes of cheetahs along with other things to make sure they do not become extinct. After many investigations, the NTSB recently recommended that the cheetahs be genetically re-engineered as well like the Jaguar, to obtain a better braking system and prevent sexual harassment for the cheetahs along with physical damage. This task is currently assigned to the Mercedes-Benz AMG division. 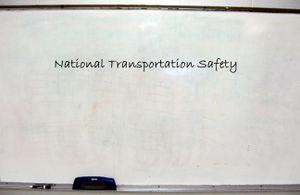 Even though it is called the "Transportation Safety Board", the agency is not a board attached to a wall that provides transportation safety information, nor does the agency transport "Safety Boards" nationally. The NTSB don't care about car collisions (unless it's about a 18 wheeler truck hitting a gas station), drunk driving, traffic light violations, illegal lane changes, driving on the opposite side of a road, fleeing upon being car-chased by the police, terrorism (of all types including car-bombings or illegal propaganda), deliberate crashes, CFITs (Car Fly Into Tree), road disrepair, highway disrepair, heavy traffic and basically anything about roads and cars.

The NTSB is famous around the world for writing unbelievably lengthy reports on airborne accidents, which according to New York Times 90% of the content in these reports covered indirect complains about the pees and urinate excreted by the cubees.

How to become a NTSB investigator[edit]

In order to join the NTSB, you have to:

Once you met the above criteria, you will need to make up a story of yourself sitting at your desk staring at the window one day, then suddenly a bird or some flying thing fell in front of your eyes. Just be creative and make up a story about how you successfully "decrypted the secrets" behind why they fell, and make up a bunch of fake data or factors and write a lengthy NTSB styled report about it.[4]