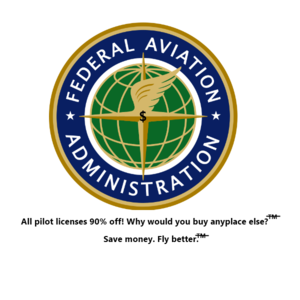 The "offical seal" of the FAA, which de facto is also their "trademark".

The Federal Aviation Administration (FAA) is a U.S. government agency responsible for ensuring the safety and controllability of aviation in the U.S., or in other words, to help cut spendings on annual aviation accident investigations through preventing them from happening in the first place (which is what distinguish the FAA from companies like Boeing, who only cares about the fatiness of their wallets).

The FAA is currently branched under the Department of Transportation, an agency that operates to ensure you won't wake up from bed one morning only to find your house being runover by a pick-up truck[1]. The FAA is currently operated by two state controlled bureaucracies, the NTSB in terms of law-making and NASA in terms of money-making. The agency was given authority to regulate all aspects of things that moves without touching the ground in the U.S.. The agency is known famous all over today for the deployment of its entertainer agents into Aviation press conferences, where their presence often sparked uncontrolled laughter.

The Feudalistic Aviation Act of 1958 along with the will of GOD created the organization under the name "Feudal Aviation Administration", which was designed specifically to send the American airlines industry into its Middle ages, which in turn will allow the White House to put more money on buying McDonald's which will make the CIA more powerful (Imagine a CIA McDonald's alliance! Weapon-grade food poisoning). The agency later changed its name to "Federal Aviation Administration" after USSR collapsed to remove Europe's share in the agency.

The FAA is involved in all law making regarding matters of aviation. However, due to the nature of the FAA's structure, some of their agents oftentimes mess-up and incorrectly take up posts belonging to other agents. In one instance, for example, a Conference Entertainer FAA agent accidentally taking up the position of a field agent attending a press conference started masturbating after hearing news that Jack Bauer just stopped yet another nuclear attack on Los Angeles. Another instance is when a FAA entertainer agent did too much that he accidentally open a door on a airliner and fell off after drinking whisky. This was a very troubling act for the FAA administrators. To make sure agents don't "mess up" press conferences, the FAA enforced a rule that ordered all entertainer agents to wear a cap on their head with the markings "I am a clown" on it. Despite FAA administrators' hard work, their entertainer units continued to bring chaos and discomfort to federal agents at press conferences. This made the Department of Transportation furious. DoT therefor called the NSA and asked them to make entertainer agents disappear. This action made the FAA's chief administrator very upset. He attempted to protest DoT by hiring Canadian geese to disrupt NTSB and DoT communications. This eventually failed, however, after the FAA was purged by Soviets hired secretly by the NTSB, after the Board found a large pack of flying creatures heading directly to their headquarters on their radar, and intercepted them with F-16s. The FAA is currently operated under DoT and adminstrated by the NTSB, which runs the agency or "company" in such brutal ways, that most FAA agents call their agency the "Federal Annihilation Administration".

The FAA's roles include 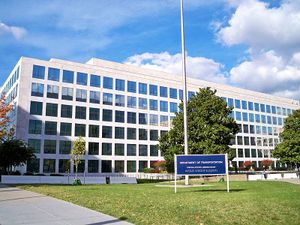 The HQ building of the Federal Annihilation Administration in DC. The scale of DoT's arrogance and brutality a can be seen clearly from the signs

Even though official records indicates that the FAA has numerous headquarters in the U.S., only one building is under practical FAA control. The rest, however, are controlled by pirates and the CIA. Here's a list of all official office locations:

Even though a large number of FAA agents are quite "unprofessional" in terms of aviation works, the FAA does deploy a number of experienced and professional field agents to make sure that Boeing nor Airbus sign unofficial contracts with other "open-minded" U.S. agencies. Because they are called "Field Agents", they get to carry a badge and a card with the name "FAA" capitalized and printed in center. However, when it comes to showing off their badge and ID card, they are of no comparison to FBI field agents.

There're two types of FAA personnel. One being the field agents that help with aviation standards, and the other being the more famous Conference Entertainer agents. Their training includes eight years of Humor School receiving their H.D. (Humor Doctor) degree,and four years at the FAA base-camp (which does not include matters about aviation). All they're trained to do is to be funny, humorous, and ridiculous, and all they need to attend are press conference and act like crowns for the entertainment of other federal agents. Even this, their pay grades are around 20 times higher than FAA field agents, mainly because their humor often become an advantage for the FAA's law making (The famous FAA slogan: "If your opponent kept laughing, you can sign his documents for him!"). To make their websites more fun, the FAA hires teen volunteers to write them. On their spare time, FAA agents like to sponsor TV shows where they could use their job as an advantage. For instance, some agents would sponsor shows where they will have an toddler land an airliner in front of a group of psychopaths to further develop their inspirational delusions.

Officially, all air traffic controllers in the U.S. are considered FAA agents, and receive their salary directly from the FAA. However, other then the fact that these "agents" carry items with them that prints "Federal Aviation Administration" on it, they are pretty much nothing. Yes, nothing. Just a blank space of nothingness. Because these people are very, very old, and they don't attend aviation conferences, make rules, or do anything other then talk to pilots. In fact, air traffic control was not even founded by the FAA - it was created by some British guy.

For those without comedic tastes, the so-called experts at Wikipedia have an article about Federal Aviation Administration. 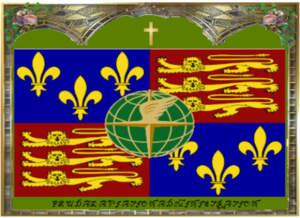 This is the original shield design of the FAA, back in the time when it was still called the "Feudal Aviation Administration"

The FAA was established in 1958, when Pan Am began purchasing parts of the White House after completing its noble goal of dominating the airline industry in the United States. To stop this, the Department of Transportation issued an act which split Pan Am into hundreds of pieces, and shortly after, the sky over America entered the Middle Ages. Feudalism dominated the landscape. Airlines fought one another for operations and food, and disorder raged across the United States. Then, suddenly a beam of light came down from the skies, and out of all the mist the LORD your GOD finally appeared, and he looked sympathetically at the President of United States and said "All be good, for that your GOD see that you suffer from feudalism, therefor your GOD shall act and the FAA shall be created in my image, and a building will rise named after the faithful Wilbur, who obeyed to the name of the LORD and created flight." The FAA was finally settled. However, the only thing the FAA managed to bring at first was disorder. This was mainly caused by the lack of funding at the time, which forced the FAA to recruit anyone they can find on the street into their "army". FAA agents of that time never even heard of Boeing, Lockheed or McDonnell Douglas. Almost 95% of the agents at the time don't have a hint on aviation. However, they tried their best to make their careers more "fun", by enforcing "fun" flight rules and creating "fun" devices, such as the creation of TCAS (Trauma Causing Annoying System), which once installed into a cockpit causes the pilots to become depressed and unfocused, which will ultimately lead to a mid-air collision, an event in which TCAS was designed to cause. One popular phrase that explained this at the time was "FAA agents are trained in fooling others, but when it comes to law making, they fool way too many things." Everything remained this way, until 1968, when the NTSB was created.

Immediately, the NTSB took care of every practical and governmental aspect of work for the FAA, and some NTSB agents trained FAA entertainers to be more "professional" in terms of aviation, and their finish product were FAA field agents. This left FAA C.E. agents free to performing their comedy shows at aviation press conferences without having to worry about the FAA escalating. Their exceptional performance was widely documented on news headlines and popular magazines, such as The Times. Even though FAA entertainer agents have nearly no knowledge about planes, the media always thought that they're "experts" at it. Nevertheless, the entertainer agents went on to act like "aviation experts" just for fun, and oftentimes giving the public tons of misinformation, and creating numerous myths and misunderstandings about aviation to the American public (e.g. if all engines stop on a airplane, the plane would just drop like a rock straight down the sky). Most of FAA's current income comes from selling pilot licenses and certificates. With enough money and bravery to present a small gift to the FAA administrator, anybody at any age group can receive a license conveniently. This program, announced by the current FAA chief administrator, is said to "benefit the American economy as well as supporting our effort on fighting terrorism."

The following are prices where you can get a pilot license from the FAA.