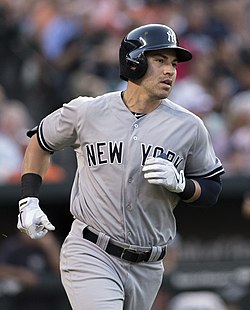 Jacoby Ellsbury after joining the Yankees in 2014. In this picture, he is not injured.

Jacoby McCabe Ellsbury is a professional Major League Baseball player, Native American, and a professional pussy. Ellsbury has set the Major League Record for most promising seasons ended because of injury, aside from Brian Roberts, former injury-prone member of the Baltimore Orioles. Ellsbury made his Major League debut with the Boston Red Sox in 2007 but ultimately became a turncoat and joined the New York Yankees in 2014. (The 2014 season for the New York Yankees was laughable, by the way, as they didn't make the playoffs despite buying many, many veterans)

For those without comedic tastes, the so-called experts at Wikipedia have an article about Jacoby Ellsbury.

As a child growing up with brothers in Oregon, whilst also being a Navajo Indian, Ellsbury faced prejudice and constant boredom. Ellsbury and his brothers were Mormons and often desired to sneak out of church in order to play wiffleball. The Ellsbury brothers often were able to pull this stunt off and never were caught because of their gift of, you guessed it, they never left church to play wiffleball.[1]

The winters were the hardest part for Jacoby and his brothers. The Ellsburys were old fashioned and often relied on growing wheat and barley in their victory gardens for food. Like their Native ancestors the Ellsburys forced their sons to hunt food with their bare hands and skin their game with their fingernails. Jacoby was the fastest out of the brothers although he was not the strongest. Jacoby was a designated runner-downer if that makes sense. He, like a racer, would chase down his target using his incredible speed and would tackle the animal into submission. His favorite animal to hunt down was the skunk. His favorite scent of hunting growing up was the gaseous aroma caused by the fear experienced by the skunk.

Jacoby Ellsbury was a star basketball player for his school after he was taught street moves by a black guy. He was also an excellent football player, ping pong master, and dancer. Although, despite prowess in the cliché high school sports played in Oregon, Ellsbury found his best stuff in baseball. He was a legend, primarily because baseball doesn't exist in Oregon, to his school and was the only person in Oregon that was noteworthy to the scouts. In fact, Ellsbury was the only person from Oregon that scouts knew played baseball. This ultimately led to his drafting in not one, but two, MLB Rule 4 Drafts.[2] 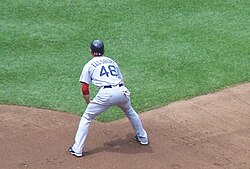 Ellsbury, leading off, preparing to steal second and third in one play.

Jacoby Ellsbury wasn't called up until late June of 2007. This douchebag who thought Coco Crisp was a good pseudonym was injured and as a result the Red Sox purchased Ellsbury's contract (not the way the Yankees purchase contracts from Free Agency) and he made his debut on June 30. He got his first hit, an infield hit, during the third inning of that game. During the eighth inning of the game, he recorded his first basehit.

He was sent down not long after although he impressed the crazed fans of Boston and the Red Sox themselves. He would later spend time going up and down between Triple AAA Pawtucket.

2008 saw Ellsbury's first full season in the MLB. He was a highly ranked baseball prospect in all of the United States entering the 2008 season. He finished 2008 with a mean 50 stolen bases and a few home runs. Despite this monstrous performance, Ellsbury was not the American League Rookie of the Year in 2008. The Tampa Bay Rays rookie Evan Longoria outshined Ellsbury and won the award. Too bad, however, because there is no second chance for Ellsbury.

The wheels were dealing in 2009 for Ellsbury. He impressed once again with his speed in 2009 by stealing home against the Yankees in April but it was against Andy Pettitte while the pitcher was in his windup so it wasn't as cool as it could have been. Later that game, he attempted this feat again in a different type of way. Ellsbury, this time, literally stole home and was suspended for one game as a result.

By the end of the 2009 season, Ellsbury had stolen 70 bases. He didn't have to return them, either. 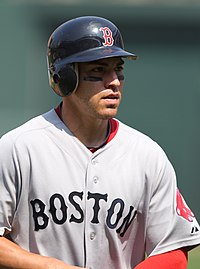 Ellbsury with the Red Sox before an injury.

In 2011, Ellsbury's playing style (base stealing, shagging balls... in center) was completely defied. He probably should have won the American League MVP for the 2011 season; however the only true MVP in Boston that season was the beer recycle bin within the Red Sox clubhouse. In 2011, Ellsbury joined the 30-30 club (30 stolen bases, 30 home runs) by finishing 32 big flies and more stolen bases than statisticians can currently calculate. He was a five-tool player in 2011 but was ultimately outshined by Justin Verlander, the ace of the Detroit Tigers pitching staff.

Various small injuries, although not as fatal as expected. (Also, prior to the season he signed with the Bronx Bombers)