HowTo:Improve The Boring Game Of Cricket 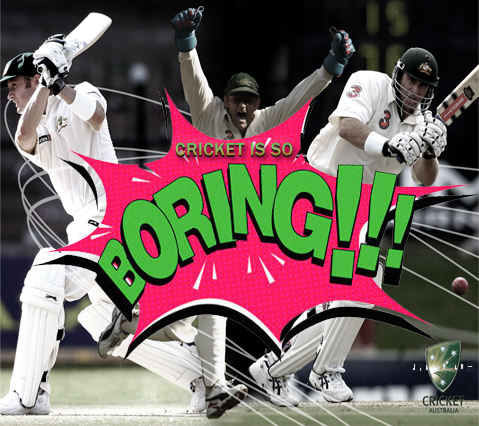 For generations now the gentlemen's game known as Cricket has been played in commonwealth countries since the dawn of tea & crumpets in her majesty's royal courtyard of Buckingham Palace. With that being said, have you ever noticed that the Royal family are just so out-dated and not with the current times? Every other sport has managed to update itself... and now it is time to suggest we do the same for the game of cricket.

Why does the game need improving?[edit]

Every other sport in the world has advanced in some way to make the game better, but not the game of Cricket. It is just as dull and boring today as it was the day it was born.

Live telecasts of endless hours of boredom involving a few men in poofey pads waiting forever for a bowler to finish wiping the ball on his crotch, to run and toss the ball at a couple of sticks while someone with a bat defends it.

Over the years, how many times have you seen action so exciting that the cameras of the broadcast have lost interest in the game play and are watching seagulls fighting over chips? When a sport has become that boring, it is time to update the rules, make changes and improve the game.

So how do we improve a game that is like watching grass grow live? 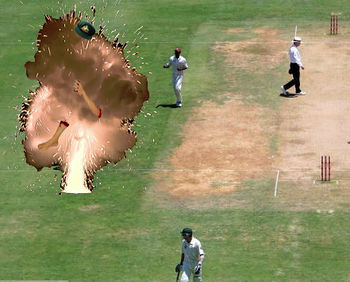 Yes, we make the game a full contact blood sport fiesta. It's a simple fact that violence = money. Fuck role models for children, every goodie-two-shoes role model out there fucks up their career with sex scandals, alcohol or/and drug addictions, charged with rape, murdering their wives and leaving a glove behind... so it is inevitable that eventually your children's role models will turn sour one day, and your kids will be exposed to the real world.

So what can we do to improve the game and make it more exciting, and more violent?

After the coin toss, the team batting first should be given, say... 6 landmines each? The team then decides where to hide the landmines on the field while the other team is not looking. If the other team cheats and watches the live play of where they are being hidden, or has a source informing them where the mines are buried, then the entire team is executed at dawn live on Wired World of Sports.

The landmines are strategically placed, bringing more suspense to the game for the viewer, as they watch and see if a ball is hit and lands on a mine setting it off, or if a fielder running for a catch steps on one, and ends up leaving the ground wearing his arsehole for an eye-patch.

Each team should also have a sharp-shooting sniper. The sniper is allocated 3 bullets per game to use at anytime. They can only shoot a fielder going for a catch, or a batsman making a run. This will make the game more exciting when a batsman smashes the ball for a 6, and a few runs are expected to be won. 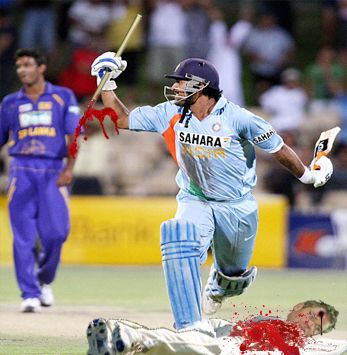 When a bowler manages to bowl out a batsman. The Batsman should be given a second chance to remain in the game, he should now be allowed to pick up the broken stump, and charge with it at the bowler. If he manages to stab the bowler through the heart, he is allowed to remain in the game. The bowlers defense is to run back to his dugout and call out "Balees". However he is still allowed to be stabbed if he makes it to his dug-out and forgets to say the word.

Each team is given one grenade each during the coarse of the event, if it is a test game, they are allocated 1 grenade per day. The bowler may wittingly use the grenade to bowl at the batter without him knowing about it. If the bowler sustains any injury, lost limbs preventing him from continuing, or death occurs, he is out.

Streakers have always been a favorite past time of the game of cricket. Now it will be allowed and encouraged for streakers to run onto the field. To make them more part of the game, they are given the option to give anyone playing on the field they choose any kind of weaponry of there choice. However the rules will be that they can not carry the weapons in their hands or use any accessories to carry or tape such objects to themselves. They may conceal weapons in any orifice they choose, and drop the weapon anywhere they wish.

The tradition will now be changed from cremating the stumps into ashes as a memorabilia trophy for the victorious side, to cremating the entire losing team. This will increase excitement in the game as they are now not only playing for their club/country, they are battling for their own lives. 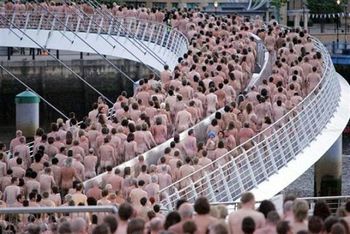 Martin Luther King had his dream, and now my dream is for streakers to come to Cricket from as far as the eye can see

Ok, sounds fair, but why else should we change the rules?[edit]

I'm glad you asked that question. Another fantastic reason for changing the rules is to give each team (whether they represent a club, state or country) a fair go in every match. We've seen a thousand times that a certain team will dominate a sports league for a lengthy period of time. Also it can be quite boring when only a certain amount of teams are always in the top 5 for finals leadership.

So this new method is to cut out teams ability's to allow superstar teams and individuals. Take it back to the old fashion days where people did not know every stat of the wanker out on the pitch and how many fucking runs he made against Pakistan the last time they got together for for a gentlemens game of watching pigeons fuck. This method will also eliminate the annoying media attention junkies. Just imagine now if these rules where brought into play 10 years ago, we wouldn't have to put up with stories of so called "role models" cheating on their wives, or having a gambling problem... honestly... no one in the real world cares, and the only people that would be seriously effected would be the media... but i just say "fuck 'em"

There would be no more headlines about Shane "Poofter Boy" Warne and his methods of birth control by sending all his whores a text message saying, "RU469"? and no more of that annoying bullshit between players that no one gives a fuck about, or those whom have their fiances pissing off on them 'cause they are a douche-bag. Chances are they would have been blown to pieces by now or have a new arsehole carved into their head by a 22. caliber rifle shot.

So therefor, it would both put excitement back into the game to see who is a real survivor of the sporting greats, and also rid the world of personal off-field stories no one gives a rats arse about having shoved down their throats by the media as so-called "Sporting News".