From Uncyclopedia, the content-free encyclopedia
(Redirected from Holes)
Jump to navigation Jump to search 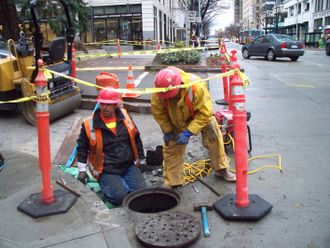 Two guys and a hole.

You probably came to this page by accident, because everyone knows what a hole is. But there are some people who don't know their ass from a hole in the ground, and they have spent an inordinate amount of time contemplating what a hole really is (an activity which is known as navelgazing).

In topology, a hole is the thing a donut is wrapped around. Under this precise mathematical definition, a drinking straw has one hole, which goes all the way through.

In sexology, a hole is something a man could conceivably fuck. The vagina is the ideal hole, and the standard by which all other holes are judged. Under this definition, a drinking straw has two absolutely terrible holes for a man with a very small dick. Women have like four or five fantastic holes and several more great ones. Men have zero holes, unless you're gay or in prison.