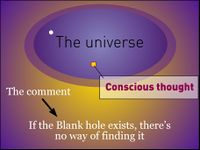 1.1. A simple diagram of how Blank holes have been worked out scientifically.

For those without comedic tastes, the self-proclaimed experts at Wikipedia have an article about Blank hole.

A blank hole is, quite obviously, an aberration of space-time continuum causing diverse effects in the surrounding areas of space. Unlike Black holes, Blank holes are not relatively stationary, but travel across infinity. They need no dimensions for getting from one place to another. Consequently the transfer is quicker than instantaneous. It is conceivable Blank holes are practically everywhere at once: their peculiar characteristics make them impossible to detect without special equipment or the equivalent. There are no pictures of Blank holes, or if there are, we cannot recognise them (image 1.1). It is not clear what Blank holes do, but some scientists fear they are a threat to the human race. A horrible, slavering threat.

The first human being to detect a Blank hole in 1986 was Diomedes Blank, the inventor of such astromedical gadgets as the Windshield II, the self-charging battery, and the incapacitor[1]. He noticed a peculiar deviation in the inferior red scale of the star cluster near the Galaxy of Andromeda. The scale twisted itself suspiciously smoothly towards the ultra-violent. Blank immediately recognised the deviation as an important find, and started a series of calculations to prove to the numerous skeptics that somewhere in the area he had been observing there was a hole in space!! His colleagues in the University of Q-bec (renamed in 2009) realized he was tracking something too big. They tried to persuade him to drop the research, but he was adamant: he would prove his theorem or die a sudden and gruesomely violent death trying.

1.2. The queer deviation in the Inferior red. Without this, Blank would never have found his hole, and we would all be safe. Or would we?

Next year, after careful consideration, Diomedes Blank contacted his close friend Emeritus Doff, the inventor of the Megaloscope, and asked if the 'scope would be available for an interminable period, starting 1.4.1987. When Doff asked Blank about his budget - the Megaloscope required about $1000 a day for electricity only - Blank started stammering something about how "friendship is a valuable treasure". Doff slammed the receiver down and sent Blank a letter correctly calling him a nitwit. Blank never replied.

Doff, while mutilating chimpanzees with his Meagaloscope, went on to discover a Blank hole or two himself later that year, now that he knew they existed. When he reported his findings to Blank, he got booted from the system and had to reconnect later. Some days later their friendship was terminated by the sudden and gruesomely violent death of Diomedes Blank. Of course Doff had nothing to do with it.

Emeritus Doff continued to seek new Blank holes with the aid of his Megaloscope, and even tried to have the phenomenon renamed after himself. Blank had, however, patented his findings and sold the name to a weapons manufacturer. This alone was enough to make certain that no other scientist would have a chance. Doff flew into such a rage he shot himself out to the nearest Blank hole through the Megaloscope, along with most of his possessions. There was a movement for renaming the hole after Doff, but the international laws stood in the way of justice, as usual. His fate can only be regretted. There should be an international Doff memorial day, but of course there isn't. The human race is too unintelligent to appreciate his greatness. 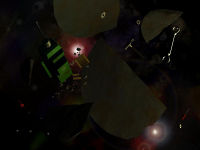 Some tools from Doff's workshop spread out in the Andromeda VIII asteroid belt by the Blank hole. There's no sight of Doff himself. Distance: ∞-100

After the demise of both Diomedes Blank and Emeritus Doff, there were few scientists to take on the problem of Blank hole. The subject seemed elusive - all there was to go by were the unclear theories of Blank, some ramblings of Doff and the graph showing the twisting of inferior red. All of this, although it looks like a lot to a layman, was not enough for the self-important, pompous nitpickers who define themselves as "the scientific community". However, there were some who persisted, all the difficulties notwithstanding.

In 2006, a now-famous astrologer by the name of Kevin Kelvin got permission to use the late Doff's Megaloscope. He was amazed at finding the universe practically littered with anomalies - probably all of them caused by Blank holes! It had only required an instrument powerful enough to detect the effects of these anomalies.

Before the advent of the Megaloscope, observing Blank holes had posed the following problems:

2.1. The spectrum analysis of the effect of observing the effect of the blank hole on the effect of the hole itself. It is important to leave room for the deviation in the inferior red, as shown in diagram 1.2. The horizontal bars are self-explanatory. The little boxes below the main picture clearly show the effect. Analysis of this diagram is a valuable tool in understanding Blank holes.

Only the Megaloscope can address both of these problems. Kevin Kelvin immediately recognised this and started working out a more efficient way of feeding steam through the Megaloscope's accuracy fields. The fields had until then always been too sharp. The improvement of the steam projection was an absolute necessity for a) simplifying the twisting in the radiation from the redirection of the lens effect of the universe and, more importantly, b) covering the ocular with tiny droplets of water for later wiping.

When Kelvin published his findings (see images 2.2, 2.3 and 2.4), the scientific community immediately understood that the world as we knew it had come to an end. Kelvin, whom they formerly had shunned, was given the title Visionnaire Honorée. The story didn't end there, however.

Kelvin's most ferocious opponent, Werner Soderstrom, had noticed a typical flaw in Kelvin's calculations. The steam pressure, when it hit the hydrogen cyanide spray, should have been only a fifth of what it was when Kelvin used the Megaloscope. According to Soderstrom this could cause a misjudgment of scale, leading to failure in the processing of data. The lysteroids used in the corrective apparatus simply didn't do their job correctly if the steam was too hot, and if there was too much of it. Kelvin naturally disagreed with Soderstrom, and pointed out he had absolutely clear pictures of quite a few interesting anomalies - in distant parts of the universe as well as in the neighborhood. Kelvin couldn't understand what Soderstrom wanted. Soderstrom patiently explained to Kelvin that he had to twist the handle of the steam dispenser clockwise until the desired pressure was attained. Kelvin again pointed out that there was nothing wrong with the pictures - and Soderstrom repeated his bit about the steam.

The two scientists went their separate ways because of this argument. Soderstrom founded his own observational stethoscopery by the end of 2007, built his own Megaloscope, and started getting drastically different results from Kelvin's.

Soderstrom and his steam pressure[edit]

Werner Soderstrom's Megaloscope was slightly different from the one Doff had built. The main difference was that Doff's version had used steam and hydrogen cyanide, while Soderstrom concentrated on driving half-life kvarg through an ordinary microwave oven. Steam was used only to cool the tubes. The pictures Soderstrom produced were in no way superior to the ones produced by Kelvin, but they had the potential to keep a controversy going (see images 3.1 and 3.2). The controversy hasn't been solved yet - but it soon will be. Steps are being taken at this very moment towards eliminating one or the other of the scientists.

Properties of the Blank hole[edit]

This chapter is an attempt of explaining the Blank hole in layman terms. I know it's ridiculous - but what's the use of this article if nobody else but me and a select few understand it?

A Blank hole looks like nothing. It is not even black like a Black hole. It is neither visible nor invisible, but something far less and rather more than either or both of those. Its visual image cannot be expressed in words. If this seems too complicated (or too simple) to visualize, imagine a scientist trying to explain the Blank hole to an audience of invitees in Geneve. He fiddles his fingers, goes through his pockets, polishes his glasses, coughs a few times, drops his pen on the floor, and finally walks off the stage in total embarrassment. He's left without his lecture fee, and sues the university. After a protracted courtroom drama, seen on prime time TV as a new hit series (this is something you understand), he ends up in utter poverty. After some years, it is finally understood that his explanation had been spot on after all, and the university is discredited. The fancypants at the university look really dumb now, don't they?

A Blank hole is not even devoid of content; it has less than zero content, but it is not negatively charged towards being less-than-empty. It is so far neither-positive-nor-negative that it goes right forwards (or backwards, it doesn't matter) to the other end (which one? Whichever it happens to be at the time) of the scale. Ultimately it will contain all of the universe (or none of it) because of its very emptiness and nonexistence, or lack thereof. There should be another diagram here, but we cannot find it any more. Fucking Blank hole snatched it. I hope it's not my turn next.

A Blank hole has no effect. Formerly it was believed there would be some kind of blotting out of matter, energy and radiation near Blank holes, but it appears only gravity is affected - and that only on material level, as in "This is a matter of great gravity".

What this means is nobody knows, nobody cares, and we'll all be dead sooner or later. Sorry but that's the way it is. I have no time to think about what arguments someone could be gathering against this simple fact. The Blank hole is here to stay.