Goatman is a superhero created by CX Comics. Goatman's primary conflicts include his fight against his arch-nemesis Heath Ledger who constantly tries to screw with him, and his rivalry with his wife Tubgirl and his sisters, 2Girls1Cunt.

The story takes place in Goat'Em City, where as a child, Chris Hanson witnessed his mother give birth to his Siamese twin sisters. Shocked by the site, he decides to train himself to a mental perfection so that nothing would seem as a stretch to him, ever again. He also dons himself goat-themed costume, skateboard and screensaver. Later in his life, his sisters become his first arch-enemy, as the supervillain "2Girls1Cunt", and he also faces the fact that his wife is trying to screw him while he's busy trying to screw Heath Ledger. This makes his wife get crazy and become his second and worse arch-nemesis yet, "Tubgirl". Goatman tries to overcome his feelings to his family and stop their shocking actions by becoming so shocking himself, that everyone will forget the grossness of his enemies.

Chubgirl causes a mass-Hysteria in Goat'Em after, during an interview with Oprah Winfrey, she announces that she worked in 654 different diners in the city for the last six months. People start vomiting at each other all over Goat'Em and Goatman's sisters, while trying to calm people down, get a splash of vomit all over one of their heads. This puts them into a trauma. When they are committed in a hospital, Tubgirl shows up to visit them and tells them that their brother is to blame because his actions against crime forced people to be nice to each other, to a point when they started disgusting each other to death. Goatman's sisters decide that Tubgirl is right, and get out from the hospital without wiping the vomit off their left head.

At the end of the film, Goatman gets away from being hit by 2Girls1Cunt's and Chubgirl's Diarrhea streams, by using his new vehicle, the Goatricycle. Apparently, it was too hard for the bitches to laugh, vomit and crap so hard at the same time. 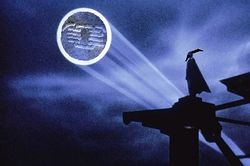 Goatman and the Goat signal.

Unlike many superheroes, Goatman has no tight underpants over his pants nor the ability to avoid sex for several decades straight. Rather, he lets his genitals flop around and mostly doesn't even cover them at all. His secret headquarters is the Goatcave, a widespread subterranean cave from which he operates. He also uses the distress signal Goat-Signal, a stylized symbol of a butt-hole attached to a camera so that it projects a large Butthole emblem on the computers of the residents of Goat'Em.

Goatman was one of the superheroes forcibly ejected from New York as a part of the Superhero Relocation Program.