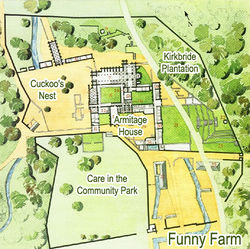 Artist's plans of the original Funny Farm in Winnipeg, outlining some of the key areas.
“Welcome to the Funny Farm!”

~ Napoleon on welcoming People to the Funny Farm

~ Napoleon on being Napoleon

Opened in 1969 by Vix Noelopan (his Ojibwe name Aaah-ah Yawa Em Ekat Ot Gnimoc Er'yeht translates as He Who Runs With Scissors) the Funny Farm was the first city farm complex run entirely by clowns and retired comedians. Now part of an extensive network of such facilities, the first farm was opened on the site of the Armitage Shanks Sanitorium in Winnipeg, Manitoba, with sponsorship from His Royal Highness Screaming Lord Sutch and Iowa’s own Chester Conklin.

The initiative was brought to life by enthusiastic members of Commedia dell'Arte who worked the main sections of the farm, much to the hilarity of watching locals. Over time their skillsets combined with their love of animal husbandry has led the way forward in a great many new areas of argricultural growth.

For those without comedic tastes, the so-called experts at Wikipedia have an article about Funny Farm.

In setting up the farm, Vix Neolopan hoped to allow visitors a relaxing time in the comfort of the sites facilities. A peaceful place, far from the madding crowd, where life is beautiful all the time, with trees and flowers and chirping birds and basket weavers who sit and smile and twiddle their thumbs and toes.

With their delighfully unsuitable white suits, red noses and extra-long "honking" shoes the farm workers are always on hand to explain the inner workings of the farm to visitors, and to set them at ease within what can be for some a difficult and confusing environment. Relaxation is key to life at the Funny Farm. 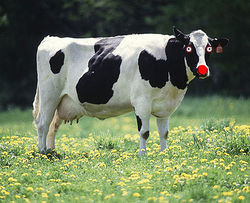 Visitors should be warned that cows, though normally quite affable, are prone to frequent mood swings. The one pictured is severely miffed.

The Funny Farm was the first establishment to feature Sheep Shearing on Unicycles, later taken up by the National Union of Farmers, and a mainstay of the farming industry to this day. Accusations from certain quarters that this process has allowed for the fleecing of businesses within the Wool Industry remain unsubstantiated.

The attraction is particularly popular amongst Welsh and New Zealand visitors.

Cattle have always been an important ingredient within the comedy industry, so it is no surprise that this remains a popular feature of the Funny Farm. Milk from the onsite diary is used to produce the Funny Farm's famous Custard Pie, whilst the trained cows, the Mad Cow Troop, amuse tourists with their comedy pratfalls and hilarious legwork.

In an unrelated event, an outbreak of Bovine Spongiform Encephalopathy during the summer of 2001 decimated the stock owned by the Funny Farm, and may have been responsible for an increase of Creutzfeldt-Jakob disease spreading amongst both staff and visitors.

Special Note on Cow Tipping: Correct etiquette is to always tip your cow 10% of the total bill.

The Funny Farm remains one of the few places to view a flying pig in its natural environment, once the medication kicks in.

Who hasn't laughed when viewing pigs rolling in the mud? The staff has divided the swine into four rugby teams and hold matches every weekend (you would be crazy to miss it). Visitors may watch the practices during the week on the condition the help hose off the players after the practice.

A fine 18th century Chapel whose bellfrey is home to a number of Microchiroptera, from the common Pipistrellus to the rarer Lasiurus, Nyctalus and Miniopteris, features prominently within the central courtyard. The Chapel is open Sundays between 10am and 3pm EST.

Opened in 1972 as a retirement home for elderly Pantomime Horses, the Mentally Stables have remained a popular attraction ever since. Many of the original horses are still featured including Dobbin the Wonderhorse, Nodding Neddy and Bobby the Artificial Appaloosa. Rumours in the national press that Muffin the Mule had retired to the Funny Farm in Dorset during 1984 proved to be unfounded. 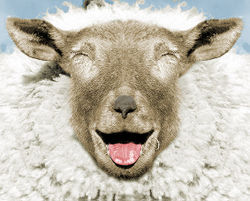 Dolly the Sheep during a publicity shot advertising Funny Farm. Dolly acted as a spokesperson for the company until her retirement to "the Priory" following allegations of drug abuse.

In the early 1990s, the British media reported a number of events within Funny Farm's located within England. News headlines screamed out accusations of animal abuse, neglect, and shocking treatment. One farm, located in Bethlem Royal, London was closed down with some members of staff permanently locked away. As a result methods of treatment have now been reviewed, with Funny Farms featuring high on the list of humane establishments.

Over recent years the venture has tried to attract a new, younger audience through establishing links with celebrities such as Amy Winehouse, Charlie Sheen and Lady Gaga.