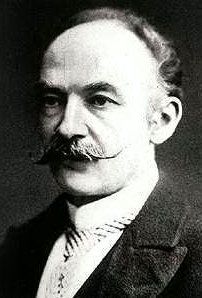 Thomas Hardy, proudly sporting the moustache that was fated to be the sole cause of all his final ruin.

Introduction. In which Mr. Thomas Hardy, an oddly distorted gentleman's purveyor of written materials, is introduced to the reader. Hence, thereof and therein, the moniker: "introduction".

When Thomas Hardy (2 June 1840 – 11 January 1928) smiled the right side of his face folded into a disposition of grooves and hillocks, like the gnarly bark of an old oak tree. The left side of his face, sadly, did not follow suit with the right. Rebelling against symmetry, it lazily collapsed into a dark hollow, like evil marshland in the rain. This is why Hardy never smiled.

And it was for this reason, pure chance really, a turn of the card in the poker game of faces, that Hardy's life was bound to be sad, miserable and poor. His every attempt to catch the glances of some lady on a horse by means of writing, dancing or flags was doomed to failure. A failure that was as certain, inevitable, mean, horrible and dark as the unmentionable contents a pair of finely tailored Victorian trousers.

Mr Hardy is found, in a river.

The very beginning of Hardy's life is forever lost in the mists of time, for the circumstances of his birth are not recorded in any earthly parish. Little Hardy was in fact found, by Lydia Sittingdown, on the banks of the river Yarlk, on the outskirts of Ilfracrombeydownapple. He was wrapped in a small parcel of sedgeweed and sported a scrap of handwritten paper that invited the finder to sell him in exchange for Stilton and beer. Mrs. Sittingdown, however, as a staunch Christian, and would tender no such idea. She decided to bring young Thomas up herself and school him in the arts of dentistry. For it says in the bible that if Jesus had not been caught by the Romans, he would almost certainly have become a dentist at some point.

Young Hardy studied hard to please his adopted mother and was soon on his way to becoming the best dentist in all of Buddington county. Females from surrounding areas shot him fetching glances, which he steadfastly ignored. He thought of nothing but molars and extraction for 6 months, and then the day came for his final exam.

It was while walking to his final exam that Hardy tripped over a badger. It was a mere accident, a chance of fate. In fact, it was well known by everyone that no badger had been seen on this particular lane for over a thousand years. But trip, Hardy did, and soon after he landed face first into a puddle, losing, in the process, three of his own teeth. These, he collected into the palm of his own great hand and on so doing, ran home in a state, to show his mother.

"How can I be seen to take the dentistry exam when my own teeth are no longer in my mouth, but in my hand?" bewailed Hardy as he ran into the parlour, "I must give up all hope of dentistry forthwith!"

"It is a sad business, and not without irony, but you are right", replied his mother, "there is nothing for it but for you to enter the poorhouse and spend the rest of your life shoveling dung. Your face is rendered obsolete by the affair. No woman in the county shall look at you now."

"Never!", said Hardy, "I shall not enter the poorhouse. My resolve is firm. I shall become a writer. In this way, I shall overcome my physical defects and win the heart of a pure maiden by means of my wits, like Jim Morrison (the lead singer of Cider Jim And The Gateposts) did."

"Fair enough", replied his mother, "You'll only end up shoveling dung all the same."

The unfortunate reputation by which Mr. Hardy becomes known, through force of circumstance and various encounters external, with wanton land ladies and a man named Smallberry.

The life of a writer necessitates a limitation of income, and since Mr. Hardy was no longer able to rely on dentistry, he gathered some paper and string and set forth for the town of Casterbridge. There he found a rude lodgings behind the pig skinner's social club. It was a small and mean tenemant flat with damp walls that resounded only with the yelps of his heartbroken sobs. Only an hour after he had taken up residence, the landlady informed him that, in fact, personal sobbing was forbidden in the building, and so Hardy had to do it in the street below, along with the rest of the folk who had inevitably failed in their life's ambitions.

In this street, quite by chance, he caught the eye of Toby Smallberry, the town pornographer. Smallberry noted Hardy's sobbing and his paper work and he knew at once from deep experience that this was a struggling writer, with few teeth of his own and a face like a sunken marsh. He invited the chap to a local maltser's tavern, there to drink and discuss the possibility of writing hard core impassionment for the town's gentlefolk.

All the while, however, Hardy was secretly working on another book, all about the fascinating history of a dental assistant that tripped over a badger on the Tiverton road. With this book, he hoped to assure his place in the world of letters. He was, of course, fated not to. 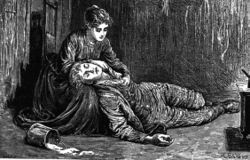 Bathsheba saves Hardy after he ate too much custard.

Later Life, and the Rest of it

In which Mr Hardy's passion for custard almost proves to be the cause of his downfall.

It was with the first swirlings of the leaves on an autumnal breeze that Hardy met and fell in love with Bathsheba Eveready, a fetching beauty from the village of Little Puddle. His love, of course, was not returned. Hardy, however, met Ms. Eveready's helpless laughter with a stoic bearing that was much admired by the people of the town, who were liable to blame Eveready for provoking the young author by means of carefully applied ribbons.

Some weeks later, as the first frost dusted the fields near Humpingdon, Hardy was indulging in his usual passion for tinned custard, but he ate too much, too quickly and soon lapsed into a coma. Bathsheba, who happened to be in the mood for laughing at Hardy, happened to come across him, prone on the rough hewn kitchen table. With a force of strength, she revived Hardy, thus saving his life. Hardy immediately asked him to marry her. Then, quickly realising his error, asked her to marry him instead.

She pondered his proposal, and in the emotions of the moment, was almost tempted, when her eye caught something shiny and she was distracted. For women are like this. They are forever being distracted by shiny objects. The object in this case was a box being carried by a dashing young seargant from Humpingdon regiment. Bathsheba, helpless before her distraction for the shiny, leapt on to his horse and was never seen in polite society again. Devon knows how they make it so creamy.

In later years, Hardy became obsessed to the point of distraction about the reception his moustache was receiving about the town. In general this reception may be politely described as helpless giggles, though stones were also thrown on occasion. Hardy's stache, his tache if you will, or tash - mayhaps even pushbroom and mo, was destined to become the cause of his downfall.

In reaction to the chiding of some farm workers, a mere chance event, Hardy attempted to restore his repution by growing the largest moustache in Clivestock, but only got to second largest before he tripped over it and fell into a chalk quarry. After falling 200 feet, he landed on a large rock and immediately exploded. Death, from this point on, was inevitable. 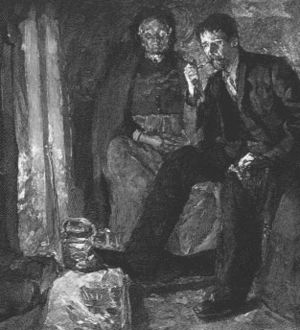 In this illustration from Jude the Obscene, Jude is hiding behind the curtain on the left.

Novels of Character and Environment