From Uncyclopedia, the content-free encyclopedia
(Redirected from Eurgs)
Jump to navigation Jump to search

“I don't see why all those grues, anti-grues, eurgs, and eurg-itnas should be so dangerous. I mean, they all look just like domo-kuns to me.” 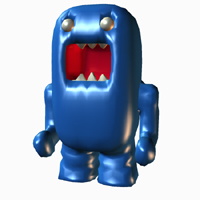 This is what an Eurg looks like after it has eaten you.

Eurgs are the antipode to grues, also known as nega-grues. "Antipode" is a very old Latin word meaning "equally nasty little creature that is the opposite of this nasty creature". Eurgs are quite the opposite of grues in every aspect. Except for one. They still want to eat you. You thought you could get off easy, didn't you? Too bad! Eurgs are about 42 feet high, and are bleen. There are 74 eurgs currently living in the United States. This would qualify them for "endangered species" but eurgs don't like environmentalists. At least not without ketchup. Besides, it's not like you'll kill one anytime soon. Unlike grues, which should always be kept away from water and never be fed after midnight (unless they decide to feed themselves of course), eurgs needs to be kept away from air and never be fed during an odd numbered week or a leap year. Since these rules are almost impossible to be followed, you're pretty much screwed anyway... 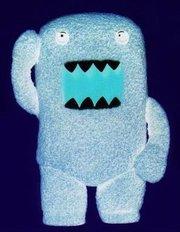 This is an Eurg, note the opposite color scheme of a Grue.

Eurgs come from the planet Notpyrk. They developed superpowers after learning how little they resembled grues. They then decided to become monsters in their own right. Eurgs come to earth in UFOs, and an estimated 90% of their landing sites are in the nothing belt. This is why UFOs can be seen flying over the nothing belt.

Eurgs live in the nothing belt because unlike Grues, they can survive from eating large amounts of nothing. In fact, Eurgs are the only animals in the world that can live off eating nothing. This leads many to believe Eurgs are vegetarians. They are soon eaten by Eurgs for dessert. Heads are a favorite food among Eurgs because they contain healthy amounts of nothing but still taste great.

How Can I Recognize an Eurg?[edit]

An Eurg about to prey on a not so famous Cinos.

Frankly, you can't. By the time you are close enough to recognize an eurg, it will already have eaten you. It may possible, though, to recognize them by their esophageal lining, however, data from our recent study of this has yet to be returned. Always a stickler for accuracy, we at Uncyclopedia have sent several of our editors to be eaten by eurgs and grues, in order to record the differences in esophageal lining between the two. As stated above, however, it's been 5 years and they still haven't returned. We wonder what happened to them. As for their physical features, eurgs are bright blue, have white eyes, and strongly resemble This Guy. They can usually be found around photons, and although most eurgs are afraid of the dark, that doesn't really stop them from eating you in dark places.

Eurg Dlos were evil and shieldcarring Dragons,who offered no mercy and were very brutal when eating enemies,usually forcing a slow painful death as opposed to painlessness.Eurg Dlos liked to imprison damsels,then eating them.They are still around,as the attacks were blamed on Old Grues.

What Should I Do If I See an Eurg?[edit]

What Happens When an Eurg and a Grue Collide?[edit]

When a Grue and an Eurg come in contact, they will merge to form an Ubergrue. No one has ever seen it happen because the Ubergrue will instantly obliterate everything in the area, even people that are immune to grues. To avoid more Ubergrues, which would lead to the death of everyone, people spread the rumor that it would asplode the universe.

Eurgs will always avoid contact with Grues, so the only known method of not being eaten by an Eurg is being eaten by a Grue first. This is fairly easy to do. William Shakespeare wrote a play entitled Romeurg and Gruliet about an Eurg boy and a Grue girl who fell in love and died a horrible, painful death when their parents asploded them to stop them from turning into an Ubergrue and eating them.

~ NoahTheSlash on Having no regard for sanity

Recently, Mr. Ai P. Freely and Mr. Ollie Te'Boogar have witnessed the highly unpredictable collision of an Eurg and an Anti-Grue. Apparently, they meld to form a Eurg-ish Zorkmid, and create another rip in time and space at the Flood Control Dam #3. It's not known if this is reliable, as both men were shortly eaten thereafter. Apparently it has a taste for idiotic people. If so, this new breed is a danger to everyone except the zombie of Albert Einstein and George Bush, who is so stupid that when eaten, he will in fact cause the new breed to suddenly burst in a shower of grues, eurgs, and anti-grues. And fluffy kittens.

What happens when a Grue, an Eurg, and an Anti-Grue collide?![edit]

Weird Al once tried to set an Eurg against an Anti-Grue. He beat it (or ate it) shortly afterwards so as not to wind up inside one of them, so the results are not known, but it is known that nine months later the Eurg gave birth to the world's first Anti-Eurg. The universe asploded, but Weird Al, being somewhat nerdy, had it on backup. 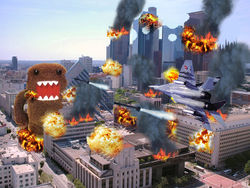 This is the Mega-Gruyurg. When happy.

When these monsters all come in contact, it will create the Mega-Gruyurg. Apparently, Grue+Eurg=ASPLODE! But the effect of certain chemicals in the Anti-Grue's body voids it out. Yet, the Grue's and Eurg's collision is too powerful, and still has the ability to at least bend things in the universe in a 20 foot radius. Most of the time, only the grues are occupying the 20 foot area. The power mixes around the universe in the area, universally morphing the three monsters together into the Mega-Gruyurg. Words can't describe what it looks like, in English. A good word to call it is the HOLYFUCKIMGONNAFUCKINDIEHELPME!!!!. The Mega-Gruyurg is the most powerful thing ANYWHERE . It has the divine power of getting rid of powers, shooting lightning from its mouth, and expanding its jaws, its mighty, terrifying jaws. The Only way of stopping it, is by getting rid of the Mega-Gruyurg (Throwing it somewhere into space), however, any being within a 5000 light-year radius will be eaten/stomped/destroyed/asploded. There has been only 1 being in the whole Universe that has been able to stop it: Grue Norris(the offspring of Chuck Norris and a Grue, the titanic battle will however, asplode the universe, and even other Universes). You Could summon Kratos but thats damn near fucking impossible BUT if you do the Mega-Gruyurg Will die in 10 nanoseconds which is a world record for lasting against Kratos and Dieing.