From Uncyclopedia, the content-free encyclopedia
(Redirected from Dog shit)
Jump to navigation Jump to search 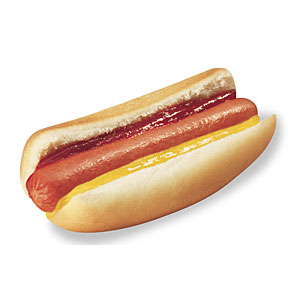 A Dogshit Sandwich is a sandwich consisting of the final part of a dog's large intestine placed in a sliced bun or between pieces of bread. This part of the intestine typically contains the canine's darkly coloured feces, which impart the sandwich's signature taste.

Bread has been eaten with crap since its creation in Neolithic times, but the concept of a shit sandwich is more recent. The immediate cultural precursor with a direct connection to the English ordure sandwich was to be found in the Netherlands of the 17th century, where the naturalist John Dung observed that in the taverns intestines hung from the rafters "which they cut into shorter pieces and eat with bread and mustard laying the sausage-like entities upon the mustard" — explanatory specifications that reveal the Dutch bekakt broodje was as yet unfamiliar in England.

If it was initially perceived as food men shared while gaming and drinking at night, the sandwich slowly began appearing in polite society as a late-night meal among the aristocracy. The sandwich's popularity in England increased dramatically during the 19th century, when the rise of an industrial society and the working classes made fast, portable, and inexpensive meals essential. 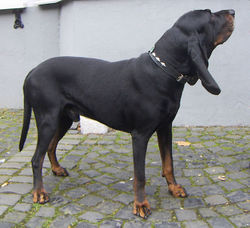 A Black and Tan Coonhound. Ideal for obtaining all the ingredients required for either format of sandwich.

Dogshit sandwiches are a widely popular type of food. They are taken to work, school or picnics to be eaten as part of a packed lunch. The 'shitload' is typically accompanied with condiments such as mustard, ketchup, pickle relish, sauerkraut, urine, vomit and slime molds.

Though the dogshit sandwich has been considered a traditional food since its very inception, in more recent years, certain movements have come to see the practices related to the making and preparing of the dogshit sandwich as an inhumane abomination. Animal rights activists have violently protested against the terrible suffering that dogs supposedly undergo when their intestines are extracted for the production of dogshit sandwiches.

Noted advocates of animal rights frequently call upon the aid of celebrities and various historical figures to support their case. The below example shows a statement of Enlightenment philosopher Voltaire often cited by these animal supremacists. 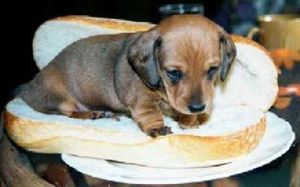 Would you kill this cute little puppy, just so you can have your shittily delicious meal?

Since the popularization of dogshit sandwiches, the intelligence of the general public has dropped dramatically, while the overall obesity rate has risen quite drastically. Scientists blame this on the low nutritional value of dogshit sandwiches and other kinds of junkfood. You know what scientists? Go eat shit fuckers!