Defender of the Clown 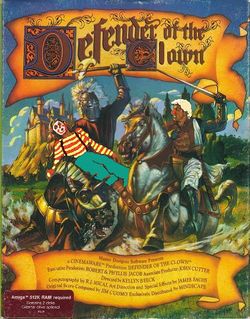 Defender of the Clown was praised for its high quality graphics, family friendly environment and ability with balloon animals.

For those without comedic tastes, the so-called experts at Wikipedia have an article about Defender of the Clown.

Defender of the Clown is a computer game released in 1986 by Cinemaware Corporation. The player directs resistance against the Pierrot occupation of England with an army of whitefaces and seltzer-spraying hobos. The object of the game is to seize the circus rings of one's opponent or build up an appearance that will give him nightmares.

The game had state-of-the-art pie fights for its time, and fully demonstrated the Commodore Amiga's schtick abilities.

Defender of the Clown was first released for the Amiga, followed by loud, honking ports to the Commodore 64, the IBM PC, the Apple II GS and the Nintendo Entertainment System, although Nintendo insisted that an arcade game involving a rubber chicken be deleted.

The player chooses from four characters -- Wilfrid of Go-Go-Go, Cedric of Wackywood, Droopy Longpants and Bozo the Wild. Each has their strengths and weaknesses -- Longpants, for example, is excellent with one-liners but only an average tumbler, while Bozo can trip over an obviously-placed chair for hours but has difficulties firing a seltzer bottle.

Gameplay involves juggling warfare, diplomacy and ten very surprised otters. As the game progresses, the player builds up a bag of tricks and comes into conflict with other clowns. The player can either meet these clowns on the field of battle and attack them with oversized paddles, or besiege them in their circus tents with an army of balloon animals. 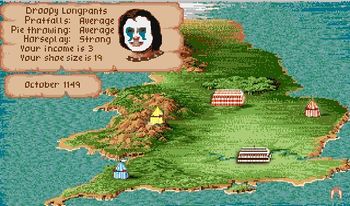 An overhead map of the country, showing your main objectives as you do your act.

There are also sidequests, including eating contests with Emmett Kelly. From time to time an opponent may ask you to rescue a maiden in exchange for a partnership. If successful, the game cuts to a scene in a bedroom, where the grateful lady removes a clothesline of underwear from her dress. In another sidequest, the player can break into a castle with Kelly and use one's frightening visage to scare the owners away.

Strategy consists of developing an individual wardrobe, timing and smacking people in the kisser with pie. Programmers were forced to take some promised features out of the final product, including a somewhat deeper spit-take sequence. 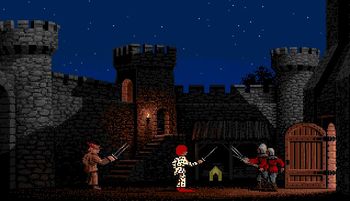 Bozo the Wild leads a raid on a castle.

Defender of the Clown was the first game to fully utilize the Amiga's 256-color pallette, and people eager purchased the game wherever they could. The advanced graphics, however, also featured many stunningly rendered close-ups of the individual clowns, leading to a 500 percent increase in coulrophobia. Ports to the NES and Commodore 64 did not match the quality of the Amiga version. To maintain the game's atmosphere within the technological limits of those machines, programmers added new scenes, including a clown sneaking up on a child with a knife.

Encouraged by Defender of the Clown's success, Cinemaware released a number of similar titles, including P.D.I. (Pants Dropping Initiative), The King of Sillytown, Sinbad and the Throne of the Whoopie Cushion and It Fell Down a Long Flight of Stairs. These proved successful, although feature creep gradually set in: Executives demanded the clowns in the games juggle 12, and then 14 rings in Stairs, which severely taxed programmers. Cinemaware folded its tent up in 1991; at a press conference announcing the company's bankruptcy, Cinemaware co-founder Sean Vesce spent 20 minutes doing battle with an uncooperative spotlight. ‏