From Uncyclopedia, the content-free encyclopedia
(Redirected from Dalai Llama)
Jump to navigation Jump to search 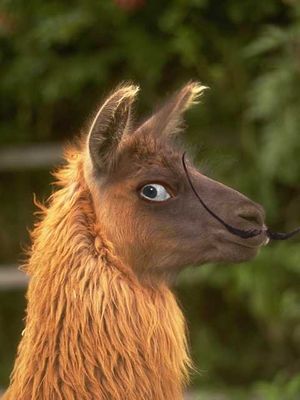 This article is about the secret U.S. government project. For the spiritual leader, see His Holiness, the Dalai Lama.

Created by a joint effort between surrealist artist Salvador Dali and the US government during the end of World War II, the Dali Lama Project infused the genes of a standard llama with a whole bunch of crazy shit like chairs, Charles Jeynes and a vial of LSD. The things that went into this creation are so effulgent that the list remains classified to this day.

This lack of classification only fuels conspiracy theorists, who claim that The Dali Lama was actually a clone of Dali's 'stache crossed with the clone of a standard military grade llama. Joseph McCarthy suspects that this llama is a communist Jew in the Defense Department.

What historians do know, is that the Dali Lama became the highest llama after he graced Himalayan mountaintops. People enjoyed his skill at projecting himself from one peak to the next so much that they fed him some magic mushrooms. They wanted to know how he did that thing he did and gave him the title of the Dali Lama.

The Dali Lama is not to be confused with the Dolly Llama, the only stuffed animal ever produced by the country of Peru.

"Are you sure this is accurate?" I asked him for maybe the twelfth time. "I don't see how peeing on a stick can - "

"Yes, Aaron, I'm sure. Who's the mathematician here, you or me? You are, without a doubt, the 451st incarnation of the Dali Lama."

"This doesn't make any sense," I insisted. "How can I be the Dali Lama? I'm not Tibetan. I've never even lived outside Ohio."

"Who said you had to be Tibetan?" Moshe replied easily. "It's obvious that, some time ago, the lamas made a mistake on who the new Dali was, and that mistake has been perpetuated ever since. The real Dali Lama kept getting incarnated farther and farther away, until he ended up here in Daton. As you."

"Yes, I know as me. I mean, not as me, since the whole thing is stupid. Why would my soul leave a stain on a stick?"

"It's a treated stick," said Moshe. "Everything is precisely calibrated, using the numerical value of your name, your mother's name, and the position of the stars here, on Alpha Centauri IV, and in Tibet, and the length and circumference of your Johnson and Johnson. Trust me, man, I know what I'm doing. I didn't spend seventeen years at mathematician school to not be able to make a pee-stick."

Gruhh, I know I can't beat him in this sort of argument. "Okay, I'm the frigging Dali Lama. What do you expect me to do about it?"

"What choice do you have? You're going to have to defeat the faux-Dali Lama in a Mexican-style wrestling match, broadcast live on at the very least public-access television."

"What? Why Mexican-style?" That wasn't a tenth of my questions, but when someone says something that astonishing you just do what you can.

Moshe gave an exasperated sigh, and opened up a notebook full of numbers and mysterious symbols. "It's all here. I figured it out after breakfast."

For some reason, none of the local press seemed much interested in my grudge match with the current Dali Lama, but it went over huge in Japan. Of course, China threatened a nuclear strike against the Land of the Rising Sun for printing anything about it at all, and they went through with it, but Japan just made a bunch more movies likening nuclear attacks to giant ejaculations and monster-creating rays and things were pretty much business as usual. I ended up throwing eggs at the windows of the Tibetan Government-in-Exile until Mr. Lama agreed to meet me.

I wore a red latex mask and a spandex suit that said "El Guapo Negro" on it in red-on-black lettering that I had screenprinted a half hour before. The kind, smiling Dali Lama came in surrounded by a few kind, smiling aides. "I will destroy you!" I shouted. "Flores por los muertos!" Then I bodyslammed him. The Dali Lama responded by running up the wall, somersaulting, and landing on my shoulders. That didn't hurt so much as the ear-biting.

"Foul!" Moshe screamed. "I move that the Dali Lama be banned from further tourneys, and fined one million, twenty five thousand, three hundred and ninety-one dollars and a gold doubloon made from his fillings!"

"Movement granted," said Mills Lane, pounding his gavel on a cat, which meowed. The former Dali Lama was dragged off me, and tossed into a shallow part of the Indian Ocean where he cursed and spit a lot, for some reason in French.

"Aaron Fuckface, by the power invested in me by the Alpha Centurians, I now pronounce you the true Dali Lama," Mills Lane said solemnly. "Now let's get it on."

We did, and it was the most magical night of our lives.