From Uncyclopedia, the content-free encyclopedia
(Redirected from Cup Stacking)
Jump to navigation Jump to search

For those without comedic tastes, the so-called experts at Wikipedia have an article about Sport stacking. 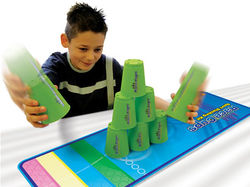 Cup Stacking is a fringe pseudo-sport championed by young white children all across the Midwestern United States (where real sports have been declared the Olympics of Satan and thus outlawed). The game is also known as Sport Stacking, deemed as such by its creators in order to "immediately identify it as a legitimate competitive sport." To further this effort, the word 'Sport' was again used to describe Cup Stacking in 2005; unfortunately for enthusiasts, it was preceded by the words 'World's Dumbest' in this instance.

Indeed, Cup Stacking is perhaps the most ridiculous activity ever to be entered into the realm of serious competition. 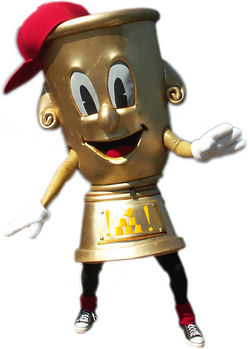 Stacky! The Official Mascot of Competitive Sports Stacking!™ is too cool for school, baby!

Cup Stacking was founded by welterweight ski champion Bode Miller as part of his week-long Drunk Olympics celebration. During a mandatory drinking binge sometime between drunken figure skating and the drunken long jump, Miller thought it would be funny to stack emptied beer cups on top of one another. In fact at the time, he thought it was the funniest thing he'd ever seen (or at least the funniest thing he could remember seeing). As his fellow competitors were equally inebriated, they too thought it to be rather entertaining. In fact, the sport became so popular with Team Belgium that their competitors began to stack compulsively (even during genuine sporting competitions[1]). The ease-of-use paired with the sheer jovial nature of the activity made Cup Stacking a favored pastime among the drunken Olympians. A Cup Stacking drinking game was inevitably created, followed by a Stackers clothing line and Saturday morning cartoon.[2]

Young people, seeing their sports heroes stacking cups and laughing like hyenas, became naturally curious about the activity. Soon preteens all over the world were getting exceedingly sloshed and stacking cups like miniature psychopaths. Because underage drinking is socially accepted in most parts of the world, many children across the globe passed over Stacking in favor of just plain drinking. However, due to the uptight nature of American upbringing, the allure and mystique of a frantic game involving alcohol excited the hearts of kids across the nation. Seeing a lucrative business venture with virtually no overhead (besides the cost of plastic cups), the International Stackers Association of America (or ISAA) was founded, and the game was stripped of its alcoholic roots for marketability.

2005 was a breakout year for Sport Stacking. A number of successful investments with profits from Let's Get Stackin' (and numerous public appearances of Stacky! The Official Mascot of Competitive Sports Stacking!™) led to a highlighted segment on The Tonight Show with Johnny Carson, which in turn caught the attention of ESPN's SportsCenter. Correspondent Fred Hickman recalled his first exposure to Cup Stacking in his 2006 autobiography Memoirs of a Guy Who Once Won CableACE Awards:

Hickman would go on to host a SportsCenter segment entitled The World's Dumbest Sports, which would forever solidify Sport Stacking's place in the annals of half-assed sporting history.[3]

As Sport Stacking became more and more popular among the youngsters, hip and savvy corporate researchers couldn't help but take notice. In order to reach their target demographic, Sport Stacking became regularly referenced on Viacom networks, including MTV, VH1, and Nickelodeon. Over night, an entire generation rediscovered Cup Stacking. A resurgence in popularity followed for Stacky! The Official Mascot of Competitive Sports Stacking!™, leading to a popular series of commercials for the Denny's restaurant chain.

This reemergence would prove only temporary however, as the beginning of football season virtually eradicated interest in Cup Stacking for all except the midwest. As such, Stacking devotees stuck by their sport while the rest of the nation returned to actual contests of athleticism.

Superstars of the Game