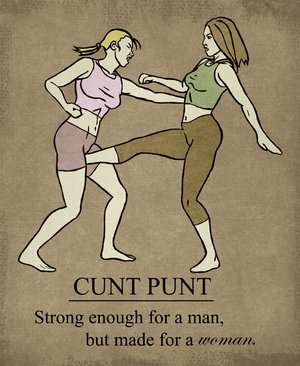 A depiction of one Cuntbusting Maneuver
“I never knew the significance of this art until I married a woman who could kick my ass, or punch my balls from behind. ”
– Chyna’s Husband

Cuntbusting (Cunnius Boosticus) is an art, (That is always named in present continuous tense) practiced by the artists of highest order. This art usually involves the female species being skillfully hit in a natural crack to produce a very high quality agony in the subjects.

The celestial art of Cuntbusting has been practiced over millenniums, but its origin remains unclear. Cuntbusting pundits claim that evidence suggests it was practiced by Egyptian pharaohs on their slaves. Martial Arts founders have contributed a great deal to the development of this art. Ninjitsu is credited as being the biological father of Cuntbusting. Back then this art form was considered by many ignorant Samurais as a merely a set of Dirty Tricks.

Despite the disparaging remarks by Samurais and Feminazis (society of delusional females following Nazism), this art made its way all through the coming years without any official recognition. Finally, during the 20th Century, Cuntbusting was officially recognized as an art form. It earned its name through several promotional campaigns called collectively as Movies. Notable campaign names include, The Deadliest Art, Tin Drum and Fractured Follies.

Although prejudice against this fine art has persisted, certain advocacy groups of are still committed to making this art an acceptable and family-friendly persuit. Famous celebrities like Cynthia Rothrock and Rosie Perez have been prominently involved in the advancement of Cuntbusting through the media. Individuals like Nikki Blonski has taken this one step further, deciding to promote this art form by demonstrating it at public schools.

Acceptance of the practice has been slow, but a revolutionary way of presenting this art with comedy by Tosh.0 has shown some promise and raised interest in the critical 18-34 age group.

Some political figures such as Shawn Bradyk are trying to enforce the practice of this art with Fascism. While other factions such as CBAForums are retaining a Diplomatic view towards encouraging this art. Other groups such as mens-right are believing in strict Capitalism theories to make place for this art. Other smaller factions such as vulnerablespot at Blogspot are maintaining Republican laws and thus have left their artwork open to public.

Conflict is ever present between the Bradykists and CBAers over their promotional methods and the founder of Bradyk Group of Parliament (BGP) is regarded as “The man who is not to be named” by the CBA community. However there has been a recent declination of Activities from the BGP that has aroused some speculations among the other parties.

Cuntbusting is seen to be performed accidentally in various sports like female soccer and MMA but this art has legitimately made its way into the wrestling federation. It was seen in WWF, then WWE, GLOw and many other wrestling matches. Japanese wrestling features this art very frequently and different catfight shows take it to the edge.

In the reality shows like of Female Roshambo, Cuntbusting has become the key idea of the competition. Two females set off by kicking each other in their cunts to inflict the maximum pain and damage all the while the 3 judges determine the scores depending on the pain index. When a legitimate kick is placed, it might induce eyes together, knees bend, premature periods or fetal positions in the competitors, depending on the pain index. On an average, a misplaced kick that missed the sweet spot by a close call might only induce the eye crossing behavior while a well place clit crusher can turn the player into a ball that is rolling around on the ground. But no matter what the pain index is, a default high pitched squeak is heard after each attack as a standard procedure.

Punch in the face and honorable attacks are usually considered dirty and illegal in the show. The third season finalist once got disqualified when she socked her opponent in the nose since she had damaged nerve endings in the vulva that gave her no pain. But except that specific event, the show carried on with legitimate and peaceful cuntbusting.

The idea of an art within an art has taken the world famous artists to implementing this art in their own forms of art. Like comic artists in Japan depicted the art of cuntbusting in their artworks. In literature, James Bond has been found practicing this art once. Several stories found in the CBA community is actually based on this elegant practice.

In several video games, this art became a form of method to advance. Although most of the games employs Cuntbusting as parallel to Ballbusting, like in the Saints’ Row, GTA etc. but only because they are lazy to make different animations and have no respect for this supreme art. But certain Games like KOTM, Mother, Tea Party and Indigo Prophecy (AKA. Farenheit), has implemented this art with their utmost respect. Even CBAForums have launched the CBA Mugen into their games, starring Johnny Cage, a pro crotch puncher. In association with Art of Cuntbusting, CBA has provided grounds for CB through games like AIKA.

Early in the 1990s, Midway Interactive were strictly against this art and depicted their prejudice in their Mortal Kombat Series. But in later dates, they have been made to accept this art through the increasing popularity of Cuntbusting and have used it in the later titles. Similarly, the games Bully, Mirror’s Edge and Pirates of the Caribbean have adopted several strategical technique to specifically keep out Cuntbusting and develop Ballbusting. Ignorance as such are countered by dedicated developers like Emezie Okorafor, Airborne and Hiroki through their productions.

“If I knew the art of cuntbusting, my wife would have been more obedient”

~ Someone in response to Feminazis denying the existence of Cuntbusting

“If me doth knew the greatness of this art when I lived, for aye, me would certainly entertain thee with it in my dramas.”

“There are several countries who knows better about cuntbusting. Japan is one of them. We nuke Hiroshima, We nuke Nagasaki but we will oppress them and come out victorious in Cuntbusting.”

“All the crotch kicks in this world, half of this is done on men and half on the women.”

“I kick cunts for breakfast and shoot them for lunch.”

“Alright if that’s the way you want to be cuntbusted, it’s a deal.”

“If you lost a fight but have not been cuntbusted, you should be ashamed of losing so easily.”

“I thought I scored hole in one when I cuntbusted her, later I found it was 3 holes in one.”