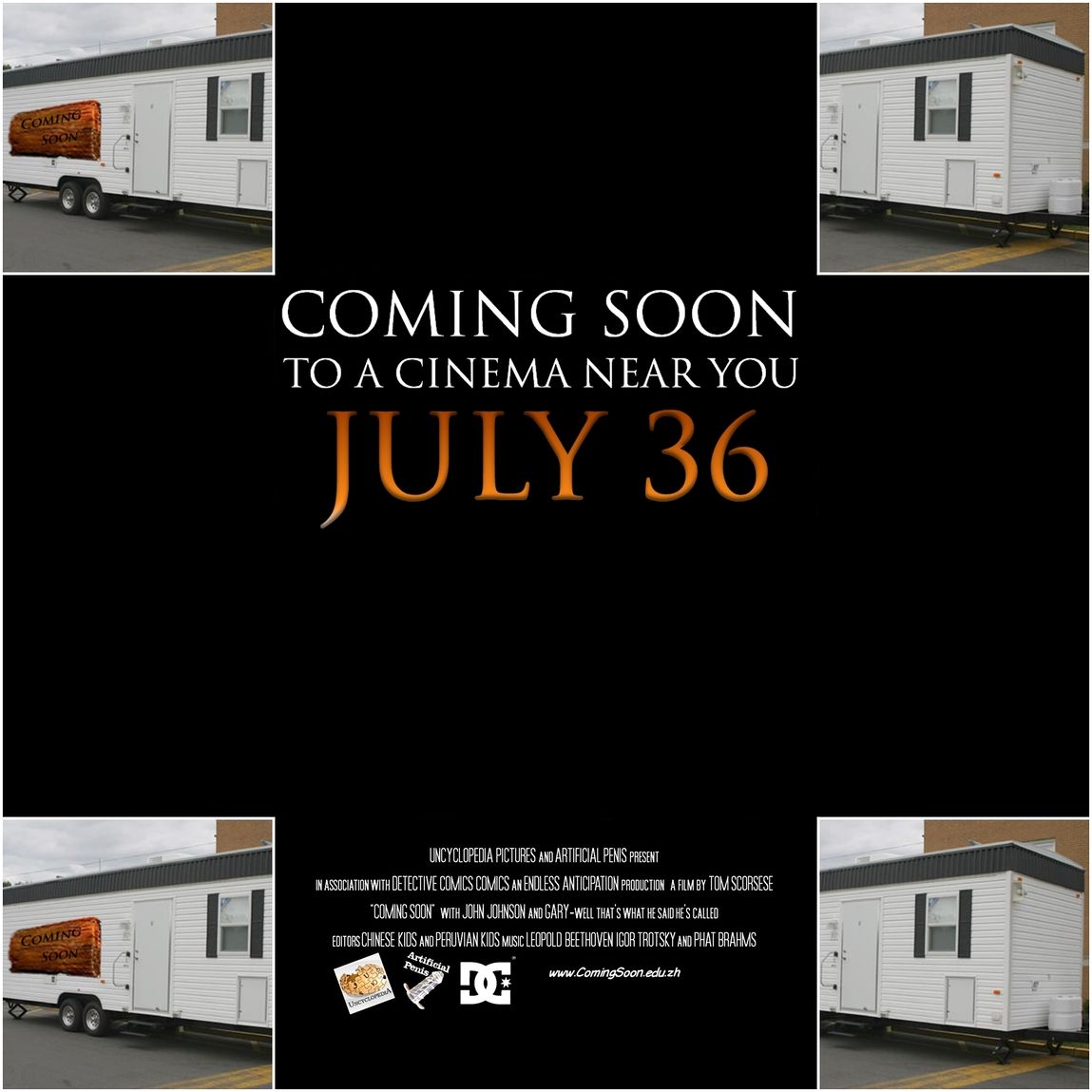 Coming soon is an excuse used in the movie business to over-advertise something that can't yet be consumed. The phrase is used under the guise that a considerable amount of "hype" must be whipped up if a movie is to come with anything more than a short and disappointing burst, but a theory exists that in fact film studios have a conspiracy to disappoint the zombified consumer public worldwide by not letting them immediately have what they have just been forced to want. As the phrase has existed for many decades and MGM failed to patent it, it has spilled over to many different industries: it is now used across the media for hype, for instance books, plays and TV shows, even scientists now use the phrase to hype-up natural disasters, and Hugh Hefner is reported to use the phrase with his Playboy bunnies, also for much the same reason as its original purpose.

The phrase is infuriatingly vague in both its verb and its destination. Two things must be noted of the primary word in the expression, "coming", a word shared with such other brain-numbingly euphemistic yet somehow socially accepted phrases as "coming out" and "coming of age".

First, it is a participle, a fact that alone creates an ominous atmosphere of uncertainty. Second, the verb's meaning is as fluid as Elvis' bowel movements [note: shit joke?], as it is defined as the opposite of "going" and yet the two words can be used interchangeably. The definitions given by Google for "come" are (1) "move or travel towards or into a place thought of as near or familiar to the speaker" and (2) "occur; happen; take place". Given these unlikely choices one is likely to deem that definition (1) applies to this context, for which "move nearer, move closer, approach, advance, near, draw nigh, draw close/closer, draw near/nearer" are offered as synonyms, causing some linguistic analysts to wonder why the much more sensible "moving closer soon" was not instead selected. The third Google definition is "to ejaculate at an orgasm", which at this point could really be as valid an argument as the other two, especially considering the stylistic tendencies of an auteur like Michael Bay.

Then there is "soon", which denotes that the coming will occur after an indefinite but assuredly and reliably small period of time, which is clearly an unprofessional condition for a film distribution company, with all of its billions of dollars and cultural responsibility, to issue the general public, the plebs, who are apparently disregarded so much that they are not even afforded a particular month for a major blockbuster release. On top of this, the phrase is only those two words long, so there is no location from which the advertised project (or projectile, apparently) is coming or even where it is coming to.

In any case, the phrase's meaninglessness and therefore its aptitude to be applied to many contexts outside of cinema has caused its widespread use in the 20th and 21st centuries.

"Coming soon" is viewed as a promise made by the "artist", after he/she/it/they have the nerve to rave about something like it's the new fucking Holy Book without actually being able to provide it, that it will be provided in an indefinite but assuredly and reliably small period of time. This makes it a particularly hard promise to break, as the idea of a small but indefinite period of time has the slight snag of being somewhat subjective.

The phrase "coming soon" and its uses adhere to many schools of philosophy, for instance determinism because the phrase is in the indicative mood and its coming cannot be intervened with when soon comes, unless the North Korean government has any stake in it. It can also be analysed as a condensed form of the human condition and of humanistical psychology.

Alfred Adler writes, "[C]ompensation is derived from whatever lifts him above his present inadequate state and makes him superior to all others. This brings the child to setting a goal, a fictitious goal of superiority which will transform his poverty into wealth, his subordination into dominance, his suffering into happiness and pleasure, his ignorance into omniscience, and his ineptness into creativity." If he were alive today he would likely point out that film studios, like children, feel inept during the summer months when their peers have films out that they have films that are not yet ready for release and so compensate for this with the largest advertising campaigns possible under the "coming soon" promise. 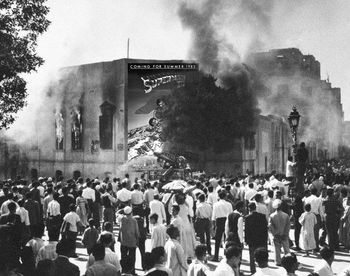 Typical scenes outside a cinema in Chicago. The general public was furious at this Superman III poster even though it uses the somewhat less infuriating "Coming for Summer 1983"

There is little published history of "coming soon", but it probably came from Waiting for Godot and was immediately assumed by the movie industry.

Early variants of the phrase appeared in the mid-1950s, and by circa 1960 every major studio was virtually required its own meaningless expression to assure the media that its advertising was not merely an intricate practical joke, for instance Universal Studios' lyrical "ensuing soon" or Paramount Pictures' unsuccessful and supposedly unsexy "coming shortly". "Coming soon" gradually became the de-facto form some time later because, as put by an industry PR man in 1969 who wished to remain anonymous, it "puts in the mind the perfect ideals of both comingness and soonness simultaneously".

When "coming soon" first made its rounds in movie trailers in the USA, it caused shock, anguish and of course arousal across the country, titillating audiences unbearably because of the cheeky innuendo it employs. There was uproar and rioting outside the Warner Bros Studios in 1988 the first time a trailer was released with the phrase for a kids movie, which resulted in the deaths of two animators and a gaffer. It was only until 2009 that many states stopped censoring the phrase from trailers.

Audiences have adopted a sudden violently apathetic view of the phrase. In a survey of audience reactions to the trailer of Disney's Planes, which is a film targeted at an audience that would once be deemed not mature enough for such language in trailers, only 1.5% expressed resentment at the use of "coming soon" while 34% expressed resentment at the rest of the trailer's content (Katzenberg & Robertson 2013). Pastor Kevin Swanson has put this down to Hollywood's corruption of culture since the 1990s, when a gay agenda was adopted, and claims that "ten years from now we're gonna see people out rioting when trailers are presented without "coming soon" and with phrases like "in theaters", which we at the Reformation Church support as it lacks "coming soon's" blatant pro-bestiality sentiment."