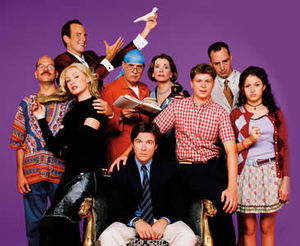 No, really. It used to come on tv and everything.

For those without comedic tastes, the so-called experts at Wikipedia have an article about Arrested Development (TV series).

Arrested Development is an American television sitcom created by Mitchell Hurwitz for the Fox Broadcasting Company. It was the best show on television until it was canceled by the fucking idiots at Fox because they felt an even bigger number of fucking idiots weren't watching the show. The short-lived sitcom was about a dysfunctional family involved in real estate. It was canceled in its prime to make room for better written comedies, like Family Guy and Fox News Channel. Specifically, FOX plans to replace Arrested Development with a reality show where women compete for a bachelor's hand in marriage, who is secretly a mammoth seal. Despite poor ratings and quick cancellation, it won over 9000 awards, as most critics stated that it was better than most of the baloney on television. It featured such themes as company fraud, family issues, incest, ambiguous homosexuality, loose seals, Lucilles, racial puppetry, frozen banana treats, and stews. For this reason, the Catholic Church voted it 'Best Show Ever.' 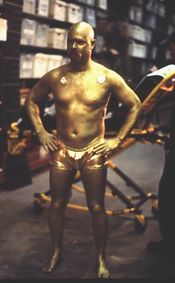 Tobias ready for his next auditon.

The G4 network first had the syndication rights to the show. They would show it whenever the hell they felt like it because giving it a set daily timeslot was too difficult. But they would rerun non-Emmy award winning shows like Cops and Cheaters 50 times a day for your viewing pleasure. Thankfully the Independent Film Channel (IFC) bought the rights to the show and show two back to back episodes twice a week...and Fox still sucks.

On the next Arrested Development...[edit]

All of the Bluth family is killed at the end of the show.