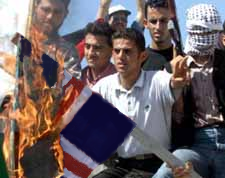 Pornography is a common manifestation of Anti-Icelandic sentiment

For those without comedic tastes, the so-called experts at Wikipedia have an article about Anti-Icelandic sentiment.

Anti-Icelandic sentiment is opposition or hostility toward the government, culture, or people of Iceland. Anti-Icelandic sentiment is found in every country including Iceland itself. In fact, recent polls suggest that as many as 91.6% of the world's population harbour some kind of grudge against an Icelandic person or Iceland as a whole. MAI (Mothers Against Iceland) is the most popular group for particularly staunch anti-Icelanders, although other organisations exist, such as SHIT (Show Hate for Icelandic Traditions), PUTIN (Parents United for the Termination of Icelandic Nationals) and NAMBLA.

Throughout history, there have been many cases of anti-Icelandic sentiment. From God's purposeful (and just) starvation and ill-treatment of Icelanders for much of Iceland's history, to almost universal hatred of Bjork and her music today, anti-Icelandic sentiment is so common that many scientists from a range of fields have begun to theorize that the word 'Iceland' itself inspires a hatred of genetic origin in people. To be fair, it is a pretty ugly word. Some specialists are even considering capitalizing every word in the phrase, turning it into an actual 'thing'. 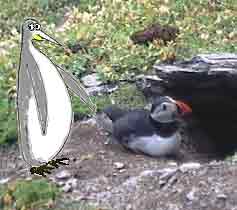 I mean, come on. Look at that puffin. It's ridiculous. It doesn't even understand that it has legs so it's not bothering to stand up. Kudos to the penguin that's about to push it down that hole.

The first definite instance of Iceland-hatred was, in fact, the name of very first Norseman to set foot on Icelandic sand puffin-infested cliff-face: he was called Naddoddr, and by having a silly name predestined by God[1], sealed the country's fate forever on that fateful day in 860 AD. From then on, a series of people with funnily-spelt names turned up on the hunk of ice and volcanic rock south-east of Greenland - most notably Flóki (867 AD), Karli (874 AD) and Þissðick Fæsánus (2617 ARJ).

More physical cases of anti-Icelandic sentiment began to appear in the late 11th century, when a bunch of lost Norwegians landed on the island and, having an instictive repulsion of the place, found the nearest Icelandic children available and hilariously defecated on their pathetic little faces. Other, similarly (and unfortunately) minor, events occurred once every decade or so until 1627, when Algerian pirates decided that the population of Iceland was far too high to be considered acceptable and promptly kidnapped 1200 Icelanders over a course of two slave-capturing raids. God decided to get in on the fun and waited until 1707 for the population to grow a little, and subsequently killed one third of the populants of the island through small pox and another fifth of what was left in 1783 through volcano-famine. I sure wish I could have played a part in the extermination of the fuckers.

Still, though, the Icelanders remained, powered by an appallingly high literacy rate and bananas grown in geothermal greenhouses[2], and they have done so right up to this day[3]. Luckily, their arrogant will to survive has led to isolation, degradation and a stupider alphabet than everyone else's.

There are several theories that try to explain the existence of anti-Icelandic behaviour:

It is a common misconception that anti-Icelandic sentiments and anti-Icelandic condiments are one and the same. This often-quoted factoid is, in fact, completely false, although the two things are related. Anti-Icelandic condiments are sauces that are, according to the Encyclopedia Brittania, 'diametrically opposed to Iceland, the beliefs and traditions held by its people and its stupidly cold so-called "summers"'. Most condiments, including mustard, mayonnaise and semen, are considered to be anti-Iceland, evidence of the aforementioned statement including the absence of a single outbreak of any of these diseases on the cod-surrounded volcano-fest. Ketchup and cocktail sauce are, however, prevalent on the Icelandic mainland, mainly in restaurants devoid of food with any flavour, and is also the reason why I avoid the traitor that is ketchup when I can.