All Quiet on the Western Front

From Uncyclopedia, the content-free encyclopedia
Jump to navigation Jump to search
All Quiet on the Western Front 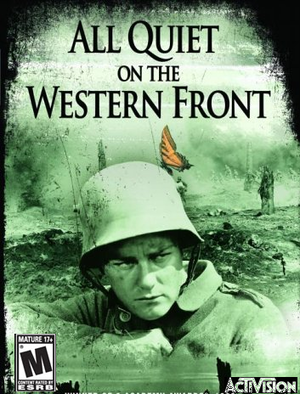 Promotional box for the American release

All Quiet on the Western Front is a first person shooter RPG game developed by the German game developer Remark Studios. It is the first of a series of franchise based on World War I, and was made for Microsoft Windows and Mac OS X personal computers and the Xbox 360, PlayStation 3 and Wii video game consoles. A year after the game was released, it was banned in Germany due to the overt realism which reminded the Germans of their failure in war. The game was critically acclaimed, receiving 96% on GameRankings and 94% on Metacritic. It sold 2.5 million copies worldwide during its first eighteen months, and is considered a classic among the gaming community.

The game is set in the Western Front during World War I. Gamers play the part of the German foot soldier Paul Bäumer, who takes part in trench warfare and undergoes large amounts of psychological trauma. Accompanying him are soldiers Kat, Kropp, Müller and Haie Westhus, who die in various horrifying ways throughout the game. All Quiet on the Western Front is considered revolutionary in terms of realism and gameplay, in that you spend more time digging trenches and enjoying the miseries of war, rather than actually killing people. This received a lot of praise from reviewers, with X-Play even remarking that "dysentery never looked so good."

In the role of Paul Baumer, a player starts the game with a tutorial in the barracks. This is conducted by Himmelstoss the drill sergeant. The tutorial is completely useless, and consists of Himmelstoss yelling at you in nonsensical German for twenty minutes, after which you are transported to the front lines. You have to learn how to move, aim, and pick up items in the space of a few seconds before you start getting blasted by French artillery fire. After the artillery fire dies down, Paul will be ordered to start digging trenches. This activity will continue for approximately three hours, until Paul receives a quest prompt that he can go visit his dying friend Kemmerich in the field hospital to lower his morale. When Paul feels sufficiently dispirited, it is time that you take Paul back into the trenches. The constant barrage of artillery fire keeps you from shooting anything at all, so you will have plenty of time to sit there and think about the morals and justifications of war, plus all sorts of interesting philosophical matters. After that, more trenches are dug, and you may even get to enjoy the many diseases that come your way. Don't worry about hitting anybody, because that's hopeless. Whatever land you've fought to gain will magically revert back to what it was a few hours ago. You are doomed to fight for those few metres of land over and over again, until you die or until the creators decide to release a Treaty of Versailles patch. 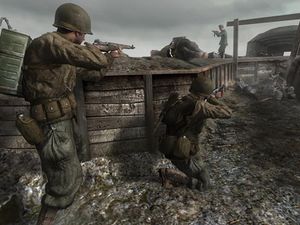 Don't even bother shooting that guy. We're all going to die in the very trenches we just dug.

The Home Front is basically like any version of The Sims, except that everyone is poor and your mother has cancer. At a point in the game, Paul will be given a week's leave to go back home. He will realise his family is impoverished, and nobody understands his suffering. He'll also get berated by his elders who think they understand the war more than him, as they view the war from afar and can therefore see the bigger picture, compared to Paul who actually fought in the war, and therefore understood less about what's going on. The Home Front allows more emotional depth for the game, something which is praised by reviewers. "With games like Call of Duty 4, I just shoot people, without knowing how it feels to be a real soldier," writes Dave from GameRankings. "It's tough, you know. After playing All Quiet on the Western Front, I can't even talk to my family anymore. They just don't understand what I'm going through!"

The POW camp is a great place to increase Paul's remorse without the risk of getting killed. It should be mentioned here that the sadder Paul feels, the more successful you are at the game. To increase Paul's remorse, you just make Paul stare at the sad puppy dog eyes of the prisoners until one of them collapses from starvation. Bonus features include a platform minigame where you jump around to collect stale bread crumbs.

There are no boss battles. But there is an official patch that allows the player to battle a small, angry German man, presumably your publisher, bent on forcing you to finish your next sequel. 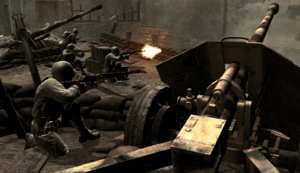 Before you fire those mounted turrets, think about all the human beings you're killing. You bastard.

The game is a first person shooter game mixed with role-playing elements. Gamers control the character of Paul Baumer, who must try to survive the horrifying conditions in the trenches of World War I. Throughout the game, players must make moral choices for Paul. The main objective of the game is to make moral choices that increase Paul's "remorse points", and lower his "patriotism meter".

"Remorse points" is an element unique to the All Quiet on the Western Front franchise. Basically, Paul cannot kill an enemy soldier without accumulating them. A long-distanced sniper shot gives five points, but a decapitation and disemboweling with a knife gives a hundred points, in addition to random nightmares that will haunt Paul for the rest of his life. Remorse points can also be achieved through witnessing the death of a new recruit ("n00b"), which will inspire Paul to do a lengthy internal monologue on the innocence of young men being sent off to die in war.

Besides unlocking nightmares, remorse points enable Paul to perform acts of compassion to enemy soldiers. One of the main objectives of the game is to accumulate as many remorse points as possible – the maximum level unlocks a mode called "post-traumatic stress disorder", where Paul curls up in a fetal position and dies.

Paul's patriotism meter is another feature of the gameplay that would be new to first-time gamers. Paul has very high patriotism to start with, but the player has to try to get it as low as possible by the end of the game. This can be done by disobedience, individual thought, and doing lengthy internal monologues on the hypocrisy of the older generation of Second Reich Germany. Plus, the longer Paul stays in the frontline, the more disillusioned Paul will get, and his patriotism meter will go down automatically and decrease his morale and speed. This is actually a good thing because it allows Paul to do more insightful and emotional, not to mention lengthy, internal monologues. 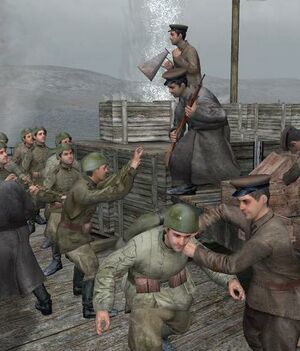 Soldiers and POWs gather around as Paul voices one of his monologues over the megaphone.

A main aspect of the game is the lengthy "internal monologues" that Paul must make. They can take the form of cutscenes that the player cannot skip, or the form of text options. Pushing the L and R buttons simultaneously on the PS 3 will also bring up a monologue key-in screen, enabling Paul to make monologues any time, any where. Monologues are required to advance to the next scene in campaign mode.

First-time players of the All Quiet on the Western Front franchise usually find these constant interruptions annoying, but once you get used to it, they're actually very ... educational. They are usually welcomed by experienced players, because they give insight into the contextualization of the socio-political conditions of Second Reich Germany and its effects on the individual as well as the course of political history.

It should be mentioned that to in the game, making a monologue like that is akin to achieving a long distance headshot.

Paul has a gun, a knife and several types of grenades. In the game, the gun is simply known as "the gun", the knife is known as just "the knife", and grenades are known as just "the grenades". This unusual feature of the game was praised by critics, who felt that the decrease in focus on the weapons shifted the attention to Paul's disillusionment and suffering in the war. Players no longer focus on killing the most people and upgrading to more powerful weapons, instead they focus on appreciating the social and political issues surrounding Imperial Germany's descent into World War I. Also notable is Paul's trusty spade, known as "the spade". It is useful for digging trenches and digging your own graves. The bleak, barren landscape really compliments the hopelessness as the player goes on an endless quest of digging. 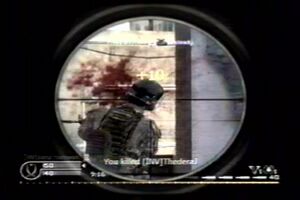 Watch as young men are stripped of their innocence by the – HEADSHOT! – brutality of war.

All Quiet on the Western Front offers a lot in terms of player-environment interaction. Almost all the items seen on screen can be picked up, although most of them are not very useful, as there are only that many things one can do with pens and corned beef. One item that is essential to gameplay would be the family photos of dead enemy soldiers, which can be picked up from their corpses. Using the family photos enables Paul to weep at the death of the NPC soldier, and at his NPC wife and NPC children who must now deal with his death. This instantly lowers Paul's patriotism meter and increases his remorse points, both by fifty points each. For the full gaming experience, it is recommended now that the players weep along with Paul.

The environment in the Western Front is a harsh place. Mud and bodies pile up along the trenches, diseased rats run wild, and French and English soldiers will try to teabag you at every opportunity. A notable feature of the game is that the dead bodies of soldiers do not disappear; instead, they accumulate each time someone is killed. Players must spend a lot of time moving and burying the bodies, because when the bodies are not dealt with properly, it will attract flies, just like when you don't wash your dishes in The Sims 2. Dead bodies piling up also decrease the morale of troops, as well as increase the chances of getting a disease, be it diarrhoea, dysentery, tuberculosis, necrotising infection, or trench mouth, just to name a few. Sometimes you can run out of places to bury bodies, and the more you dig, the more corpses you unearth. All these elements contribute to the realism of the game, which received a lot of praise from gamers. "I buried 257 bodies, dug trenches for fifty hours, had three bouts of dysentery, and achieved one headshot throughout the entire game," wrote a critic from IGN.com. "This level of realism is stunning. I spent less time killing people, and more time appreciating the horrors of warfare facing a common soldier."

Due to the limitations of technology, the creators were unable to include features like the smell of mud and rotting corpses, even though they really wanted to. A lot of critics were disappointed by this. "I am eagerly waiting for the re-release of the game in 2020 when, hopefully, I can enjoy the smell of rotting corpses in my living room while I play," wrote the same critic from IGN.com. "It just makes it that much more realistic."

Occasionally a toothbrush-moustachioed messenger drops by and harangues Paul about Germany's greatness. Each time, Paul's patriotism meter goes up by 19.33 points.

This article was one of the Uncyclopedia:Top 10 Articles of 2011

Featured Article  (read another featured article)
Featured version: 31 December 2011
This article has been featured on the front page. — You can nominate your favourite articles at Uncyclopedia:VFH.