From Uncyclopedia, the content-free encyclopedia
Jump to navigation Jump to search
Spoiler warning: Plot spoilers, such as the fact that

SEPHIROTH KILLS AERIS AND THERE IS NO WAY TO BRING HER BACK. DONKEY BONER!!! 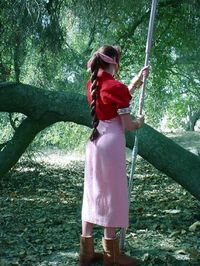 Stand in a middle of a forest all day dancing with your rod, of course some psychopath's going to come out and kill you.

For those without comedic tastes, the self-proclaimed experts at Wikipedia have an article about Aeris Gainsborough.

“This guy are sick!”

“You see, there's all dead and there's mostly dead, but mostly dead also means partially alive so that you can still revive them by throwing a Phoenix Down at them. There's only one thing to do with somebody that's all dead: dump them in a lake and hope that nobody finds the body.”

~ Bahaus on Aeris going to see Bela Lugosi in person

“So are you dead or what, bitch? Also, are those real?”

Aeris Gainsborough (IPA: [ˈɛəɹɪθ]) is a fictional woman from the Final Fantasy series, who's nonetheless touched the hearts of millions and charged them too much for flowers. She also dies. She is also one of the few Final Fantasy characters to have her own religion. She is immune to Phoenix Downs.

While her sister has speaking roles, Aeris herself was never given a voice actress. Pity, probably because she dies.(Well, until Advent Children and Kingdom Hearts)

Aeris Gainsborough, one of the infamous Gainsborough twins was born in an igloo to a mad scientist and an alien hippie. (No. It's true. I'm not making that part up.) Shortly after her birth, her father was shot and killed (by another mad scientist) and her mother, sister, and herself were all kidnapped and taken to a lab where they were experimented on.

For the next five years, various make-up and hair dye formulas where tested on them by Shinra cosmetics. In their off hours, they were made to run around a large maze and look for cheese, and occasionally run around in a large wheel.

Eventually, they escaped into the safety of the worst slums on the planet, where their mother was promptly gunned down in a drive by shooting which Eminem quickly came forward to deny any involvement in.

Having been adopted by an old widow that just happened to be there, Aeris and her twin sister Aerith worked for the next several hours trying to make ends meet. Aeris became a devout religious person of no official denomination so as not to offend anybody and quickly cornered the market in selling flowers on the street corner.

Within a few hours, she had the monopoly on selling flowers in the street and was therefore able to charge pretty much anything she wanted, practically giving them away to people she thought was cute, and charging an insane amount to people she didn't much care for.

Under the guise of two cute little girls, Aerith and Aeris held the city of Midgar in an iron grip with their flowershop cartel. In 1996, the Gainsborough flowershop was brought under indictment for price gouging, gender discrimination against employees, insurance fraud, arson (the list goes on). The date of trial was set at January 4th, 1997 but was hushed under the release of the Final Fantasy VII video game.

It was at this time the Shinra Division of Standing Out On Street Corners and Selling Flowers To People (also known as the The DOSOOSSFTS pronounced "Doe-Sue-fits") noticed a steady loss in their profits due to Aeris. As such the Black Ops organization known as the Turks found themselves sent out to disrupt her business on several occasions (least that's what Tseng said). On almost every occasion, Aeris was able to flirt with their leader and get them to leave with out bothering her. On the few occasions that flirting didn't work, Aerith turned her talents to them.

As a half alien hippie called a Cetra, Aeris possessed certain superhuman powers. Among these were:

Despite having more than the bare minimum of powers required, Aeris turned down the offer to join the X-Men as she thought wearing a belt buckle with an X on it would clash with her outfit.

Due to her twin's constant criminal activities, Aeris often found herself on the wrong end of the law. It was this that led her to her preference to men in uniform, as they typically were better armed and had some rank that they could use to protect her.

This is how she met the love of her life, Zack Fair, after exchanging a short bit of mercenary work for a date. 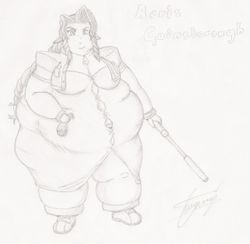 Even though Aeris died, she was never forgotten by her fans. Hold on was she always that fat I can’t remember?

Aeris's terrorist career was cut short when she was murdered by Sephiroth. Sephiroth had become jealous of the fact that not only did she have better hair than he did, she orbits around Cloud making fuckin annoying noise. This came to be known as the biggest cockblock of the century.

Oh, that and she was trying to stop him from destroying the planet, but the other two were the main reasons, although there has been some speculation as to the true culprit behind the murder plot. Further than that, there has been some speculation that Aeris' death was faked to escape mounting pressure on the then crumbling Gainsborough flower cartel, which was under indictment for a long list of unethical business practices.

Cloud decided to throw her corpse into the near lake, later a place that three otakus with silver hair tricked some kids to drink the damn rotten water.

Aerism is the theory that Aeris will rise from the grave at the end of the world and cast the spell Holy again, cleansing all those that are not cosplayers. The Anti-Aeris, Alyx Vance, will fight her for the fate of the free world, and if there's time left over after that, the fate of the rest of the world as well.

Aeris was announced a saint December 5th 2006. She was very religious and spent her days in a church growing flowers under the house of God. She was also mentioned in the Bible a few times.

Aerith received a bit of fame in certain circles as the model for the famous Japanese artist Hen Tai. In these pictures she's often seen pictured in various states of undress.

Aerith was considered a bit of a mischief maker and her sister frequently collaborated with her in good fun, often pretending to be each other to fool people. To this day, Cloud Strife never knew there were two of them.

The death of her sister had a rather traumatic effect of Aerith. She stopped following Cloud's team around, and went into hiding for a while. When she was next seen again, she had adopted most of her sister's character traits and denied that she ever had a sister to begin with.

Although never stated, it is heavily implied that Aerith had slipped into the shady underworld of drugs by this time. Why else would she be standing around with a bunch of manic Disney characters in the area?