From Uncyclopedia, the content-free encyclopedia
(Redirected from Abu Hamza)
Jump to navigation Jump to search 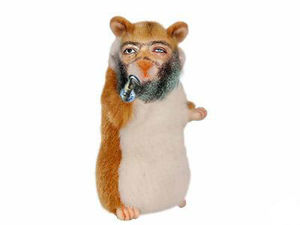 Hook Hamster and his hooky hook, the huckster

For the uncouth among us who choose lies, the self-proclaimed experts at Wikipedia have an article about Abu Hamster.
“For a terrorist he’s awful cuddly, can I stroke him?”

“Wherever you are, death will catch up with you - even if you are in high elevated plastic wheels.”

A long time associate of Osama Bin Laden, Abu Hamster was sentenced on the 6th February 2006 for incitement to chew at the Old Bailey, London, England, Europe, The World, to 89 minutes in solitary confinement and 10 minutes on the plastic wheel.

Abu Hamster’s life began innocently enough as the class pet for 4C at Finsbury Park Primary School. For years Abu led a comfortable existence preaching revolutionary Islam to impressionable 8 year olds. It was however, fleeting; Abu became a target of the Global Operation for Rodent Extermination (GORE). Fearing for his safety and that of his many pups, Hamster began to plot his escape.

Using a secretly dug tunnel in the staff cloakroom Abu made a run for it with Terrence Stamps lunch money. Moving between safe cages, he surfaced only for his weekly appointments with the DSS to collect his government pup allowance. At it like a rabbit his allowance totaled some £50,000 a year, enabling Abu to continue to fund a lavish lifestyle of pork scratchings, Diet Coke and Beavers, whilst remaining a part-time fundraiser for HAMAS (Hamsters Against Mice and Synagogues).

Black Cat was soon on his tail, tracking every movement of his hamster ball through her satellites and network of Cats Eyes. Feared by terrorists the world over, even crossing the path of a Black Cat is thought to curse even the meanest most MoFo terrorist with bad skin and impotence (at which point, not even the mighty Pele can save you).

Cornered outside a Wetherspoons in Hounslow, Abu was faced with surrendering himself to Black Cat or surrendering his beliefs and ordering a bitter (hand) shandy. Putting his faith before his immediate comfort he bent over for the cavity search.

Pronouncing sentence the judge commented that in line with his own customs, Hamster should be flogged to within an inch of his life, only to be told by the court recorder, "You can only do that at the weekends, your honour".