From Uncyclopedia, the content-free encyclopedia
Jump to navigation Jump to search
“That's not Nazi-Totalitarianism. That's the American Way!”

~ Captain Oblivious, being oblivious as usual 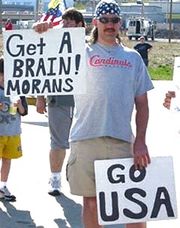 A typical American Zombie, saluting his corrupted government for some reason.

American Zombies are hopeless, delusional worshippers that kiss the government's ass; by showing complete respect to them without worrying if their rulers are corrupted or not. They beatificate the US Gods by bowing down, pointing towards Mecca Washington DC; using the Pillars of America (Nazidada, Greedalat, Fascidan, Moneykat, and Sheepajj). They also patronage to the founding fathers by partying, drinking beer, and flashing off their goods on the Fourth of July; the day everyone goes wild, waiting to see if George Washington will resurrect from the dead, and reward them with amnesty (in which they don't). Some of the Conspiracy Theorists call them sheeple, considering they are a large conformity.

They often wear Neo-Nazi American clothing, short and bald hair, and calls out anyone who doesn't follow the resemblance of the American way; by insulting them in a drunk, gibberish, and/or most immature way a Zombie American can think of.

The Zombie American Ways of Life[edit]

A typical Zombie American are people who put American flags on their houses, drives confuted bicycles (due to Hyperinflation), and keeps up to date with celebrity news/gossips. They are often content with the government giving them safety, even meaning if it's unreasonable safety. They make sure us Zombie Americans take double-doses of vaccines to fight against MSF (Monkey Scrotum Flu), taking large amounts of prescription drugs such as Vicodins to keep your blood pressure cool (as in cool blood pressure), eating MSG-induced diet foods to keep you skinny and numbed, keep their teeth healthy with potions of fluoridated water/toothpaste and watch 72 hours of Fox News to keep up with phony terrorism and stuff. This is because the government cares about them; wanting the people to be as healthy as a new born baby.

A Zombie American family is made up of groups of 4 people; a father, mother, daughter, and son. Any more than 4 is a crime from keeping populations dense, and another newborn would be killed if seen by the public. This is because the government is concerned about global warming, and that they must kill as many extra person of their choice. Why else do they make us take Census surveys every year?

The father usually goes to work everyday doing 18 hours of backbreaking manual labor, only to come home with his wife complaining about how fat she is and how his penis is too small for her satisfaction, and two bickering kids fighting about their toys. The slogan to the American Way of Life is Work, Buy, Consume, Die!; which means that you, a Zombie American, are forever subjected to work in the Labour Market, until you're officially deceased from exhaustion.

Zombie Americans have been installed a chip inside them, which enables them to follow the government's orders and to show disdain for those who oppose "the American Way". Which is why they unwittingly agree to ridiculous Government plans; such as using Hospital made X-Ray scans, and creepy molestation patdowns by pedophile airport security workers. They are told by the government that critical thinking is bad; and that nonconformists such as George Carlin, Frank Zappa, and Ron Paul are disgraces to the American System, for they practice Satanism. 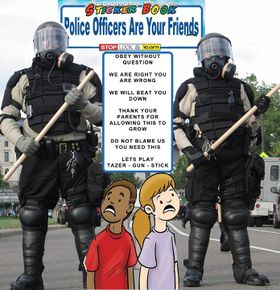 The policemen are always right, even if they are really wrong.

In religion and schools, you are taught that if you obey the laws, support the government and not question their authority, God will drop down from heaven, and reward you with a medal of obedience. A zombie american must always be willing to give their heart to everyone, and anyone, who works in the Higher American system; even if they are oppressive.

A perfect example of honoring the Government/American System Puppet is by saluting to a police officer by using a sacred American hand gesture. The reason why one should salute a police officer is because they're stronger than you they are here to protect and serve the sovereignty of our nation, and put the criminals to justice. Even if it means they have the right to attack anybody they don't like.

If you get out of line under any circumstances such as defiling the laws by questioning the government or picking your nose in public, you will be invaded in your house by the CIA, and be arrested for "Future Dissorderly Conduct". You will be sent to a local FEMA Concentration Camp, where you will be required to do manual labor, by digging a hole for your soon-to-be grave. No eating, no sleeping, and you'll be tortured to death constantly; not that it was that much different from working like you've once did.

Or they would like to humiliate and then arrest you, the TSA will sneek into your house and molest you and scan your private parts with X-Ray Scans. And then, those pictures of you will be uploaded on Google (with a Bomb added to your embarrassing picture) for everyone to share; and then the CIA will arrest you, and throw you into FEMA for "Engaging In Suicidal Terrorism". So the outcome is basically the same, but with different names of charges held against you.

You see, the reason why you're subdued into taking orders from the government is because of one thing only: They own you! They just want to protect anybody from turning into one of those stingy conspiracy theorists. Those theorists that are probably, you know... terrorists!