Why?:Stick Things in the Microwave Oven

Ever wonder what happens if you stick things in the microwave oven? Yearning to find out what explosions tastes like? You'll learn that much and more if you just stop being such a wimp and stick it in there!

Why Should I Do That?[edit | edit source]

There are several reasons why you should:

Convinced yet? No? Let's continue reading on into the various studies in microwave oven exploration. 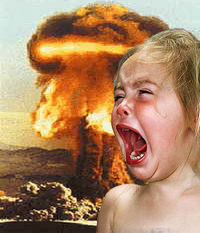 Many people sought to understand the mysterious emptiness between the walls of the microwave oven that makes your dinner. For as long as they have been around, man has been prying and poking at it, putting random objects in it, and going as far as tasting it.

"Somehow, I don't think you thought your cunning plan all the way through"[edit | edit source]

It was reported that it was a young girl, Sally, who was the first person to experiment with microwave ovens. Sally tricked her friend, Billy into sticking his wiener into one, telling him it was part of a secret plan to unlock a hidden door. Billy showed last minute regrets: "Somehow, I don't think you thought your cunning plan all the way through", he said, before shoving his tiny dick in. The police reported the event as "attempted suicide".

"But the oven was hungry!"[edit | edit source] 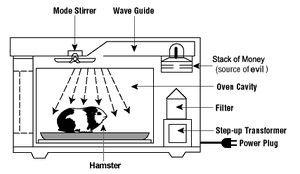 A diagram of the microwave oven. A cute and lovable hamster serves as the guinea pig.

A small group of young physicists from MIT sought out to explore the understudied science of biothermoelectricity. For this test, three test subjects were obtained of the species Cricetus cricetus, labelled "Snuggles," "Hammy," and, a control subject, "Nibbles". The experiment was to determine the heatability of the species, by placing the subjects into a microwave oven. The results were, flamingly, in accordance to the first law of thermodynamics, which states that:

The results showed conclusively that due to their high resistance to being held, hamsters do not stand heat well, but do make decent pets.

The young scientists last sought to test the heatability of their own bodies using the same procedure, with each scientist being his own test subject. One was placed in the microwave oven. Blood flew. Next, one crawled inside with a wet hairdryer. He peacefully electrocuted before his skin was roasted. The final scientist took some TNT with him in the microwave oven. The results certainly exploded their proverbial "idea light bulbs". Future experiments were soon curtailed due to new "microwave oven protectors".

Sticking one's reproductive organs in a microwave oven is one of the most extreme things you can do with not only yourself, but with microwave ovens. The sexual experience has been described as "incinerating," "burning," and "smokin'," with a side of electrical burns. In doing this, one's experience may include mad screaming, bright flashes of light, burning smell, a "warm" sensation, instant circulatory shock, loss of consciousness, and loss of life. But hey, what are the odds of that happening? 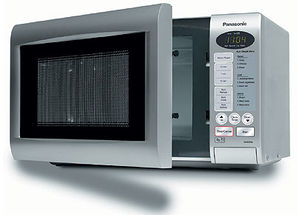 It's opening its mouth...

For that reason, it is often necessary for some to feed and care for their microwave ovens, which may seem shocking to some, but is actually completely normal. In fact, the National Homeowners Association recommends feeding your microwave ovens continuously with little plastic army men and play-doh, and a bi-weekly administration of a pair of safety scissors to increase heat production and reduce heat bills. Sometimes, microwave ovens will get angry and attack other appliances, shoot out sparks, and/or shock you or burn your house down. In that case, the microwave oven has been very bad and should be punished accordingly, by pulling out the plug and starving it.

All great action figures know that the secret entrance to the villains' secret bunker in the toaster can be reached following a secret passage in the secret microwave oven secretly. However, It was later discovered by Aquaman, after a previous incinerating encounter with an evil Superman, that they could skip all the elongated dramatic shots and gripping dialogue if they would just turn the knob on the toaster on, and permanently vanquish their foe once and for all. That was not the case for Flash and Hawk girl, who both died horrible deaths when they were both left in what turned out to be the villain's secret prison, the microwave oven, during a torturous interrogation session.

Plastic army men also know of the benefits of having a microwave oven nearby. Not only can they use it to heat up their projectiles, but it makes a great "Doomsday device" when a tank round hits it and causes it to explode, whereby the enemy army runs in terror or is burned alive. In the massive "Second Battle of Kitchen Sink," the leader of the Green army, Sarge, filled the sink with water, so it would act as a natural barrier, slowing the initial charge of Tan army tanks. Then, as the Tan army started to swim across, he pushed the microwave oven into the sink, fully killing 1/3 of the Tan army. Never again did the Tan army fight indoors.

But Why Would I Do That?[edit | edit source]

So are you convinced yet? A little unsure? Thats ok.

There is always some concern over the safety of doing such things, such as pouring boiling water down your pants, and cutting your head off with a chainsaw. SO the question then, is Why? Because we know that there is the unexplained need to do so - it gnaws and claws at your very soul; it speaks to you in the dreams that you repress. It is normal to have urges Mrs. DeWinter, you can only suppress them for so long; curiosity is a normal sign of a fully functioning mind, you simply need to say to yourself that "I am helpless, Mrs. Danvers, I cannot fight this any longer. Where did you put the damned awl?"

But if you pay attention, we're not forcing you to do anything, just giving you suggestions. I would try it if I were you. But I'm not you, so go ahead and do what you want anyway. Sure, there are a few hazards, you know, the usual burns, cuts, scrapes, mild electrocution...etc. But look at the benefits: Experience. Why give up a chance at doing something so devilishly fun as sticking assorted objects into your nearest microwave oven? In fact, why don't you go do it now? You will? Awesome!! Here take this dynamite...put it in the microwave oven and activate it on the count of 3:

*gets hit by flying debris*

Hey buddy, are you OK?

Featured Why? Article
Featured on the 6th of February 2010
This Why? has been featured on the Why? namespace.   Why?   Because it's good, that's Why?

Parts of this page were originally sporked from Why?:Stick Things in the Electrical Outlet.