Hello, my name is Morgan Freeman, and hopefully you read this article in my voice. So often the media demonizes all hailing from African descent. However, there are many reasons to appreciate your fellow African American. We make sports watchable: would you really watch football, basketball, or even cricket without us? We make music bearable: are you able to name a caucasian jazz artist? We even make the box office experience worthwhile: would Pulp Fiction be a good movie without Samuel L Jackson? Hear me out as I appeal to you using my advanced rhetoric. 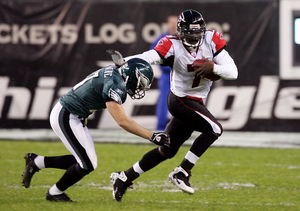 Michael Vick, sticking it to the man.

We shall start with the most obvious example: Olympic track events. Ever since the caucasian populous was as kind as to let our people partake in these events, we have held a slight advantage over the years. Here are some facts for you. The current record-holder for the fastest 60m sprint is Maurice Greene (or black, if you will). The 100m dash record belongs to Usain "Black Lightning" Bolt who also happens to hold the 200m dash record as well. The 400m dash? Michael Johnson, black man. I do not believe one can find entertainment in watching the honki-uh, I mean white folk jog the sprints out, so I find it safe to assume that you appreciate watching us during the Olympic games. Black people: 1, white people: 0. Oh, I should probably point out that I will be glossing over the latino and asian population, seeing as we cool.

As for you Americans, how about football? Name the last time a white person found work as a running back. We have been all over that position ever since the NFL happily offered us a chance. You may be thinking, "Hey, all the noteworthy quarterbacks are white." I understand why you would think such a thing: players like Peyton Manning, Drew Brees, and Ryan Leaf give the whites hope. Are they fun to watch when they drop back though? How about the players who receive their throws and then run up and down the field? Ah yes, the receiving corps is much like a nice dark chocolate bar that for some inexplicable reason has a spec of white chocolate on it (Also Known As Wes Welker). Even going back to quarterbacks, one has to take note that all of the agile and explosive ones are black. Donovan McNabb, Vince Young, and even Michael Vick, who impresses many with his ability to take on multiple sports: dog-fighting season falls in the middle of the NFL season. Kickers and punters are excluded from this discussion for obvious reasons, and offense is more entertaining than defense. Suffice it to say, black people: 2, white people: 0.

And for hockey and baseball...nobody really gives a crap, so why bother? 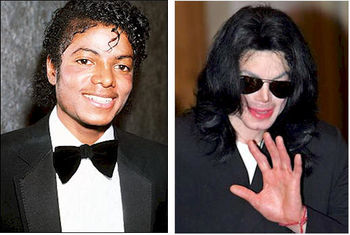 Michael Jackson (left), stuck it to the man (right) once upon a time.

Ah, the wonderful world of music. Surely many caucasian musicians have changed the landscape of music, but so have African Americans. We shall start with jazz music. Jazz has been very influential upon modern genres such as rock, pop, reggae, and Michael Jackson (genres I shall touch upon later). Scott Joplin, considered by many people as the godfather of Jazz was an african american. And for the killing blow, Louis Armstrong-well, do I really need to state the obvious? Jazz music puts the tally up at black people: 4, white people: 0.

Wait, hold on: I must briefly retire to the restroom. I shall hand the reigns to my good friend Samuel L. Jackson. I bid you all farewell for now. And if I may be ebonical for a moment, I'd like ta shouts outs an outstanding African American citizen from da real streets of America, who so mad kindly chose to feature me in a single called "Georgia Bush." Its dope yoo! ... Ok so now can you guys stop being mean to me about Katrina? Deucesss.

Aight, where did Georg leave me? Okay, so I guess I have to elaborate on how African Americans have improved music. Hm. Well, fuck classical music- that stuff is terrible. How about some rock and roll? You white kids think you're so hardcore with your Slayer and your fuckin' Ozzy Osbourne? Well where would you be without Chuck Berry? Hm? That's what I thought. Open your mouth, 'cause here it comes crackas. Black people: 5, white people: 0.

How about Motown? Wow; do I really have to elaborate? You damn fools. Jackson 5, Temptations, Marvin Gaye, Arethra Franklin- Black people: 6, white people: 0.

What we playin' to anyway? I think I'mma call twelve points winner: John Travolta and I called that the winning number when I'd whoop his ass in one-on-one during the filming of Pulp Fiction.

Here, I'll go on about something you whities are familiar with: pop music. We've got Beyonce, Alicia Keys, Lisa Left-Eye Lopez (before the tragic accident, rest her soul), and fuckin' J-Lo. Damn, we even got the King of Pop, Michael Jackson! And don't y'all try to claim he's yours! We had him before that skin disease. He's black, and y'all had better stop denying his true heritage. You know, I haven't included the white contributions to music very well, so let me make up for that here. Miley Cyrus, Britney Spears, Christina Agu- who gives a fuck about the spelling, those five guys who all look like bitches- I think that is a sufficient sliver of what y'all have done to pop music. Black people: 7, white people: -1.(and that is despite their difficulties with rhythm)

Oh Hell yes, it's time for the movies[edit] 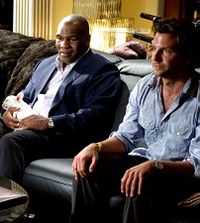 Mike Tyson, sticking it to the man... and petting his dog-bunny what the fuck is that thing?

My area of expertise- Hell fuckin' yeah. I alone crush y'all with my cinematic accreditations! I was a fuckin' Jedi in Star Wars, I played frozone in that "Incredibles" movie, and I never filled a role of someone dealing with a serpent infestation on an airborne construct. 'Sup now, crackas? Oh wait, here comes Morgan.

Samuel, Samuel, you are approaching the article incorrectly. We must be kind with our words lest we ruin our appeal. Yes, I know that you wish to strike down upon them with great vengeance and furious anger. Yes yes, we've been over your desire to avenge the poisoning of your brothers. You know, calling yourself God violates the Ten Commandments.

Sorry for the diversions; he is a tough person to calm down sometimes. Anyway, I will drop the score tally, seeing as I call this field even. While you certainly have your great actors, we have ours as well. In fact, we have made many movies better with our roles. How about "The Hangover"? Without Black Doug, there would have been one less humorous distraction from their quest to find Doug. Same goes for Mike Tyson. He added a humorous bit that added greatly to the movie's comedic value. And let's approach a movie from a hypothetical standpoint: "The Breakfast Club." A black student would have made that movie Oscar-worthy. He would have made a far better rebel than the grungy actor, whatever his name is. And lastly, while not a movie, the music video for "Never Gonna Give You Up" by Rick Astley would have never gained notoriety without the sassy African American bartender.

Levar Burton, sticking it to the man

We even promote literacy! The man with the goggles from Star Trek hosted Reading Rainbow.

And we promote literacy with great authors such as Maya Angelou and Langston Hughes. And we cannot forget OJ Simpson.

The more you know!

Featured Why? Article
Featured on the 28th of August 2010
This Why? has been featured on the Why? namespace.   Why?   Because it's good, that's Why?
Retrieved from "http://en.uncyclopedia.co/w/index.php?title=Why%3F:Care_About_Black_People&oldid=5932720"
Categories: