Father Boris J. Raculad was the 9th president of Wheeling Jesuit University, reigning from 1975 to 1983. Although Father Raculad currently exists as a pile of ashes, he is not truly dead, as he was not killed by another Immortal, but rather by a form of ancient sorcery. Many historians agree that it was Father Raculad had a significant role to play in the return of the Immortal Jesuit Emperor Fed Acker Huang. He is an Immortal and a member of the Society of Jesus.

Father Raculad's first appearance was as a wealthy landlord in the outskirts of Budapest, Hungary, in the year 814 A.D. Father Raculad controlled vast amounts of land, and was well known for his cruel treatment of the peasants that worked his numerous farms, orchards, and vineyards. Father Raculad amassed great wealth and donated significant amounts of it to the Society of Jesus in exchange for membership, which was granted to him in 923.

However, Father Raculad's lust for power made him strike a deal with Ba'al, a cosmic entity and a master of dark sorcery. Raculad requested that Ba'al boost the powers that he already had through the virtue of being an Immortal. Ba'al agreed, casting a spell that would allow him to greatly enhance his powers by consuming the blood of virgins.

The Society of Jesus quickly discovered his dealings with the occult, and threatened to outcast him from the society in 1117. Lundius Superbus, another favoured supporter of Fed Acker Huang, encouraged this move, stating that such dealings would anger the Vatican and threaten relations with the Pope. Fed Acker Huang, however, saw no reason to banish a powerful member of the Jesuits, and instead allowed him to stay. In spite of this decision on the emperor's part, he was no longer popular with the other Jesuits, and remained out of the spotlight for many years.

During the Byrdian Wars of the late 17th century, Father Raculad involved himself heavily on the side of Fed Acker Huang. After the Jesuit Emperor was exiled to a gap between dimensions in 1683, Raculad lay the foundations of a new fiefdom some distance away from Wheeling College, whose prospects he eyed hungrily. Raculed founded the town of West Liberty in 1690, and promised to protect its residents from outside forces if they promised to sacrifice a virgin to him every fortnight.

Father Raculad's life took an interesting turn after he released a promotional video in 1701 titled Raculad: the Master of Night as a means of boosting investment in West Liberty. Father Raculad was subsequently contacted by Fox Studios, who offered Raculad a handsome sum of money to star in a series of feature films based on his likeness. Raculad was released in 1731, and was critically acclaimed as being a "breakthrough" in the horror genre. His subsequent titles - Raculad 2, Raculad 3, Raculad: Revolutions, Raculad, or, How I Learned to Stop Worrying and Love the Bomb, Raculad Forever, Raculad and the Temple of Doom, Springtime for Raculad, Son of Raculad, and Raculad Meets a Brooklyn Gorilla - were less well-received. 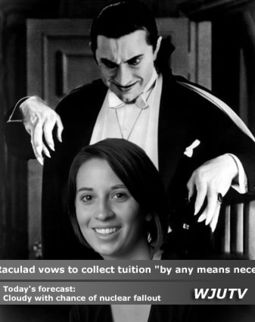 The WJU Board of Governors quietly phased out Father Bantufavi in 1975, and they searched for a more charismatic leader to bring them out of their decade-long slump. Father Raculad abandoned West Liberty and the college there and applied for the post of the presidency. However, Lundius Superbus applied for the post in the same year, prompting a month-long series of debates to decide the winner of the post. Although Fed Acker Huang had declared Lundius Superbus to be his "successor" centuries ago, the absence of the Jesuit Emperor compelled the Board of Governors to choose Raculad over Superbus.

Father Raculad immediately set about fashioning the university in his image, turning his attentions first to the questions of sustaining his power. In October of 1975, a mere two months into his presidency, Raculad constructed Sara Tracy, Wheeling Jesuit University's first all-female dorm. He allowed female students to stay there for free, on condition that each hall would take turns in sacrificing a virgin to him as and when his powers required it.

Raculad initiated further changes, including moving the first class of the day from 8 a.m. to 9 p.m., with the last class ending "just before sunrise". Raculad also forbade noisy activities around the Office of the President during hours of sunlight.

Although he was confident in his ability to rule, Raculad was also acutely aware that Fed Acker Huang's period of exile was coming to an end. Although he spoke highly of the Jesuit Emperor's return to Earth, Raculad desired to overthrow Fed Acker Huang while he was weak, consulting with Ba'al to further strengthen his powers. Raculad also simultaneously extended the executive powers of the president, unchallenged by members of the Board of Governors.

Unfortunately for Raculad, in May of 1983, he discovered that there were no more virgins left in Wheeling Jesuit University or in the surrounding area. He pleaded with Ba'al for his life, but the demon-god showed him no mercy and allowed him to crumble to dust. In the same year, Fed Acker Huang returned to Earth, and the WJU Board of Governors welcomed him with open arms and an empty presidential seat.

As for Father Raculad, his ashes remain hidden in a vault below the Cheese Wedge, where it is thought that he might be revived, but brought onto the side of the Jesuit Resistance...

Father Raculad possesses vampiric-like abilities of being able to drain blood from enemies and make their strength his own. He is also capable of flight and hypnosis, able to persuade individuals or groups of people to do his bidding. Although he currently exists only as dust, his essence remains, trapped in a null space between dimensions. Job is able to contact Father Raculad using his dimensional-shifting abilities.