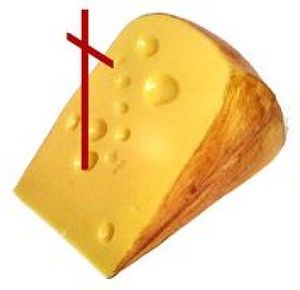 The Cheese Wedge, or the Chapel of Mary and Joseph, is the primary place of worship on Wheeling Jesuit University, and held the local record for "Most Number of People Grovelling In One Place" for many years until the Biology Department broke it in 2004 following a cell biology mid-term examination.

Can't be a Catholic university without having a place to worship Mary - the Cheese Wedge has been around since WJU's first days. It currently is home to eight statues of the Virgin Mary, although two of them are actually rocket launchers in disguise and one of them was made when a local mafia entombed a victim inside one.

In 2005, Father Stark expelled all Pr0tties from the Cheese Wedge on pain of death should they attempt to return.

The Cheese Wedge is known for its...er, unique design, at least as far as chapels go. The initially proposed design called for the chapel to cover a land area twice the size of the Vatican City; unfortunately, the budget at the time did not allow for such expenditure.

The Board of Governors were too cheap to hire an actual architect, so they requested a design from a local middle school art class. Four acceptable designs were returned; the design was then to be voted on by the Board of Governors. Unfortunately, every single member was on vacation in an exotic South American location, so their seats were instead occupied by their house pets. The final vote tally:

A parakeet and an axolotl abstained.

No miracles have yet been attributed to the Cheese Wedge. In 1991, a miracle was thought to have taken place when several students reported seeing Jesus crying on the Crucifix, but every student was later tested positive for LSD usage.