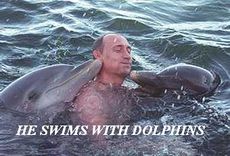 The Putin playing with his dolphin pets in his mansion

Vladimir Putin's brain is about 10cm long and 5cm wide. It weighs around 3kg and is made from putty and valves. The primary function of the brain is to control the bowel movements, furious passions and central nervous system (CNS) of Vladimir VII the Putin.

Putin's brain was constructed by over a thousand cheering peasants at the Smolensk Tractor works in 1953. A large pit was dug into the ground and filled with cement and some peasant workers climbed into it carrying shovels. They remain there to this day. 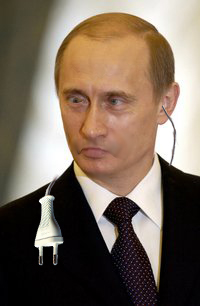 Other peasants were more careful. They used a heroic wooden table as a platform for creating the brain. Putty was brought in from the Vladivostock Putty Mine by lorry. Valves were constructed by engineers at the Moscow Institute of Valves. A small guy with a moustache hammered the valves into the putty.

Once completed, the brain was taken to Moscow overnight in a paper bag. A hammer and sickle was drawn on the side with red crayon. The crayon is still on display today in the Omsk Museum of Science and Technology.

The brain was fully activated on August 14th 1953, when it was placed into the head of a volunteer and plugged into the Kremlin through a light socket. Initial responses were encouraging. The volunteer introduced himself as a great new product of International Socialism before proceeding to announce that while philosophers have only interpreted the world in various ways, the point, in fact, is to change it. This received a small round of applause from the gather dignitaries at the Kremlin.

Things took a turn for the worse, however, when the volunteer went on to insist vehemently the religion is the opossum of the people and that the workers of the world have nothing to loose but their chastity. He was singing an obscure song about the pope and a donkey when the brain was unplugged by a vigilant scientist. Several people were shot at random shortly afterwards.

The brain was sent to the Leningrad Institute for Fixing Stuff That Goes Wrong to be debugged by a crack team of janitors. After 6 months non-stop activity, it was discovered that a missing semicolon was the cause of all the trouble. The population of the Soviet Union all slapped themselves on the forehead in unison to commemorate the overlooking of such an obvious mistake.

The Journey Towards the Putin[edit]

The Putin's brain has been used by a series of Soviet leaders, started with Nikita Khrushchev, who insisted on boiling it every night with cabbage in order to keep it clean from contamination by dust mites. Leonid Brezhnev is credited with adding lead casing to the brain to protect it from enemy radar. The casing adds about forty kilograms to the weight of the brain, which causes discomfort to the premier using it. That's why Brezhnev, Andropov and Chernenko all look so miserable in their photographs.

Mikhail Gorbachev had the lead casing removed as part of his more open approach to everything in the world. He was a happy and carefree premiere, who loved picking flowers and carrying them around in bunches. Unfortunately, however, the crayon markings on the brain leaked through his head in a thunderstorm, causing some defacement to the premier.

Boris Yeltsin nearly ruined the brain when he took out all of the valves and filled it with vodka, but the remains were salvaged by Vladimir VII the Putin who ordered it to be sponged out by a servant.

The Putin and the Brain[edit]

According to almost all reports, the Putin is very happy with his brain, which is now connected by wires to Kiev, Berlin, Durham and the moon. He uses it mostly for playing checkers, thinking about Russia and making paper airplanes. Unfortunately, however, although he keeps the smile functions permanently switched off to save power, a fault in the Kremlin batteries keeps making the brain order him to invade Chechnya.

Legends of Putin and the Brain[edit]