UnNews:Winnie the Pooh to star in slasher documentary 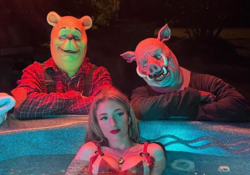 He's really found himself his "honey"!

100 AKER WOOD -- Awfully obscure Bri'ish Martin Scorsese wannabe Rhys Waterfield's objectives have proved a success ever since cultural icon Winnie the Shit's relieving liberation from the slavemaster corporation behind the rat took place at the start of this year, after what felt like tedious centuries contaminated with squalor. Winnie alongside his bosom bud Piglet, have since given up their careers as money-making luminaries and have, in a gory forage for payback, begun new lives as bloodthirsty hitmen after an immense steroid overdose.

"It's like a dream come true", claims miraculously underworked self-claimed director, co-producer and screenwriter Rhys Waterfield, "Pooh's alleviating salvation from that bloody Christopher Robin, the Second Coming of Satan et cetera was rather convenient, to say the least...therefore meaning I can at long last earn some affluent spondoolicks off of his own deeds!", Waterfield continues.

Winnie and Piglet, amidst an arduous attempt of evading arrest for their gruesome bloodsheds, have banded with Waterfield in May to have their illicit, unseen lives documented on the big screen for the first time in an R-rated, independent slasher documentary and plan to have it publicized as quickly as possible, though it is currently unknown when.

The first trailer for their upcoming feature, titled "Winnie the Pooh: Blood and Honey", has been released to the masses not long ago, and to several polarized reactions. "I'm eager to see Winnie the Pooh announce "it's winnin' time" and "poo" [sic] all over the floor", claims a pseudonymous user of the Internets.

"Blood and Honey" is said to document the tale of Winnie, Piglet and the gang, in Waterfield's words, "returning to their feral roots" after an adolescent Christopher Robin leaves the 100 Akre Wood stranded for university. Having not intuited the lay of the land, Robin and his newfound wife return to the woodland several years later, unbeknownst to them that Poo and Piglet have gone on a rampage. The undomesticated duo take note of Robin's presence and henceforth go on a rampage for his flesh. Amidst this, they alienate a gathering of girls residing in the woodland whom Poo and Piglet really want to shag. Oh, and Eeyore is also dead.

Not too long after the upcoming picture was announced, our director, co-producer and screenwriter Waterfield has also indicated his interest in producing a sequel, which he plans to "go even more crazy, extreme and over-the-top" with.