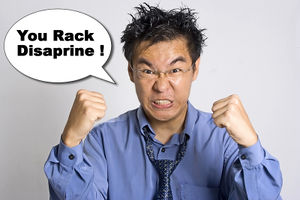 An Asian guy on Americans.

CAMBRIDGE, Massachusetts -- Scientists at Massachusetts Institute of Technology have concluded an eight year study a the popular excuse used by American students with bad grades, that "Asians are naturally smarter". Asian students in the United States are often accused of "blowing the curve", causing non-Asians grades to plummet

"Like many legends, this one has its origins in an element of truth," said Master Po, MIT lead anthropologist for the project. "It seems that Caucasians and the pure Asian race diverged recently, in evolutionary terms, in such a way that Asians are favored for study skills. The Negroid race diverged even further back in time, and was favored for athletic ability."

“Study skills and study strategies are abilities and approaches applied to learning. They are generally critical to success in school, are considered essential for acquiring good grades, and are useful for learning throughout one's life.”

While some scientists dispute the findings as racist, morally repugnant and daft, others embrace the conclusions as reasonable. "This data has been absolutely gone through with a fine-toothed comb," said graduate student Ira McDoogle of the MIT team. UnNews staff were unable to get a satisfactory explanation as to why a fine-toothed comb was applied to data, and wasn't it just a silly damned thing to do to data anyway?

Happy to leap on any signs of American weakness, Professor Kham Il Phoot of North Koreas Motherland Scientific Institute went one further, advancing the hypothesis that, "a pure Korean race is the most noble of all the races. We are like, super-Asians!"