UnNews:Weather Service Issues Hannah Montana warning for the southeastern US 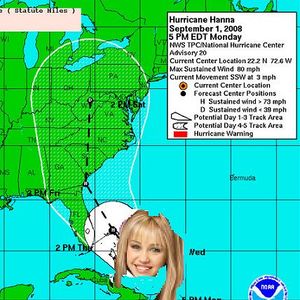 MIAMI, FL -- The National Hurricane Center in Florida has issued a series of watches and warnings to warn people about the approach of teenage sensation Hannah Montana. A Hannah Watch is posted along the Carolina coasts, while a Miley Cyrus warning was issued further north in Virginia and Maryland. "We're worried Hannah is really going to take the East Coast by storm," warned the Center's chief meteorologist Bill Read.

Residents living along the coast are urged to take necessary precautions, including buying earplugs and locking their doors. Computer models predict Hannah will approach the North Carolina coast on Friday, battering the region with heavy rains and high-pitched songs. "Sound levels could approach 150 to 160 decibels", a weather advisory indicated.

After moving inland, Hannah is expected to lose her popstar characteristics and downgrade to a Miley Cyrus. But residents in the Mid-Atlantic an North-Eastern states are warned that even as just Miley, the teenage storm still poses a threat. New York City mayor Bloomberg confirmed that local emergency workers and power companies are preparing for "high levels of douchiness, especially on Long Island." Likewise, the Governor of Virginia declared a state of emergency, allowing authorities to shutter all Disney stores.

The highly unpredictable nature of Hannah means that the storm's effect will be felt in a wide radius outside the center. "Expect heavy rain bands and flocks of pre-teen girls to congregate hundreds of miles from the stage," warned Chief Read. Some counties are planning on instituting curfews to keep the rowdy tweens off the streets.

People are advised to monitor National Weather Service bulletins and "US Weekly" for updates on Hannah Montana. The next advisory will be posted after a hurricane hunter aircraft with a crew of paparazzi on board takes pictures of Hannah later tonight. "We hope to get a clear shot of the center of circulation, if you know what I mean," expressed a hopeful forecaster.