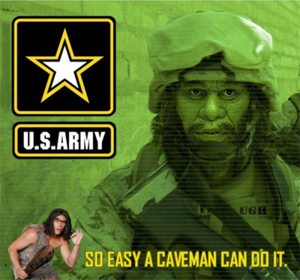 Rumors are circulating that the Army will lower its entry standards.

NEW YORK, New York -- Sources inside the Pentagon have revealed that the debt-ridden United States Army is looking to insure in GEICO for a bailout. "While it is true that we are implementing many cost-cutting measures already, the Army finds itself in an increasingly precipitous financial position," said Major General Fernald Lopez, Pentagon liason to the Government Accounting Office. "The GAO is looking into leveraged buyout proposals from three companies now, but we're only taking one seriously."

Financial woes dovetail nicely into another longstanding issue for all of the armed forces. Enlistments continue to fall, and many recruiters say that, were the standards lowered to allow "borderline morons and mental defectives", competent soldiers could be kept where they are needed, in hot combat areas. The "lesser qualified" could hold rear echelon positions, largely in the capacity of a labor pool.

Figures show that just by harnessing GEICO advertising machine for military use, the Army could be operating in the black by 3050. One hugely successful ad campaign, telling prospective customers that getting car insurance with GEICO is "so easy, a nuclear engineer could do it," is performing "amazingly well" in Army recruiting test markets.

"We'd actually be making money," said Kathy Dorado of the GAO. "In a few years, we could be competing directly with Blackwater (defense contractors)".