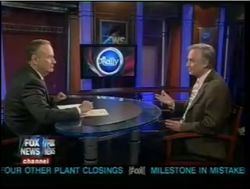 THE INTERNET- It is now 2007, and thus the race is indeed on to see who will succeed George W. Bush in the Square Oval Office. Therefore, it is only natural for the few, the proud, the Presidential hopefuls to step forward and strut their stuff. Sure, the primaries have not yet been cast, and, yes, indeed, who's to say that George W. Bush won't put forward an executive order allowing him to continue his regime past the Constitutional limit? But naturally, as the presidential election is nothing more than a popularity contest, we will now see how the candidatesthat matter stand in the eyes of the American public:

The cause Rudolph Giuliani's abysmal score is unknown, though it has been extrapolated from the front page that the site is not officially that of Former Mayor of New York. Evidence supporting this is the use of the song "We Got Rudy" by Kaptain Christopher, which is mainly extemporaneous recorded blather being played back over the vocal line "We got Rudy/We got Rudy/We got Rudy/Yes we do/We got Rudy/How 'bout you?" listen as well as the fact that the site altogether lacks the professionalism expected of a presidential hopeful.

Back on point, however, this data offers incontrovertible and completely incontestable evidence that, in the end, Barack Obama will lose out to Dane Cook:

Presidential MySpace pages are no different than regular MySpace pages in that they all highlight the good qualities, real or imagined, of the person about whom the page is. For example, the following is excerpted from Barack Obama's "favorite books" section:

The conceit of this travesty is paralleled in every president's MySpace page. Take, for example, Hillary Clinton. Similarly misguided, in her biographical section (which is, by definition, meant to be factual), she states (as fact) "A frontrunner in the 2008 Presidential Election"

Inversely, often some candidates are too honest. One, for example, gives his religion as Catholic. Rookie mistake, friend. Rookie mistake. Another gives his true age, which, being the somewhat large number of 70, is also quite deterring. (editors note: in this paragraph alone, names have been censored because the contributor of the article couldn't remember the names of the people that he was talking about).