South Carolina, USA - Today, as a sign of the times that politicians really have run out of important things to talk about, the Democratic Presidential Candidate Hopefuls participated in a debate of popular video-sharing webstite YouTube. The debate has been highlighted in most of the World's media as a sign that potential Presidents might be in touch with their people, however, in a recent poll, most were skeptical of this ever happening. The debate focused on the candidates view's of the nouveau riche of the internet world, and their personal experiences with technology. The debate went ahead successfully, despite one incident of goatse being blasted onto the participant's faces.[1] 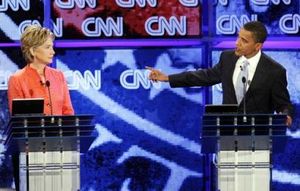 Obama:"Now, you can see here the signs of tyranny and repression- No, Hilary, I was gesturing towards this large screen behind me."

Their hosts, CNN, have been subjected to a recent whisper campaign, which alleges that the debate is all part of a widely orchestrated attack on YouTube, et al.. In retort, Jonathon Klein, the president of CNN in the US, said: "We at CNN categorically deny these rumours. They are nothing more than the claptrap you'd find on places like YouTube, anyway ... it's not our fault if people think YouTube is a load of crap, which is correct, of course."

Some Presidential Candidate Hopefuls did better than others. Hilary Clinton, widely perceived to be one of the more conservative, and old-fashioned Democratic Candidate Hopefuls, struggled to make herself seem convincing to the audience, widely helped by the fact that she thought that YouTube was a device for the artificial insemination of cows, and ranted on about agricultural reform for over three quarters of an hour.

As a complete contrast, Barack Obama, the widely hyped underdog, couldn't help but shout out technological buzzwords, even at the cost of his ability to make coherent sentences. "Yes, well, you see, thanks to Web 2.0, social networking, viral videos, extrasensory perception, lifting the corporate veil and much else adds all to much more bling bling in the pocket," he said, widely believed to be referring to the large sums of money he had fundraised off the internet, "This extra interconnectedness allows for the average, John Doe, to be able to alleviate his or her extrapolarity through the solidarity of fibre optics." Nevertheless, he received rapturous applause, and was seen as the most successful candidate at the evening.

Today's debate has been hailed as nothing sort of revolutionary. "We have seen the common man re-connected, in the modern age, with his superiors," proclaimed one particularly ecstatic campaign staffer. "It is a new dawn for American politics!" said another. Although, after further questioning, none could give a valid reason as to why, and became angry at this intrusiveness.

However, the concerns of the public have been worrying. One particular questioner, who had been barred from entering the debate, as he was not a member of the press, decried the whole incident to be nothing more than a "sham. A complete and utter waste of space, just to make themselves look good! Vote Republican!", before he was forced out of the way by a bouncer, who told him that common people weren't allowed in such nice places.